The Kumbh Mela: the largest human gathering on the planet ever!

Considered to be the oldest “living” religion in the world, Hinduism was started at least four thousand years ago and today it is classed as the third largest world religion with about 900 million Hindu followers worldwide. By chance, it so happened that Lewis the Lion and Helen were travelling in India when there was a very important Hindu religious gathering or pilgrimage; an event that comes around only once every 12 years in the city of Allahabad, the Kumbh Mela or the Magh Mela. It was indeed so big that it was dubbed ‘the largest gathering of people ever on the planet’ with over 100 million people attending over a 54 day period! Lewis the Lion didn’t have to think twice at this opportunity of a lifetime when Dushyant suggested a change in their itinerary – of course he would go and find out what it was all about! In fact Dushyant suggested that the mere fact that these particular travellers were in India at this time so that they were able to attend this festival, meant that they must have done some good karma in a previous life.

Some of the travellers were a little bit too nervous to go on this journey as with so many people in attendance, they were worried about the security at the venue. What if there were crowd surges or crushes? However, they need not have worried as in spite of the vast numbers of people it didn’t seem too busy and there was a calm atmosphere with sufficient area to freely move around. So after another 2 and a half hour car journey (it’s approximately 150 kilometres between Varanasi and Allahabad), the depleted G-Adventures group arrived on the outskirts of Allahabad. They could see vast encampments along the sides of the river banks that stretched on for miles and miles.

So why were so were there so many pilgrims travelling to Allahabad during this time in February 2014? Lewis the Lion was keen to learn more. From what he understood, that pilgrims travel here to bathe in the sacred river and that the location changes every 3 years in rotation between four places. Thus the Kumbh Mela is held at each of these four places every twelfth year. However, this is a particularly special point as it is where three rivers converge: rivers which Hindus believe to be sacred. (The Ganges, the Yamuna and the mythical Saraswati River). Furthermore, Hindus believe that if you bathe at this point in the holy rivers at this particularly auspicious time, you will break the cycle of reincarnation when you die and will ascend directly to live with God in heaven. No wonder it attracted so many people!

The group arrived beside a girls’ school near the river bank and they were very excited to meet the tourists and Lewis the Lion. Even though he didn’t speak their language, being the friendly lion that he is, he was soon communicating with them and playing games! Meanwhile there was a quick toilet stop for the travellers – perhaps the most basic of any that Lewis the Lion had encountered on his travels to date. Quite simply, it was a concrete step that was surrounded by a screen!

Shortly afterwards, Lewis the Lion set off on a boat down the river to the point where the three holy rivers converge so that he could witness the pilgrims bathing in the water. On the way there, Dushyant showed the group how to feed the birds. The Hindu superstition is that if you take care of the birds and feed them, it will bring you wealth and you will never be short of money nor friendships. On the boat, the group enjoyed some snacks, including some orange-cream biscuits – Lewis the Lion was reminded of children’s birthday parties when he was an even younger lion cub!

We they arrived at the point where the rivers converged, they pulled up besides a mele of boats and stumbled out across the sandbags lining the shore. Although there were a lot of people, surprisingly the event seemed to be very calm indeed. Just like in Varanasi, there seemed to be an aura of spiritual reverence in the air. Lewis the Lion saw lots of families taking the dip together, as well as religious men wearing orange who had shaved their hair, offering it up to the Ganga. Other offerings were coconut husks and carnation flowers. Donations were being collected but Lewis learnt that in Hindu tradition, you should only ever a give an odd amount as then the money will come back to you at another time. Helen bought some holy Hindu fruit to try. It was a huge cylindrical root that was cut in round disks. Helen described it as a type of sweet tasting root. Hindus believe that this is one of the plants which Rama ate in the forest during his 14-year exile.

Lewis the Lion was then surprised to see some naked gurus or sadhus. ‘Why were they not wearing clothes?’ he questioned. It is believed that certain religious people or spiritual leaders reach such a state of enlightenment through their religious practice that they need no longer need worldly possessions, not even clothes! One of them in particular was covered in a white dust from the ashes of cremated bodies and had his hair bundled up on the top of his head. As Hindus, Dushyant and Seetal both went to him to request a blessing. They bowed down to him and he slapped them thrice on the back, giving them both an ash bindi and a handful of ash as you can see in the picture gallery below! 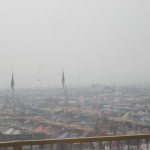 Encampments at the Kumbh Mela 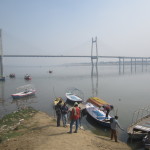 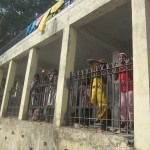 Curious children look out over the railings 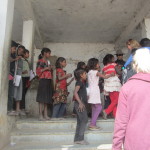 The pupils are happy to greet the travellers 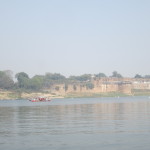 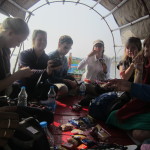 Snacks on board the boat 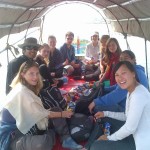 A picnic on the boat to the Kumbh Mela 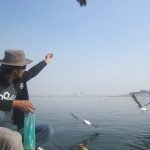 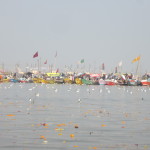 A mele of boats, birds and flowers 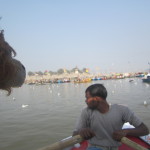 Lewis the Lion approaches the sandbanks of Allahabad 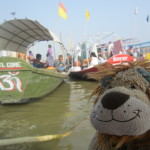 Many boats bring the pilgrims 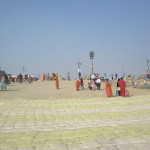 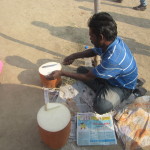 Rama’s holy fruit – the root of a tree 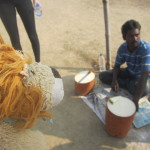 Lewis tries a slice of the holy fruit 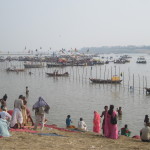 People arrive on boats by the water’s edge 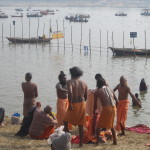 A group of monks prepare to take the dip together 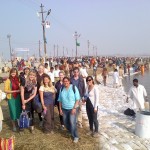 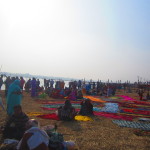 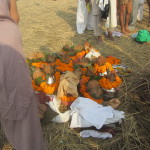 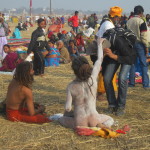 Dushyant is blessed by a sadhu 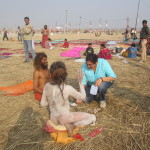 Seetal also takes a blessing from the sadhus 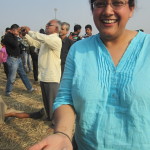 Seetal is blessed with holy ashes

It was now time for Dushyant, a practising Hindu to bathe in the sacred waters but Lewis the Lion wondered if any of his friends might join him…? Check out Lewis the Lion’s next blog to see what happened next!

Have you ever attended a large gathering of people? What was special about it? Why were there so many people there?

Helen Molloy has been a Primary Learning and Teaching Consultant, leading on the introduction of Primary Languages in the City of Stoke-on-Trent for the past 5 and a half years. She is passionate about language learning and inspiring children into developing a curiosity and awareness of other people's languages and cultures.
View all posts by Helen Molloy →
This entry was posted in Lewis' Blog and tagged Allahabad, children's travel blog, educational travel blog for children, for kids, Hindu, Holy Dip, India, Khumbh Mela, Lewis the Lion, Magh Mela, pilgrimage, sacred river, travel blog, travel blog to inspire kids, travel stories to inspire children, travel writing for children. Bookmark the permalink.