Like Portuguese, Lewis learnt that Spanish is a Romance language. It is also called Castilliano after the region it derived from, Castile, in Spain. Today, Spanish is the second most widely spoken language in the world by native speakers, with Mandarin Chinese being the first. Currently, it is estimated that 400 million people speak Spanish as native speakers with 500 million speakers worldwide.

To learn some basic Spanish, visit the Newbury Park website: Language of the Month and click on the Spanish link.

Seeing as this is the case, Lewis the Lion has decided to dedicate the majority of his trip away in Spanish speaking countries, i.e. in South America in order to learn Spanish.

However, with Spanish being so widely diffused, there are differences in accents and words according to where the speaker comes from. Lewis the Lion has started to realise this as he travels through South America as people sound different to the accent he has been used to from his friends in Spain.

Nonetheless, whether he says things with a Spanish or South American accent, his three magic words can still be understood. They are:

In South America, like in the South of Spain, the ‘c’ sound like in the word ‘gracias’ is pronounced as a ‘s’ sound and not as a ‘th’ as in other parts of Spain.

Here are some of the other differences that Lewis the Lion has noticed in some of the countries he is travelling in.

Spanish in Argentina and Uruguay

Good morning – Buen día (instead of ‘Buenos días’ in Spain)

Goodbye – chau (instead of ‘Adíos’ in Spain)

a strawberry – una frutilla (instead of ‘fresa’ in Spain)

The Argentines and Uruguayans also have a different way of saying ‘you’ in the second person. Instead of saying ‘tu’ they say ‘vos’ and there are different corresponding verb conjugations, e.g.

People often call each other ‘Che’ which means ‘Mate or Pal’ A very famous Argentine revolutionist was nicknamed ‘Che’ Guevara. 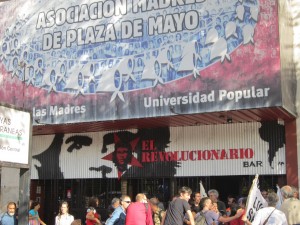 Chilean Spanish has a distinctive accent unlike some of the other neighbouring Southern American countries with only slight variations from the north to the south. They also tend to speak very quickly!
The most noticeable difference is that Chileans often drop the final syllables and “s” sounds so it often sounds as if words have been chopped in half! For example:

In Chile they also have lots of distinctive words, e.g.

A colloquial phrase used to show agreement, e.g. ‘of course’ is ‘si po‘

‘No ma‘ is often a filler word meaning ‘don’t worry about it.’

Some consonants in Chilean Spanish have a soft pronunciation.

Spanish in Bolivia and Peru

Lewis the Lion noticed that the Spanish seemed a little easier to understand when he got to Bolivia and Peru as people seemed to speak more clearly.

He also noticed that they had a way of making many words diminutives, e.g. “un ratito” or “un momentito” – “in a little moment”

Another thing that he noticed more as he travelled here was that when people were using the polite form, i.e. to a stranger, they would use the third person singular (Usted) or the third person plural (Ustedes).

Spanish in Ecuador
Just like in many other Latin American countries, Lewis the Lion noticed that people addressed each other very politely using the third person singular and plural in Ecuador.
However, he also learnt some slang words from his friend Pablo which he thought was rather fun so here are some of the words he learnt!

Vacilar – to hang out with friends

Hablas huevadas? – Are you serious?

One Response to Spanish in Latin America