In South American countries like Bolivia, Peru (and part of Chile and Argentina too), Aymara and Quechua are also recognised as official languages, like Spanish. Not wanting to fall short of his language challenge, Lewis the Lion talked to many local people who taught him the “magic words” in these Andean languages too.

Here are some photos of him learning Aymara on la Isla del Sol, Bolivia: 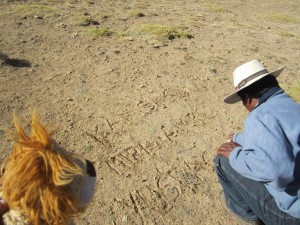 Jorge writes the “magic words” in the sand 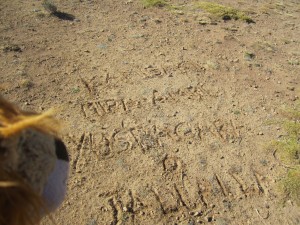 Lewis learns Aymara from Jorge’s writing in the sand 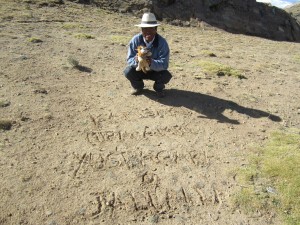 Jorge and Lewis with the magic words in Aymara

Here is a sign on the Floating Islands in Peru with one of the magic words too! 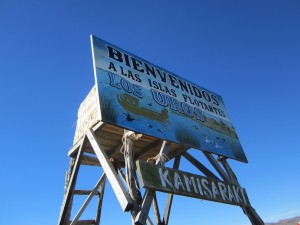 They magic words in Aymara are:

Kamisaraki – Hello (It really means “Hello. How are you?”)

Jorge’s top tip for learning Aymara is that some of the words sound a bit like Japanese!

Lewis the Lion also liked listening to the sound of Aymara as it had a strange series of clicks in the language. 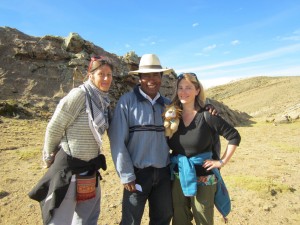 Lewis poses with Jorge his Aymara teacher, along with Helen and Aurelie

Lewis the Lion particularly enjoyed learning Quechua when he stayed on the Peruvian Island of Amantani, where the family he was staying with taught him the following magic words: 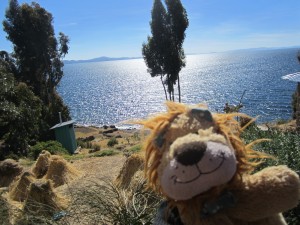 Lewis and the view from his family’s home on Amanatani

Lewis found that when practising these new words, it helped him to break them down into syllables first, e.g. the word for “thank you” in Quechua “yusparasunqui”, he learnt it by sounding out the different syllables and sounds:

What would help you remember these new words?

Here are some animal words that Lewis the Lion also learnt in Aymara and Quechua too. Notice that some of the animals are particularly important in South American culture!