Lewis the Lion knows how important it is to be kind to other people and especially to help people who are in trouble. Well that’s exactly what happened the day that Lewis learnt some of the language spoken on Easter Island – Rapa Nui or as the locals (Pascueñas) call it, Re’o maohi. This language has Polynesian roots seeing as Easter Island is in the middle of the Pacific Ocean. 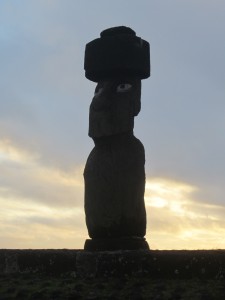 Easter Island is famous for its mysterious Moai statues

Lewis the Lion and his friends were happily driving home after their sight-seeing visit of the island when they were flagged down by a big truck. It had broken down and needed help to be towed to the nearest town. Luckily, Lewis the Lion’s friend, John, was able to help the stranded workmen and they attached a cable in between the vehicles so that the truck could be towed.

While this drama was going on, Lewis spotted a beautiful rainbow arch high over the countryside and was admiring it when some of the workmen wanted to know who he was. “I’m a travelling lion and I’d love to learn some of your language whilst I’m here,” he told them. 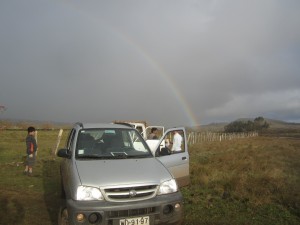 The workmen with their children were more than happy to help Lewis the Lion seeing as his friend had already been so kind as to stop and help them with their broken down truck. The children especially made sure that Lewis knew how to pronounce the words properly and this is what they taught him.

Rapa Nui (Language of Easter Island) – Re’o maohi
Welcome/ hello/ goodbye – Iorana
Please – It doesn’t exist in Rapa Nui but they adapt the Spanish and it sounds like ‘por favaure‘
Thank you – Maururu
How are you? – Pehekoe
Good/ Fine – Riva-riva

The children told Lewis the Lion that often words are repeated twice in Rapa Nui, such as ‘riva-riva.’ 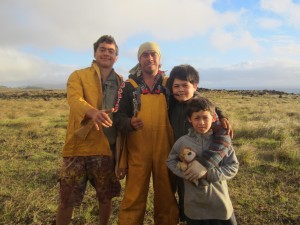 These Pascueñas teach Lewis the Lion some words in Rapa Nui

Whilst Lewis the Lion was on the island, he also learnt some other useful words that were linked to the culture. Here is a list of them:

Ahu: a shrine or a platform
Moai: a monolithic statue
Pukao: a hat, or a topknot (like what you see some of the moai statues wearing on their heads)
Pipi Horeko: stone landmark
Ana: a cave
Hare: dwelling (in general)
Hare Vaka: boat-house
Hare Moa: chicken-house
Tupa: observation tower

He was also impressed one evening to be entertained by some traditional Pascueñas called Karikari who wore traditional clothes and then sang, danced and played music. Here are some short video clips so you can hear them singing in Rapa-Nui too.

Lewis the Lion watches a traditional show in Easter Island

At the end of the night, Lewis the Lion’s friends, Singa, Helen, Gemma and Karim even got to try out some of the musical instruments themselves! 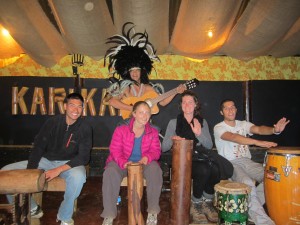