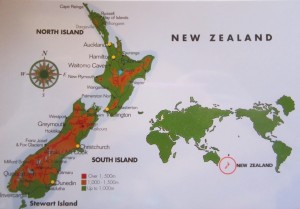 Where New Zealand in the world

Even though New Zealand has two official languages, English and Maori, Lewis the Lion discovered that like in America, sometimes the New Zealanders have different ways of saying things in English.

They also have a different accent which sounds a bit like a mixture of Australian, South African, Irish, Scottish and Maori! For instance when they say ‘New Zealand’ it sounds like they’re saying ‘New Zilund!’ Lewis the Lion thought that it sounded as if the final syllable in a sentence would extend on or rise up.

Luckily for him, his magic words remained the same as British English (or almost! See below for some variations!) so that was easy enough but here are some of the words that he found were different, particularly in less formal speech:

a Kiwi – a New Zealander

Chur bro – cheers, thanks or that’s cool, my friend

Superette – a mini-supermarket or corner shop.

He also heard these common expressions in New Zealand.

No worries – Don’t worry about it/ No problem

Tiki tour – to drive around taking the scenic route

The word eh is used at the end of rhetorical questions, e.g. Last night was sweet as, eh?

Shortened words often add an -ie to them, like pressie for present and cuzzie for cousin.

To hear what a New Zealand speaker sounds like, click on this link where you can listen to different sound files.

Maybe you could have a go at saying some of these New Zealand words with a New Zealand accent too?! 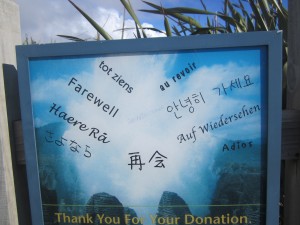