Lewis the Lion learnt on his travels that body language is sometimes as important as the words you use. This was particularly true in Thailand, especially as there is a special cultural way that you greet people called the “wai.” This is when you put your hands together as if in prayer and bow to the person to show respect. The higher the hands are placed, the more respect you show. Generally, it is the person of lesser importance who should instigate this ritual.

However, Lewis the Lion did find Thai one of the more trickier languages to learn because like some other Asian languages, tones and inflections are important in the way you pronounce it. To the untrained ear this can be very difficult so the best thing to do is to listen as carefully as possible and mimic! The Thai writing system is also different and so sometimes the way you say things isn’t exactly how it is written in an English version of the Thai script!

A Thai Coke can written with the Thai script

First of all though, he learnt that it is important to know that phrases end in khap for a man, krub for a boy and ka for a girl or woman.

Here are some of the magic words that he then learnt:

Sometimes he heard people just repeating the last word several times for thank you, e.g. “Khap, khap!” He wondered if that was more informal, rather like the way the English might say “Cheers” or “Ta”?

Some other phrases and words he learnt in Thailand were the following:

Do you speak English? Khun-poot-pa-sa-angrit-dai-mai-khap/ka?

Where is the toilet? Hawang-nam-yoo-tee-nai-khap/ka?

Other words he learnt because of the places he visited were: 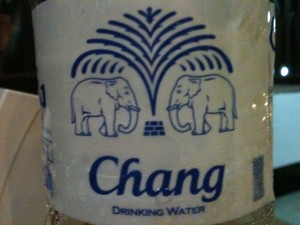 Chang is the Thai word for elephant

Some of the animal names he learnt were:

He especially loved the names of these two animals:

He also learnt some words linked to food and Thai cooking but he will tell you more about that on his blog!