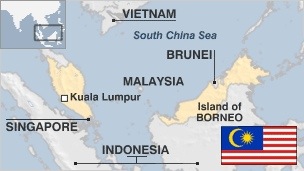 Lewis the Lion hadn’t originally planned on going to Malaysia as part of his worldwide trip but he is certainly glad that he did as it came as a very pleasant surprise. Here are some of the things that he found were particularly interesting:

*The capital Kuala Lumpur (affectionately known as K.L.) was bigger and brighter than he had imagined, with huge shopping malls, food courts and a very efficient monorail
*The famous twin Petronas towers in K.L. are a true symbol of Malaysia moving into the developed world
*Malaysia is one of the world’s largest palm oil producers and you can see palm trees all over the country
*Being close to the Equator, Malaysia has a tropical climate: hot and humid!
*Lewis the Lion also discovered that the Malaysians also make a great cup of tea when he visited the tea plantations of the Cameron Highlands
*Malaysia is made up of the mainland and several islands
*Lewis the Lion loved driving through some of Malaysia’s tropical rainforests, especially on the island of Tioman. 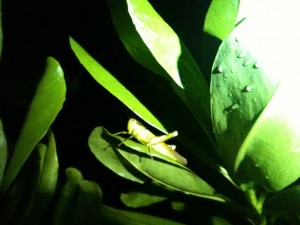 A huge cricket perches on a leaf near the Tioman rainforest