Lewis the Lion waves goodbye on his final sunset

The moment had come. Lewis the Lion’s adventure was almost drawing to a close. He’d savoured and relished each moment of his last few days in Palolem and had already taken in the sunset on most evenings from different vantage points along the bay. However, tonight was a little bit different. He knew that it was the last time he would get to enjoy the sun setting on India for a while. Even though he’d be travelling to Mumbai the following day, this was his final opportunity to watch the sun set over the sea in all of its magnificent glory.

So, he padded across the beach one last time. To his surprise, he had to cross over what he thought was a shallow puddle but the incoming tide soon swept in and Helen had to raise him and her camera above her head to prevent them getting soaked! An adventure right to the last minute! Luckily, they had met up with some guys who were also doing the same thing: going to see the sun set and so they made sure that Lewis the Lion and Helen were OK. They then scrambled up some rocks to another fabulous view out to sea as the red sun was just about to set in the sky. It seemed like the whole town had had the same idea that night as Lewis the Lion and Helen also bumped into some friends they had made in their yoga classes: Claire and her mum. They were all here to enjoy one of nature’s delights. The sky turned a deep crimson and Lewis the Lion was sure that this was perhaps the most wonderful sunset of his whole adventure. See the photos below and see what you think. 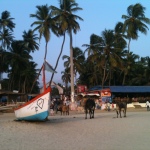 Cows stray onto the beach 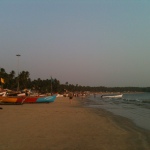 Casting a glace back at Palolem beach 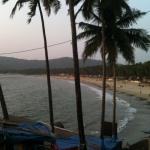 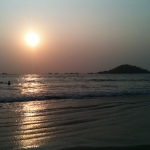 The setting sun reflects off the incoming tide 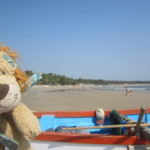 Lewis the Lion chills out for one last evening in Palolem 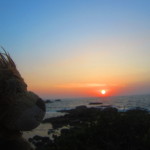 Lewis the Lion watches the sun set over Palolem 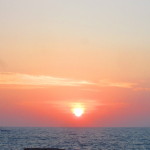 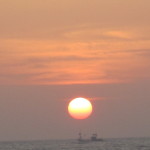 Lewis the Lion’s last magnificent sunset of his worldwide adventure

As the warm breeze, lightly lifted his mane, Lewis the Lion felt as happy as he had ever felt in his life. As the Earth rotated around the sun, Lewis the Lion reflected that wasn’t it a strange concept, that that same sun had accompanied him his whole journey long? And sure enough, the world would continue to spin on its axis on a daily basis and continue on its yearly orbit around the sun. Like the time Lewis the Lion had been in the Atacama Desert in Chile, he suddenly felt incredibly small in this vast universe. He only prayed that for each setting sun from this day forward, that every person and creature in the world would feel the same level of happiness in their lives as he felt on that particular evening.

If you could offer a prayer up to the universe, what would it be?

Helen Molloy has been a Primary Learning and Teaching Consultant, leading on the introduction of Primary Languages in the City of Stoke-on-Trent for the past 5 and a half years. She is passionate about language learning and inspiring children into developing a curiosity and awareness of other people's languages and cultures.
View all posts by Helen Molloy →
This entry was posted in Lewis' Blog and tagged beach, children's travel blog, Earth, educational travel blog for children, for kids, India, Lewis the Lion, Palolem, sunset, travel blog, travel blog to inspire kids, travel stories to inspire children, travel writing for children, universe. Bookmark the permalink.