As Lewis the Lion ventured into Malaysia, he realised that his magic words really did have a positive impact on the people he met as they genuinely warmed to him when they could see him trying to speak their language.

He learnt that by learning some Malay or Malaysian, it also helped him when he went to Indonesia as Malaysian comes from the Indonesian language family. (He learnt that the main difference is in the vocabulary as the grammar is quite similar: Malay was more influenced by Arabic and English and Indonesian was more influenced by Dutch and Javanese).
Malay is the official language of Malaysia and Brunei whereas Indonesian is more widespread with 230 million speakers (from Indonesia and parts of East Timor).

Here are some words which he discovered remained more or less the same in the two languages (but he’s sure that if he were a native speaker he would be able to tell the difference in the accent at least!): 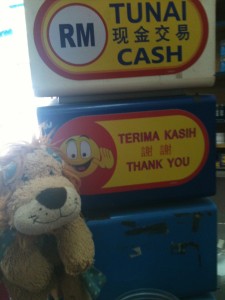 Terima Kasih -Thank you in Malay and Indonesian

Some other words he learnt that were useful in Indonesian were: