Sunrise over the River Ganga, India

Lewis the Lion was up before the sunrise the next day. In his sleepy state, he was up at 5:30 am and ready to take a tuk-tuk into town for 6 o’clock. Again, he headed down to the River Ganga to the same spot, only this time he was here to see the sunrise. Once again, he got into the same rowing boat as he had done the night previously and once again, he took part in a candle flower ceremony. This time however, he had a little more luck as the candles were released into the water without a problem. Let’s hope Lewis the Lion’s secret wish comes true!

To his shock, he saw a dead body floating past him. Apparently the bodies of holy men don’t get burned in Varanasi but return naturally to nature. Nobody seemed to bat an eyelid here: this is just common practice. As the boat, travelled along, he saw more funeral pyres along the way. The thing that struck Lewis the Lion more than anything was the calmness of the river, in contrast from the hustle and bustle and noise of the city just hidden behind the steep steps.

Lewis the Lion was awestruck as he saw the red sun rise, casting a beautiful light across the scene as people took their sacred dip in the Ganga. Many Hindus had now started to gather and were taking their holy dips in the waters of the Ganga. They often entered the river fully clothed, women in particular who wore their saris. Lewis saw a husband and wife taking the dip together. Dushyant explained that if Hindu couples do the dip in the Ganga together, it is thought that they will be together in the next life.

Gradually as the dawn broke, more and more people gathered on the ghats and the city once again seemed to be a hive of activity. Disembarking from the rowing boat and climbing the steep stone staircases, Lewis the Lion was surprised to see that locals had gathered in a square overlooking the river and were rollerblading! Who would have thought that in such a spiritual city?

Needless to say, the pilgrims were well catered for as they were filling huge plastic containers with water from the river as souvenirs for them to take with them. Many flower sellers also gathered by the river banks so people could make their offerings to the river.

Lewis gratefully received a traditional cup of chai masala (a spicy tea) served by the roadside in a ceramic cup. What a wonderful way to end a wonderful morning! However, the day had only just begun as Lewis will tell you about in his next blog… 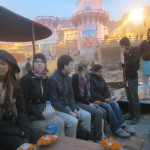 Another candle flower ceremony at sunrise

Early pilgrims take the dip from the ghats of Varanasi 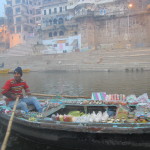 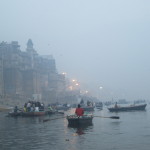 The dawn brings people to the river 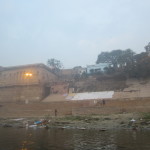 Sheets are spread out to dry on the river banks

A monk sits in prayer by the Holy River 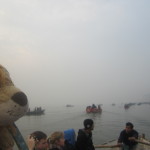 Lewis watches the rowing boats on the River Ganga 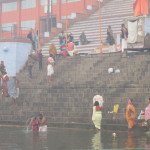 A couple take the holy dip together 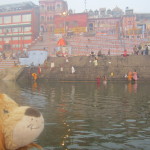 Lewis the Lion watches the couple taking the dip together 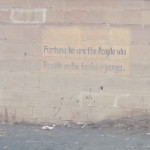 A slogan on the banks of the Ganga 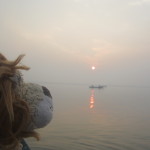 Lewis watches as the sun rises 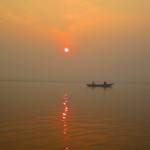 Sunrise over the River Ganga 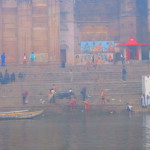 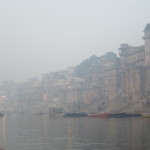 Along the ghats of Varanasi

The crowds start to amass 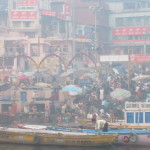 The city comes to life with the dawn 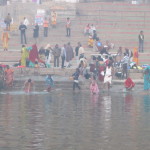 Hindus take the holy dip in the River Ganga 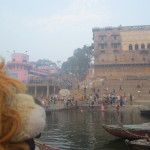 Lewis the Lion watches as people take the holy dip 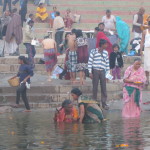 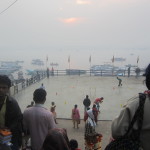 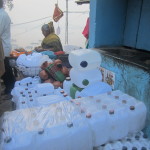 Holy Water is taken as a souvenir 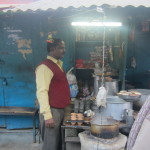 Chai masala is served on the streets of Varansi 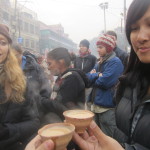 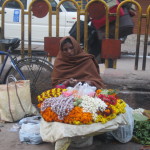 If there is such a thing as reincarnation, who or what would you like to become in the next life and why?

Helen Molloy has been a Primary Learning and Teaching Consultant, leading on the introduction of Primary Languages in the City of Stoke-on-Trent for the past 5 and a half years. She is passionate about language learning and inspiring children into developing a curiosity and awareness of other people's languages and cultures.
View all posts by Helen Molloy →
This entry was posted in Lewis' Blog and tagged boat, children's travel blog, educational travel blog for children, for kids, ghats, Hinduism, Hindus, Holy Dip, India, Lewis the Lion, pilgrims, reincarnation, sunrise, The River Ganga, travel blog, travel blog to inspire kids, travel stories to inspire children, travel writing for children, Varanasi. Bookmark the permalink.