Helen takes the holy dip at the Kumbh Mela!

As a Hindu, Dushyant felt very lucky to be in Allahabad during this auspicious time on the calendar. Normally his work could take him all over India so he saw this as an extremely lucky coincidence that he’d ended up in this area at this special time so that he could bathe in the sacred waters. He asked if any of the other members of the group would also like to join him as he was about to wade into the waters?

Ceasing the opportunity, as when else was she ever likely to be in this part of the world at this particular time in her lifetime? Helen, Lewis the Lion’s friend and travel companion, decided that she too would join Dushyant. Life was for living after all and she was not going to let this once in a lifetime opportunity pass her by. This seemed to cause great amusement with the local Indians who seemed to gather in a large crowd on the sandbags as the pair prepared to enter the water, with Helen stripping down to her leggings and vest top. It was very rare to see a Western, caucasian woman entering their sacred river! 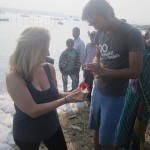 A paper boat offering to the River 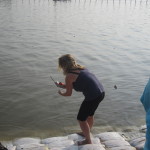 Gingerly Helen places her paper boat in the water

Helen laughs as the paper boat tips over!

Dushyant gave Helen a paper boat filled with a clay candle holder, flowers, sweets and incense sticks to offer as a gift to the river. He also had one and when they had lit the flammables, they made a wish and set it off into the waters. Helen laughed as hers promptly toppled over! ‘Maybe she was making the wrong wish?’ she questioned, bemused.

Lewis the Lion on the other hand kept a safe distance from the water’s edge. It looked very murky and he definitely wasn’t tempted. He worried if Helen might get ill when he thought of all the people who had already bathed in the water. Dushyant however reassured her that these were sacred waters with healing properties and she would not get sick.

At first, Helen gingerly approached the end of the sandbags, building up her courage to wade into the water. She stopped to gain encouragement from a local lady and then gradually, edged herself into the water. At first she felt a shiver as the water was cold but it was tolerable and she soon got used to it as she waded further in. 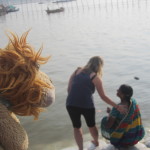 Helen talks to a lady before she enters the water 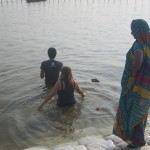 Dushyant and Helen wade into the cool waters 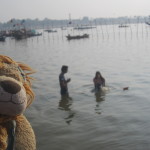 Helen pinches her nose and dunks herself

Helen then faced the crowd, seeing Lewis the Lion as he watched her and Dushyant told her to dunk three times, saying a prayer each time: once for the souls in heaven, once for the souls here on earth and once for the souls in hell. He then told her to fully submerge herself again and say a prayer for each desceased member of her family. Pinching her nose and taking a sharp inhalation of breath, she dunked, and dunked and dunked, being careful to make sure that her top was kept down too! She then filled up a bottle of the water from the river for her friend, Seetal, so that she could take it home with her. 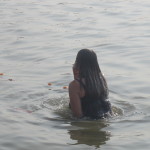 Helen then dunks at least half a dozen times! 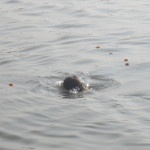 Helen makes sure she is fully submerged each time 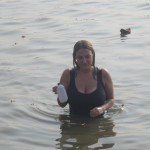 Helen fills up a bottle of water for her friend Seetal

Many thoughts went through her head she told Lewis the Lion afterwards, especially the fact that she couldn’t quite believe that they were on their penultimate week of their worldwide adventure and who would have thought that they would ever have achieved so much or lived out so many of their dreams? It seemed like a really fitting way to finish off their trip as she was filled with such gratitude in her heart and gave thanks to God. 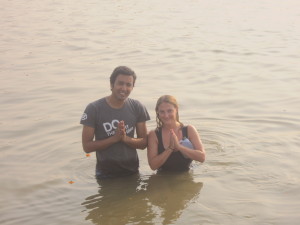 Dushyant and Helen are pleased to take the holy dip together

Even though Helen had been brought up as a Catholic she found it interesting to reflect on the similarities between the Hindu faith and Christianity. So much unites us rather than divides us as she could see so many parallels. For instance, Christians believe in the Holy Trinity (God the Father, God the Son and God the Holy Spirit) whilst Hindus also believe in three gods in one (God the Generator, God the Operator and God the Destroyer). Both religions also share a faith in the heavenly afterlife. As a Hindu, Dushyant told Helen that even if I didn’t believe it now, he promised her that at the end of my life she will know what a great deed she had done that day by bathing in the sacred waters. Taking the holy dip at this special time promises to break the cycle of reincarnation so that the soul can ascend directly to heaven to be with God. ‘What a wonderful thought that is!’ reflected Helen. ‘I’ll pray that he is right!’ 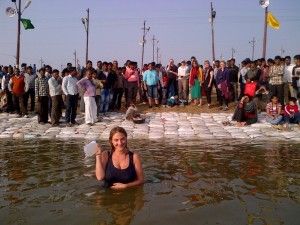 Helen takes a dip in Allahabad, where the three sacred Hindu rivers converge

As the group then proceeded back to the boat, Helen seemed to have found her ‘inner-Indian’ as the seagulls flocked to her as she called out ‘Oi,oi, oi!’ scattering the birdfeed into the water. 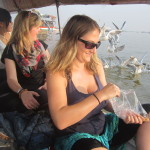 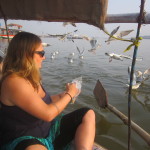 Helen feeds the birds according to Indian superstition 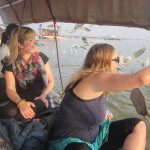 The birds flock to Helen as she feeds them

Changing into her dry clothes at the docking area, before the group caught the bus back to Varanasi, Helen told Lewis the Lion that she wasn’t sure if she’d had a spiritual or enlighening experience but what she did know was that they were both truly, truly blessed to have had to the opportunity to travel as they had done so far, and for this she would be forever grateful! 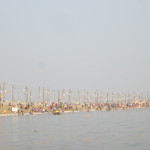 Surveying the banks from the boat 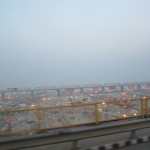 Leaving Allahabad after an enlightening day

To find out more about the Kumbh Mela Allahabad, click on this link.

What fills you with a sense of gratitude for the life that you have?

Helen Molloy has been a Primary Learning and Teaching Consultant, leading on the introduction of Primary Languages in the City of Stoke-on-Trent for the past 5 and a half years. She is passionate about language learning and inspiring children into developing a curiosity and awareness of other people's languages and cultures.
View all posts by Helen Molloy →
This entry was posted in Lewis' Blog and tagged Allahabad, children's travel blog, educational travel blog for children, for kids, Hindu, Holy Dip, India, Khumbh Mela, Lewis the Lion, Magh Mela, pilgrimage, sacred river, travel blog, travel blog to inspire kids, travel stories to inspire children, travel writing for children. Bookmark the permalink.