Lewis experiences the heat of a ‘fake’ volcano!

As Lewis the Lion and Helen left the Mirage theatre after seeing the spectacular ‘Love -The Beatles’ Cirque du Soleil show, would you believe it, but they had another unexpected surprise? They had managed to time it just right to see one of the hourly free shows outside the Mirage Hotel, only this time it was of a volcanic eruption! 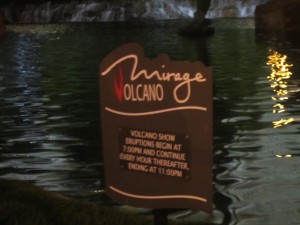 Lewis the Lion wondered how on earth they had managed to create such a thing? 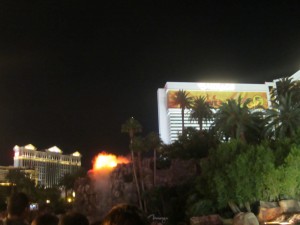 The volcano gradually seems to heat up

He thought that it was perhaps just a clever trick with lights but as he stood there watching beside the water, he could definitely feel the heat too. 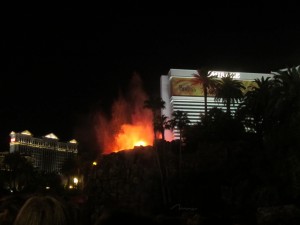 It really did feel like a real fire heating up and he almost believed that they had created real magma to cleverly shoot out and flow out of their fake volcano as you can see in these photos. 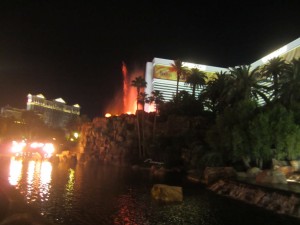 Jets of fire shoot out from the top of the volcano

How did they do it? He didn’t know. But like everything in Las Vegas he thought that it was an incredibly good replica! 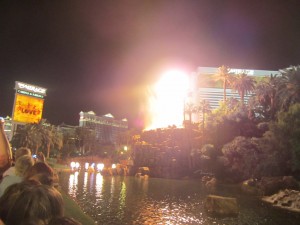 Although Lewis the Lion can’t transport you to Las Vegas, he wants you to watch these video clips that he has posted on You Tube and he wants you to imagine how hot the fire really was. It wasn’t just noise and light but the fake-volcano gave off real heat too as if it really were molten lava erupting out of the top of it!

Click here to see the start of the volcanic eruption show.

Click here to see the spectacular end to the volcanic eruption show.

Even though Lewis the Lion knows that this was a ‘fake’ volcano, he thought that it was a very good model of replicating the real thing.

Do you know why volcanoes erupt in the first place?

See if you can do some research to find out why.

(If you are stuck, look at Lewis the Lion’s waterfall blog of when he was in the Yosemite National Park for help!).

Helen Molloy has been a Primary Learning and Teaching Consultant, leading on the introduction of Primary Languages in the City of Stoke-on-Trent for the past 5 and a half years. She is passionate about language learning and inspiring children into developing a curiosity and awareness of other people's languages and cultures.
View all posts by Helen Molloy →
This entry was posted in Lewis' Blog and tagged children's travel blog, educational travel blog for children, Las Vegas, Lewis the Lion, Mirage Hotel and Casino, Nevada, USA, volcanic eruption show. Bookmark the permalink.