Yet again on his incredible journey, Lewis the Lion couldn’t believe his little luck. When he’d seen the prices at the airport of the typical Las Vegas shows, he’d thought that there was no way he’d be able to see one on his backpacker’s budget. However, Helen had got a tip-off that in the morning, some of the tickets that had not been sold, went on sale at heavily discounted rates at certain outlets down The Strip. It was certainly worth having a look to investigate. So, Lewis the Lion and Helen did precisely that!

They were the first in the queue that morning for the office inside Circus Circus Hotel and Helen already knew that she would like to see one of the Cirque du Soleil’s shows, if she could, as for years she had heard how fabulous its theatre productions were. It so happened that Cirque du Soleil had five different shows on in Las Vegas whilst they were there, the biggest of which was their water-spectacular show ‘O’ which was definitely out of their backpackers’ price range with a minimum starting price of $200 per ticket! So, they went for the next best thing; a ticket for ‘The Beatles-Love’ show at the Mirage Hotel which was also meant to be an outstanding show. 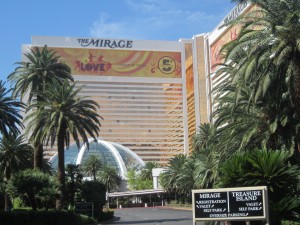 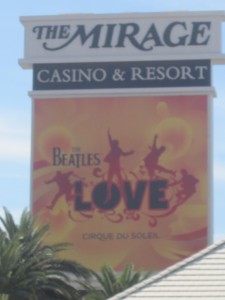 Lewis the Lion therefore read some of the promotional literature he found whilst waiting in line and decided that Helen was right: this show looked like it would be amazing if the costumes and sets in the pictures were anything to judge by. 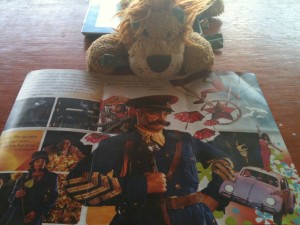 So, Helen went ahead and bought a discounted ticket for which she was given a voucher. The pair then had to head to The Mirage Hotel itself and exchange it for a ticket for that evening’s performance. Lewis the Lion felt very excited once he had the ticket between his little paws: yet again it felt like another one of his dreams was coming true! 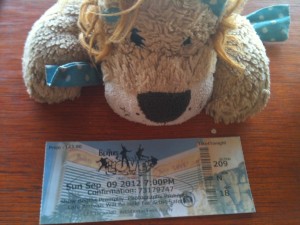 Whilst they were at The Mirage Theatre Booking Office, Lewis the Lion admired the theatre entrance: it looked very ‘groovy’ and ‘retro’ in its array of rainbow colours. 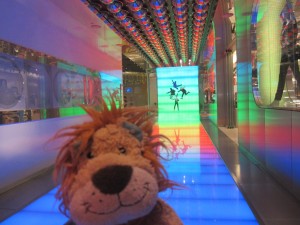 Lewis the Lion thinks the theatre entrance is groovy!

The evening came around quickly and the pair arrived at 6:30 pm to take their seats. Lewis the Lion laughed as the toilets in the theatre were entitled: ‘Lads’ for the Men and ‘Lasses’ for the ‘Ladies.’ It reminded him of Northern England and of course The Beatles came from Liverpool in North-West England.

The awaited performance began in earnest at 7 o’clock that evening on a circular stage, reflecting the notion of a circus’ big-top; after all, they had come to see a ‘Cirque du Soleil’ production, the French for ‘The Circus of the Sun.’

No pictures or filming was allowed during the performance and in a way Lewis the Lion preferred it that way as it meant that he could really relax and enjoy the show…and what a show it was! Lewis the Lion even felt a little tear creep into his eye at one point, he just felt so happy to be here to witness such an impressive performance: it really did feel like a dream come true!

The show involved a cast of over 60 international stars of dancers, acrobats, trapeze artists, skate-boarders, trampolinists and musicians. Not to mention the number of performers who danced through the air above the stage and the audience whilst suspended on wires! The exuberance of light and colour, energy, projections and voice-overs all set against the soundtrack of the Beatles classic music was a truly multi-sensory experience where the audience felt involved. The light projections on the audience itself cleverly turned them into the sea at one point and they were later were covered by a circus tent cloth!

To get a glimpse of what enthralled and mesmerised Lewis the Lion for a couple of hours, click on this link to see the official Cirque du Soleil trailer.

Lewis the Lion cheekily took a photo after the show of the playlist to remind him of what he had seen. Here it is: 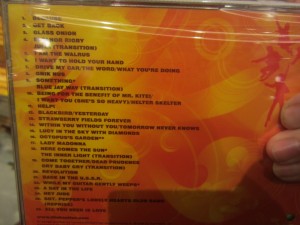 Lewis the Lion checks out the playlist for the show

Parts of the show that he particularly enjoyed were:

* a gum-boot dance to ‘Lady Madonna’ where the actress seemed to have a centipede with lots of Wellington boots behind her! 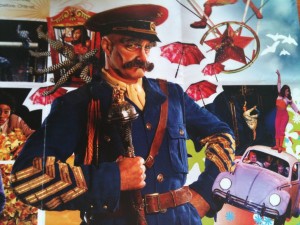 * and last of all, when the whole cast appeared for the finale of ‘Sergeant Pepper’s Lonely Hear Club Band’ with amazing costumes such as an actor walking on trumpets, whilst confetti showered down on the audience below for a truly uplifting ending to the show.

Lewis the Lion felt like he and the rest of the audience were truly buzzing and aglow by the time they streamed out of the Beatles style theatre at the end of the show as you can see in these pictures.

The Beatles style has influenced the design of this theatre 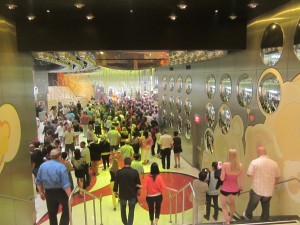 The audience leaves through this retro-styled entrance

Lewis the Lion loves going to the theatre and seeing shows.

If you had the chance to see any show in the world, what would it be and why?

Helen Molloy has been a Primary Learning and Teaching Consultant, leading on the introduction of Primary Languages in the City of Stoke-on-Trent for the past 5 and a half years. She is passionate about language learning and inspiring children into developing a curiosity and awareness of other people's languages and cultures.
View all posts by Helen Molloy →
This entry was posted in Lewis' Blog and tagged Acrobatics, children's travel blog, Cirque du Soleil, dance, educational travel blog for children, Las Vegas, Lewis the Lion, love, music, The Beatles, The Mirage. Bookmark the permalink.