Lewis is saved at the last minute at the Indian Embassy, Bangkok 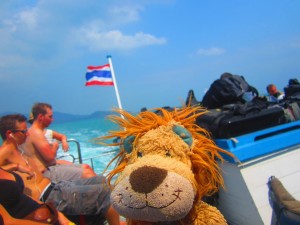 Lewis the Lion catches the ferry back to Koh Samui

Lewis thought that at times there seemed to be angels here on earth. It was strange that sometimes, when he was at the point of his greatest need, just the right person, often a stranger, would appear just at the right time. Never was this so true as on the day that Helen had to collect her visa from the Indian Embassy in Bangkok. Lewis the Lion, Helen and Sinead had arrived back from Koh Samui to hit terrible Friday afternoon traffic. The Embassy office shut at 6pm but you needed to arrive before 5pm to be seen and have in hand a token to say that you had queued. Helen and Lewis the Lion were getting more and more anxious when at 4:30pm they were stuck in the full heart of Bangkok’s rush hour traffic and they weren’t moving anywhere fast: in fact they weren’t moving at all! Whatever would they do if the office had closed and Helen hadn’t collected her passport? 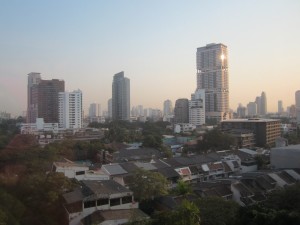 Lewis looks out over the Bangkok skyline

They were due to fly to India the next morning and these public offices were shut on a Saturday! If she couldn’t manage to pick up her passport, it would no doubt trigger a series of stressed phone calls to rearrange a whole load of planned activities for their arrival in New Delhi. Lewis the Lion sat in the back of the taxi and willed it to move.

‘How far away are we?’ Helen questioned anxiously.

‘It’s only on the next corner about a mile down the road,’ replied the taxi driver.

Lewis the Lion wondered if it’d be perhaps better if they were to get out and walk the remainder of the way as it was now 4:57pm! But with all their luggage in the back of the car, maybe that wasn’t such a good idea after all? So, they decided to wait until the taxi eventually reached the Indian Embassy at 5:10pm. Lewis the Lion crossed his fingers while he and Helen ran off into the building, while Sinead waited down below.

They got to the security check-point at the doors to the Embassy offices but the guards shook their heads. If they hadn’t collected a token before 5pm, then they weren’t getting in. Helen started to plead with the security officers explaining that the traffic had come to a standstill. They were immovable. Lewis the Lion and Helen were in a real panic now. What were they to do?

Just at the point when they were about to give up hope, a man who was stood next to them said the security officers, ‘It’s OK. They’re with me.’ as he waved his token number 109 at them. Helen’s jaw dropped open in disbelief. This kind man had saved them by the skin of their teeth.

He introduced himself as Paul and it turned out that he’d been waiting his turn to pick up his passport too but had had to leave the waiting room to take a phone call. When he’d seen Lewis the Lion and Helen clearly panic-stricken at the thought of not being able to pick up her passport, he stepped in to help. Lewis the Lion and Helen both thought that he was very quick-thinking and very kind to offer to help them. It seemed like he was an angel here on earth, coming to save them at the eleventh hour! 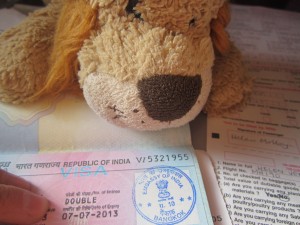 Phew! The Indian visa is picked up in the nick of time.

They then entered into the offices and waited in turn to be seen together with Paul. Lewis the Lion and Helen both beamed with delight as her passport ready-stamped with the Indian visa was handed over to her. From there they thanked Paul profusely and happily made their way to join Sinead again. With passport in hand they were then able to enjoy their last night in Bangkok: a stay in a rather posh hotel in the Sukhumvit area called The Four Wings Hotel. They also dined in a wonderful restaurant called Soul Food before the excitement of the day started to take its toll. It was off to bed for Lewis the Lion as tomorrow he would journey to his last country on his worldwide adventure: India…

Has a stranger ever helped you out in a time of need? What happened and how did it make you feel?