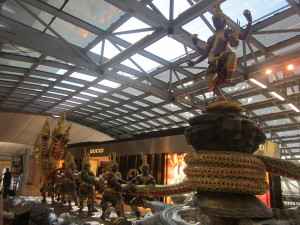 Vishnu and the Scene of the Churning of the Milk Ocean

The next morning, Lewis the Lion, Helen and Sinead were back at Bangkok’s impressive international airport: the Suvarnabhumi aiport. Before Helen went through passport controls, she made sure that she stopped off at the chemist to buy lots of rehydration sachets and diarrhoea tablets as she’d heard that in India if you weren’t careful as a foreigner you could suffer from something called “Delhi-belly” and she certainly didn’t want that. 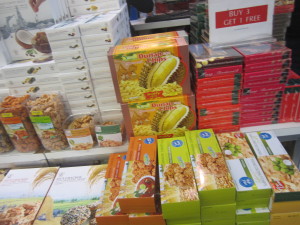 However, she was happy to be leaving behind certain other Asian foods and in particular the Dorian fruit which she spotted a box off inside the airport!

Lewis the Lion and Helen felt quite sad to wave goodbye to Sinead as they went off on their separate ways: Sinead flying back to the UK (where apparently it was thick with snow!) and the travelling friends flying back to Kuala Lumpur in Malaysia before catching a connecting flight to New Delhi, India’s capital city.

Back in Malaysia, Lewis the Lion noticed that the clocks had gone back an hour, which gave Helen some extra time to catch up on some e-mails in the airport lounge. However, Lewis the Lion came across a rather interesting photo in a toilet cubicle: a sign of which he’d never seen before in his life and it made him laugh! 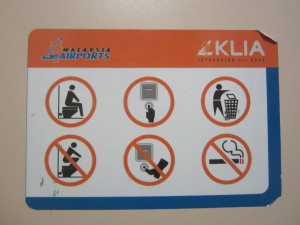 Lewis laughs at these instructions in the toilet cubicle

Can you see the image to the bottom lefthand side of the picture? Well, Lewis the Lion learnt that apparently there is a high case of people breaking toilet seats as they transit through the Malaysian capital. Mainly because in many Asian countries, they do not have toilets they way that we know them in the Western world. Instead they are used to squat toilets so western-style toilets can be quite baffling for them which is why they need to be reminded not to stand on the toilet seat! 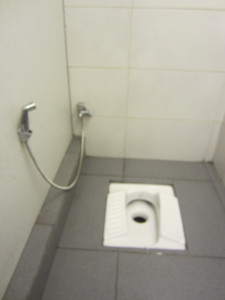 It wasn’t long before Lewis the Lion was boarding his next flight; this time to New Delhi on a huge aeroplane. Helen had been allocated the wrong seat as she’d specifically paid for a window seat and so had to wait until the very end before she and Lewis could be sat down. It was worth the wait though as Lewis just loved looking out of the window as the plane soared high above what looked like a sea of fluffy, cotton wool clouds.

Flying up above the clouds

As had been the case on many of his journeys as he crossed country boundaries, flying to India was no exception, as even with Helen’s Indian visa stamped firmly in her passport, she still needed to complete a landing card to present on her arrival to passport control. 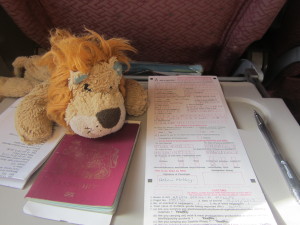 Completing the landing card for arrival in India

On this flight, Lewis the Lion got his first little taster of what was to come over the following weeks as he and Helen tucked into a delicious Indian style meal which included chicken curry, rice and chapatis. 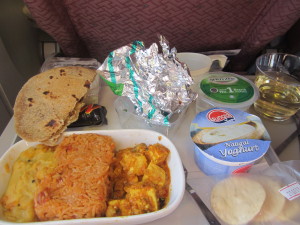 What was intriguing was at the end of the meal, the air-stewards came around with small packets of ‘aftermints.’ Lewis the Lion wondered if they were a bit like “After-Eight” dinner mints but there was no chocolate in sight. 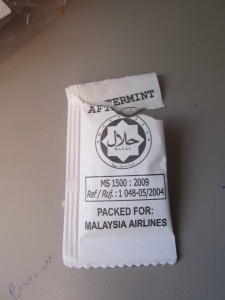 Instead was a packet of various types of sweet seeds that had a minty and aniseed taste to them. A very unusual taste! 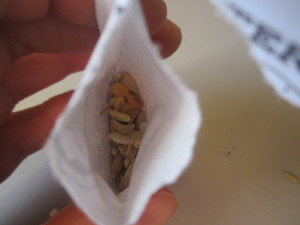 As Lewis the Lion checked his inflight journey screen, he was surprised to see that New Delhi had one of those strange half an hour time zone changes, just like he had experienced when he had been in parts of Australia too. New Delhi was in fact two and a half hours behind Kuala Lumpur time (and seven and a half hours ahead of UK time). What also surprised him was rather like the particularly cold snap that the UK was facing this winter, New Delhi had had freakishly cold weather by their standards for that time of year too. They had never experienced such low temperatures in many years with temperatures in New Delhi hovering around the 12 degrees celsius mark. Helen would have to make sure that she wore warm clothes as it would certainly colder than the 30 degrees plus they had got used to in Thailand! 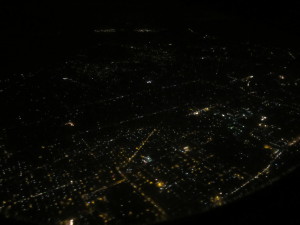 Lewis the Lion arrives in India at nighttime

As in so many times on this extraordinary journey, Lewis felt a wave of excitement as the plane started to descend over New Delhi. It was twilight and the twinkling lights of the city lit up some of the city’s impressive monuments and religious sites as they came into land. Lewis the Lion was both nervous and excited all rolled into one as he landed in India. Of all the countries he had been to on his travels, he was very much aware of the fact that this was perhaps one of the poorest countries that he had visited and so was a little bit nervous about what he might see and experience there. 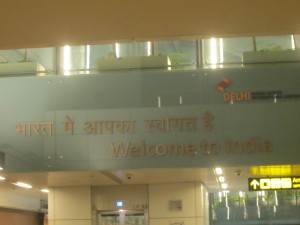 Lewis the Lion is welcomed to India: in Hindi and in English

However, the airport itself was a fine affair and its sign proudly welcomed Lewis the Lion and the other passengers to India in both English and Hindi (India’s two main languages). 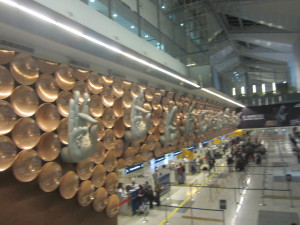 Lewis the Lion started to smile to himself as he waited to come through passport controls. Above his head were huge statues of hands, decorated in henna and holding certain poses used in classical Indian dance. Lewis the Lion wondered if he might get to see some of this style of dancing on his visit to India? Perhaps even in a Bollywood film? 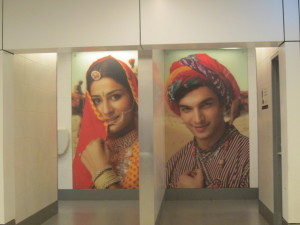 The women’s and the men’s toilets

Straight away, Lewis the Lion started to appreciate the Indian cultural dress in the airport as even the toilets had pictures of traditionally dressed men and women to depict which toilets were which: the men’s or the ladies’!

A taxi driver from the hotel came to pick Helen and Lewis the Lion up and just this once, Lewis the Lion was very grateful to be taking private transport to get to his destination. It was dark and late, the traffic was as he might have expected, chaotic and noisy (but he will tell you more about that in one of his next blogs). It had been a very long day of travel passing through three Asian capital cities but Lewis the Lion was resolutely grateful to have arrived in India safe and well for now.

Lewis the Lion was intrigued to try the Indian after-dinner mints on his flight. What’s the most unusual food that you have ever tried? What was strange about it? Did you enjoy it? Why or why not? How would you encourage other people to try that food too? Design a poster for it.