On the overnight bus to Sydney, Lewis the Lion passed through Newcastle. Funnily enough, like the Newcastle upon Tyne back in the North-East of England, it is famous for its coal mining with some of the largest freight trains in the world. Lewis the Lion wondered if the immigrants back in the 18th century had named it thus because it reminded them of home? Is this where the proverb ‘to carry coals to Newcastle’ came from? In fact he knew that there were lots of Newcastles the world-over. Where was the original one he wondered?

He even found a Newcastle Street when he was in the West Coast in Perth, later on on his journey. 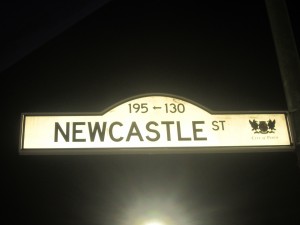 There’s a Newcastle Street in Perth too! 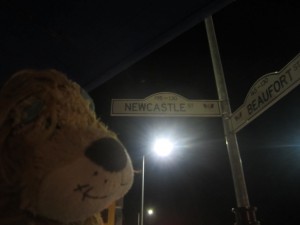 Lewis the Lion finds another ‘Newcastle’ in Perth

In the meantime as the bus took him into Sydney, he also drove up over a very familiar looking bridge. He really did feel at home as for a minute he mistook it for the Tyne Bridge! (He would find out more about the iconic Sydney Harbour Bridge in the coming days that he’ll look forward to telling you about in one of his next blogs). 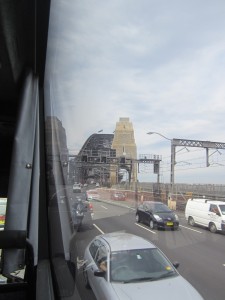 Arriving over the Sydney Harbour Bridge

Can you look on a world-map and find how many places have the name Newcastle?

Or which names of other UK cities or towns are replicated around the world?

Helen Molloy has been a Primary Learning and Teaching Consultant, leading on the introduction of Primary Languages in the City of Stoke-on-Trent for the past 5 and a half years. She is passionate about language learning and inspiring children into developing a curiosity and awareness of other people's languages and cultures.
View all posts by Helen Molloy →
This entry was posted in Lewis' Blog and tagged Australia, children's travel blog, educational travel blog for children, for kids, Lewis the Lion, travel blog, travel blog to inspire kids, travel stories to inspire children, travel writing for children. Bookmark the permalink.