Lewis has a sparkling time in Sydney 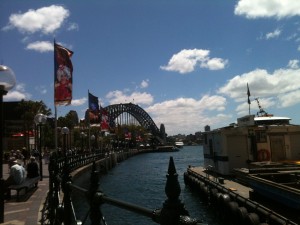 Stepping onto a walkway running along Sydney Harbour was a bit of a ‘wow’ moment for Lewis the Lion. 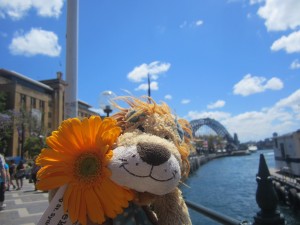 This had to be one of the prettiest harbours he had ever seen in his little life. Under the bright sunshine, he smiled and cherished this fine moment.

Funnily enough, something here reminded Lewis the Lion of home and it wasn’t the gloriously sunny weather. Rather a very special bridge: The Sydney Harbour Bridge which Lewis the Lion thought looked just like the Tyne Bridge in Newcastle upon Tyne, albeit a little bit more elongated. 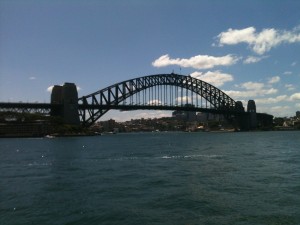 He wanted to discover more about it but you can read more about that in Lewis the Lion’s next blog. 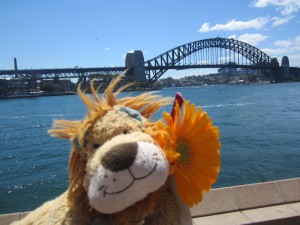 Sydney seems to sparkle in the sunlight

Helen had been handed a special big Margherita on the street and it’s bright colours seemed to match perfectly with the mood of the day as Lewis the Lion and his friends went to experience Sydney’s cafe lifestyle in a place called The Rocks by the Sydney Harbour Bridge. There was a lovely crafts and food market right beside him which he enjoyed looking at later, (he definitely just looked though as everything was quite pricey!). 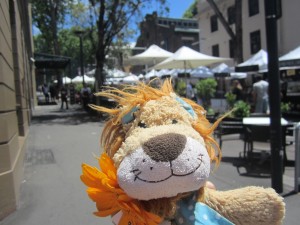 Lewis the Lion enjoys the café lifestyle near The Rocks

Next he and his friends took a little stroll (and enjoyed an ice-cream) alongside Sydney’s other iconic landmark: the Sydney Opera House. 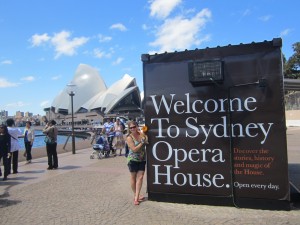 This building has sat proudly on Sydney’s waterfront since 1973 and is the biggest performance space in the world, made up of over a thousand rooms. These include concert halls, rehearsal studios, restaurants and shops. Lewis learnt that its concert hall also has the largest mechanical organ in the world but for now he was admiring the outside. 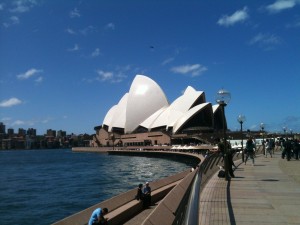 With its the curved white lines, it reminded Lewis of a ship with its sails up. 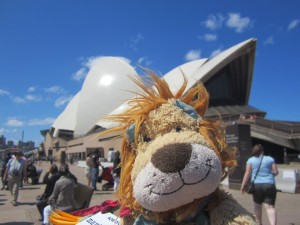 Lewis sees the huge sails of the Opera House behind him

However, as he got closer, the underneath of the V-shape of the sails reminded him of a shark’s mouth open wide and the beams of the underside reminded him of a whale’s ribcage. My goodness, he did have an active imagination! He wondered if the architects themselves had thought of this when they were designing it?

The detail closer up was quite extraordinary, particularly of its large glass windows and its granite tiled roof which Lewis the Lion thought was quite art-deco in style, they way they reflected the light. 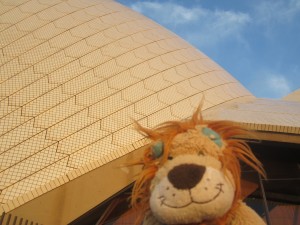 Lewis the Lion wasn’t surprised to learn that over 2 million people a year come here to watch concerts and operas. For him, just being here to see the building felt enough and he could understand why there was a group of school children there that day learning all about it too. 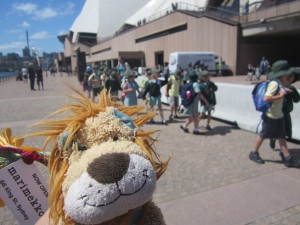 Lewis sees a school trip to the Sydney Opera House

Lewis the Lion and his friends’ walk then took them around the tip of the Sydney Opera House from where they had the most impressive view of the harbour and the Sydney Harbour Bridge. 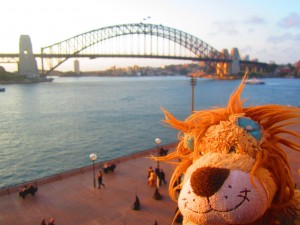 Admiring the iconic bridge at sunset

Lewis could see that they were setting up for what looked like an outdoor wedding and he thought what a wonderful place these people had chosen to enjoy their special day. They certainly would have some very special wedding photos with these iconic landmarks in the background. 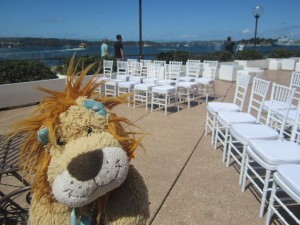 Someone’s getting married with a fabulous view!

The pathway then led him along to the most pleasant and relaxing Botanical Gardens. Lewis the Lion was happy to see another lion statue as he entered the park. 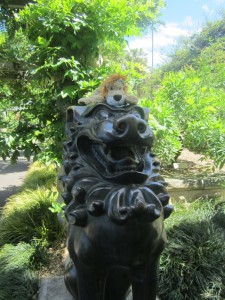 Lewis the Lion greets another lion in Sydney’s Botanical Gardens

He then thought the birds of paradise flowers looked a bit like the long-beaked ibis birds scavenging around the park. 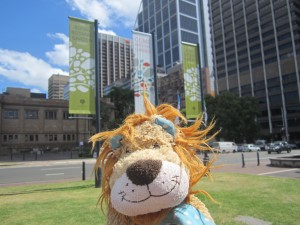 Lewis enjoys a pleasant stroll through the Botanical Gardens

For sure, Sydney certainly sparkled in Lewis the Lion’s eyes, both during the day and night.

The Sydney Harbour Bridge by night

Lewis the Lion wants you to look closely at the photo of the Australian school children. What do you notice is the same as British school children? What is different?

Helen Molloy has been a Primary Learning and Teaching Consultant, leading on the introduction of Primary Languages in the City of Stoke-on-Trent for the past 5 and a half years. She is passionate about language learning and inspiring children into developing a curiosity and awareness of other people's languages and cultures.
View all posts by Helen Molloy →
This entry was posted in Lewis' Blog and tagged Australia, children's travel blog, educational travel blog for children, for kids, Lewis the Lion, Sydney, Sydney Botanical Gardens, Sydney Harbour, Sydney Harbour Bridge, Sydney Opera House, travel blog, travel blog to inspire kids, travel stories to inspire children, travel writing for children. Bookmark the permalink.