The very first ‘American’ food item that Lewis the Lion ate on American soil was a thick, doughy pretzel, whilst he was at the airport in Salt Lake City waiting for his connecting flight to San Francisco. The thing that struck him about this twisted, salted rope of bread was not the fact that it was delicious, which it was, but rather how much of it there was…and that seemed to be the reoccurring theme with him and food whilst he was in the United States. You could always guarantee healthy sized-portions.

Generally, he learnt that the Americans eat really well and there is no shortage of choice. That probably has something to do with the fact that America is a real melting pot of cultures and races and so practically every international cuisine is reflected there. In the UK, people often think of American food as just fast-food with hamburgers, hotdogs, french fries, etc. which it does of course offer (and sometimes they’re quite posh like at the ‘In and Out Burger’ restaurant that Lewis tried!), but in the USA you also find several other international cuisine fast-food outlets, such as Chinese, Mexican, Italian and Japanese.

However, what he loved about the fast-food restaurants in America was that once you had purchased your soft drink (called ‘sodas’ in America), usually you got any refill for free: you just had to help yourself. That was particularly useful when some restaurants also offered free wifi as you could make that drink last for a very long time!

As Lewis the Lion spent most of his time on the West Coast of America, he discovered that the Latin American influence on food is very strong and he tried eating out in two popular American-Mexican style restaurants: Taco Bell and Chipotle. At the latter, he somehow managed to eat a burrito that was practically the same size as himself! Helen’s eyes nearly popped out of her head when she saw him devour it as she could barely even hold one but needed to eat it delicately, in stages! Inside this delectable flour tortilla burrito was: a choice of meat, white or brown rice, black beans or refried beans, tomato, onion, hot sauce, guacamole (a type of avocado paste), lettuce and to top it off, sour cream. It was no wonder then that the pair did not need any dinner later on that day! (Check out the photo below).

Whilst in California, many people had told him that he ‘must’ try a fish taco. He only managed to get around to it just as he was about to fly out of America, whilst at LAX airport. He thought it was tasty but it reminded him of a posh fish-finger sandwich if he was honest and couldn’t see what all the fuss was about!

However, he discovered that the West Coast of America is indeed famous for its fish. He enjoyed good fish in San Francisco, Monterey and Malibu. In particular he developed a real taste for a traditional American dish called clam chowder (a type of creamy soup with clams) which is served in a hollowed out sour-dough roll in San Francisco. It’s also famous for its crab and lobster and Lewis the Lion discovered lots of seafood restaurants down on Fisherman’s Wharf.

Again whilst in San Francisco, he was told that he ‘must’ try some foods: bagels for breakfast, garlic fries (chips smothered in garlic butter) at the baseball and a Ghirardelli ice-cream. He discovered that the brand Ghirardelli also sold chocolate and had their own square named after them that was always full of big queues of people lining up for one of their scrumptious ice-creams.

Salt-water taffy was a sweet that he tried on the Santa Cruz Beach Boardwalk, another recommended food to try. They certainly were very chewy but very flavoursome.

However Lewis the Lion discovered that in some of the hostels he stayed at, he developed a real penchant for a classic American breakfast: fresh waffles (that you made yourself) with maple syrup. At other hostels, even if they were serving bacon, eggs, sausages, it usually came accompanied with maple syrup too.That was a guaranteed way to kick-start your day!

On the healthy side, Lewis the Lion just loved the fact that fruit and vegetables were also in plentiful supply wherever he went and especially in California, Lewis the Lion saw more types of dried fruits and nuts than he had ever seen in his life. He discovered that he particularly enjoyed something called a ‘Trail Mix’ which was a mixture of nuts, dried fruit and chocolate pieces: a great energy snack food.

Below are some of the photos that Lewis the Lion took of himself enjoying a lot of delicious American food! 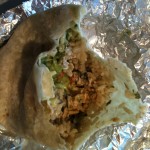 The burrito is packed with all sorts of things 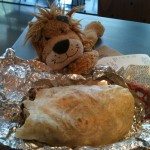 Lewis the Lion eats the biggest burrito of his life! 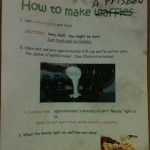 Instructions for how to make a waffle in English 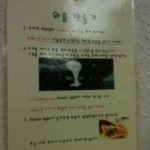 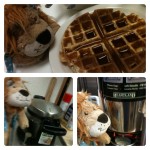 Lewis the Lion makes his first waffle for breakfast 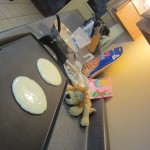 Lewis the Lion has more fresh pancakes in a different hostel 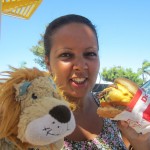 What huge burgers there are in America! 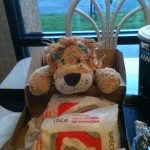 Lewis the Lion is introduced to American Mexican tacos and burritos 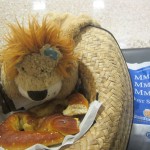 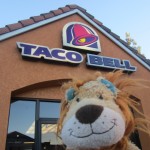 Lewis tries out some American tacos 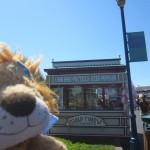 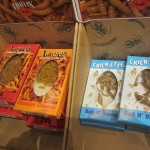 Worms and crickets for lunch?! 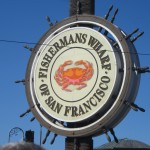 Fisherman’s Wharf is famous for its seafood 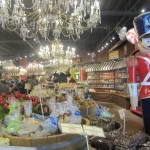 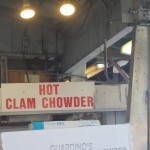 Clam Chowder is a famous dish in San Francisco 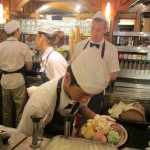 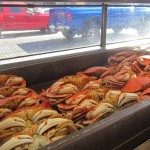 Crab for lunch anyone? 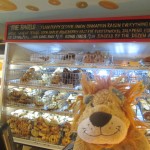 Lewis the Lion in a traditional bagel shop 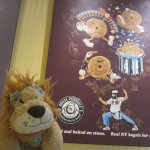 Lewis the Lion laughs at the funny bagel poster 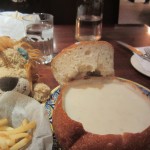 Lewis the Lion with sourdough bread and clam chowder 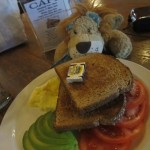 Lewis the Lion and a Californian breakfast 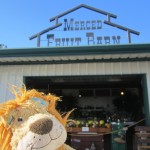 Lewis at a traditional Californian fruit and nut farm 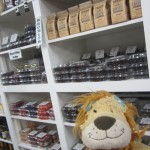 Lewis amidst Californian fruits and nuts 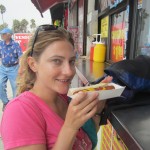 Helen has a traditional American hotdog 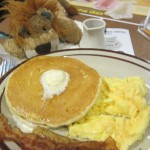 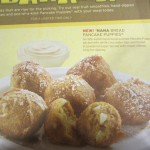 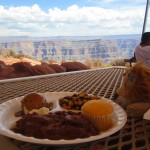 Lewis enjoys a hearty lunch at the Grand Canyon 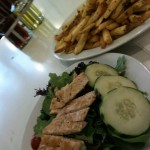 In and Out Burger – a popular West Coast Take Away Restaurant 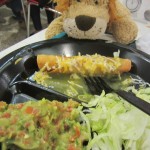 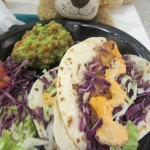 If you were going to America, what foods would you like to try for the first time? Why?

Helen Molloy has been a Primary Learning and Teaching Consultant, leading on the introduction of Primary Languages in the City of Stoke-on-Trent for the past 5 and a half years. She is passionate about language learning and inspiring children into developing a curiosity and awareness of other people's languages and cultures.
View all posts by Helen Molloy →
This entry was posted in Lewis' Blog and tagged American food and drink, bagels, burgers, children's travel blog, educational travel blog for children, fast food, French fries, hotdogs, Lewis the Lion, Sodas. Bookmark the permalink.