Lewis the Lion couldn’t quite believe it: he had come to the end of his American adventure and it was now time to begin his Australasia adventure instead. He felt quite sad to be honest as he’d just had the time of his life here in the Americas since his adventure first started in Brazil back in February. The only problem was that he had to get there. Even though he had now been travelling for 7 months now, he still secretly wished that someone would invent a teleporter, like in the Sci-Fi movies and that he could magically rub his little paws together and ‘bam’ he’d be in the new location he desired without having to do the journey! No more so than now with the prospect of having to cross the Pacific Ocean. He knew that he shouldn’t grumble really as he contemplated those first explorers who set off in boats to circumnavigate the globe: now that would have been a journey! 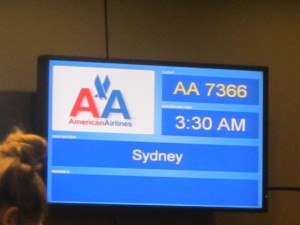 A change of flights: via Sydney!

When he arrived at the airport expecting to find his flight that evening to Auckland, New Zealand, he was told that his flight had been cancelled and that he’d be routed through Sydney, Australia instead. For his trouble, he was given a $20 voucher by the airline so that he could get some dinner. That definitely made him feel better about the inconvenience even if he had to somehow stay awake till 4 o’clock in the morning before his flight to Sydney was ready to take off. He couldn’t wait to get on that flight now and get to beddy-byes! 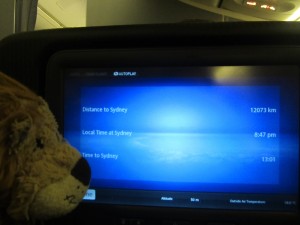 Lewis the Lion has a long flight ahead of him

When he eventually took his seat with Helen they were issued with pillows and blankets and the shutters were pulled down. Before he went to sleep though, he checked on the monitor in front of his seat about how far he had to go. It was a very long flight indeed as he would be crossing over the Pacific Ocean, the largest ocean in the world. It was over 12,000 kilometres to get there and would take approximately 13 hours! 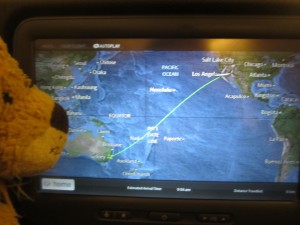 Lewis the Lion found that it was helpful that on the monitor in front of him, he could see the flight-path of his journey. That gave a precise location of where the aeroplane was at any given moment. The flight-path traced the journey that he would be making from Los Angeles, America to Sydney, Australia. 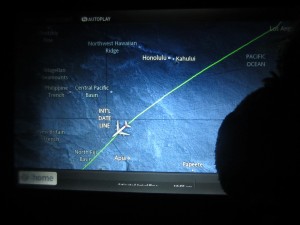 In no time at all, Lewis the Lion was fast asleep and it was probably just as well with such a long flight. He didn’t even wake up for dinner which was being served at 5 o’clock in the morning. He asked Helen why they did that when they knew that most people were asleep? She explained that it was to try to get people used to the new time zone that they would be travelling into. As it was, something very peculiar was going to happen to Lewis the Lion that night: he was about to lose a day of his life (or at least a lot of hours) because he was going to cross the International Date Line! When it is 12 o’clock midday in Los Angeles, it is 7 o’clock in the morning, the next day in Sydney, Australia! In other words, a whole 19 hours ahead! Lewis the Lion’s mind boggled at the thought! It was very tricky to get his head around this. But it all made perfect sense really. It was just to do with the fact that each day the earth rotates and half of it is in daylight whilst the other half has night. However, Helen confessed that having a world clock on her phone certainly helped and that she entered all the pertinent places to help her keep track and especially today, the clock would show Los Angeles, Sydney and London. 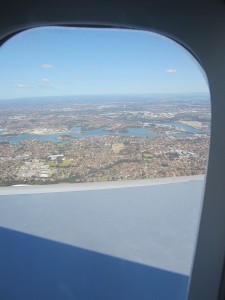 Lewis the Lion gets his first view of Sydney

At approximately 10:30 am the next morning, the plane touched down in Sydney. Lewis the Lion was quite excited. This had been an unusual turn of events and if you like, it gave him a sneak preview of what was to come when he’d be travelling back to Australia in a month’s time. Sydney certainly looked impressive from the sky at any rate. 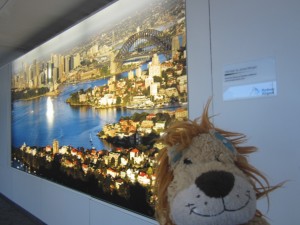 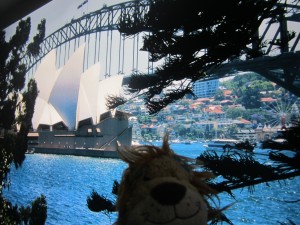 Whilst in the terminal building, he quickly posed by some posters showing the famous Sydney Harbour before rushing through the airport to catch his connecting flight to Auckland, New Zealand. 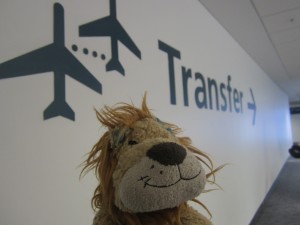 As he hot-footed it with Helen to the departure gate, he wondered if their luggage would also make it onto the flight as there was not much time at all between the transfers? 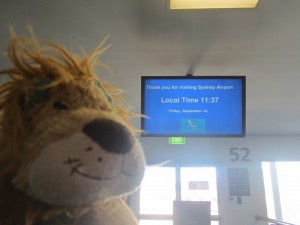 Lewis the Lion just couldn’t believe that he’d be getting on another flight so soon after his 13-hour flight and there was another 3-hour flight to go! 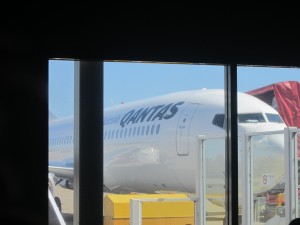 The Qantas Aircraft is ready for boarding to Auckland, New Zealand 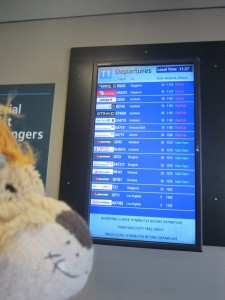 Lewis the Lion checks out the airport’s departure board

He managed to check the departure board one last time to check that he was in the right place as it really had been a bit of a race against the clock to catch this next flight in time. 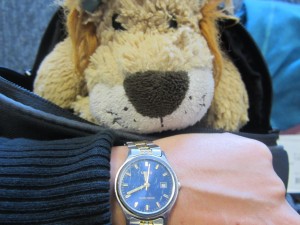 Lewis the Lion has lost a day!

Whilst Lewis the Lion and Helen were sat there, she made a deliberate point of turning the handles on her old-fashioned wrist-watch forward by 19 hours! It seemed incredible that it was only twenty to twelve in the morning in Australia! This time difference was going to take some getting used to, that’s for sure. She told Lewis the Lion that the best course of action when they got to New Zealand was to probably try to stay awake for as long as possible into the evening, say till 9 or 10 o’clock at night and then try to sleep the night through to try to adjust their body clocks.

When the pair eventually arrived in New Zealand, after another 3-hour flight, they had to move their watches forward again by 2 hours. My goodness what a funny old time they were having!

At Auckland airport, rather like the time they were in Chile in South America, they had to fill in a quarantine declaration saying that they weren’t bringing any fruits or vegetables into the country and put their bags through the scanner…or at least they would have done, if they had had all of their bags but as Lewis the Lion had suspected, the change-over time between the flights had just not been long enough and Helen’s luggage had not arrived on the flight in time! Oh dear! Helen however remained rather relaxed about the affair seeing as the carrier provided her with some free pyjamas and toiletries and promised her that they would deliver her rucksack to her hostel the next day. Seeing as this seemed to be the worse that had happened to her and Lewis the Lion in 7 months of travel, she couldn’t complain really.

As Lewis the Lion, the travelling lion, drifted off into a very deep sleep that evening after such a long day (or days!) of travelling, he first contemplated these thoughts on what it means to be a traveller. 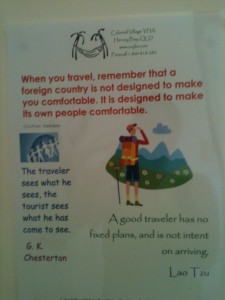 Lewis the Lion contemplates what it means to be a traveller

Lewis the Lion thinks that he dreamt of a teleporting machine that night.

If you had a teleporter where would you like it to take you to in an instant?

Helen Molloy has been a Primary Learning and Teaching Consultant, leading on the introduction of Primary Languages in the City of Stoke-on-Trent for the past 5 and a half years. She is passionate about language learning and inspiring children into developing a curiosity and awareness of other people's languages and cultures.
View all posts by Helen Molloy →
This entry was posted in Lewis' Blog and tagged America, Americas, Australasia, Australia, children's travel blog, educational travel blog for children, International Date Line, Lewis the Lion, New Zealand, Pacific Ocean. Bookmark the permalink.