Lewis the Lion talks about toilets in South America

Lewis the Lion had travelled in seven of the countries in South America (including some Pacific Islands) in 6 months and realised that there was one thing that a lot of them had in common: the toilets! Or ‘ los baños‘ as they are called in Latin-America (and not ‘aseos‘ as in Spain).

Lewis the Lion realised that it must be tricky for those foreign guests to remember this as often signs are up in the toilets reminding them not to put anything else down the toilet!

The other thing that Lewis the Lion noticed that was different is that often public toilets have the toilet paper roll outside the toilet cubicles themselves and you need to remember to collect your paper before spending a penny!

The other difference in some of the poorer countries in South America is that toilets often don’t have seats and don’t flush either! Instead there is often a big bucket of water near the toilet with a smaller container which you use to scoop out some water and then pour it in the toilet pan after you have used it.

When Lewis the Lion was in Peru, he discovered that what the locals called was the ‘Inca toilet’ wasn’t a toilet at all: it was simply when nature called and you had to hide behind a tree in the jungle or countryside! Lewis the Lion thought that that was really funny!

Of course in every case, it’s important to wash your hands thoroughly after going to the toilet no matter what it is like! Did you know that a lot of germs and infections can be passed on when people don’t wash their hands properly? So, it was a good job that Helen always carried some hand disinfectant spray with her. 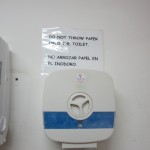 Signs remind people about not flushing paper down the toilet 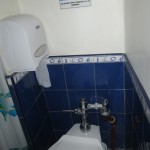 A typical toilet in South America 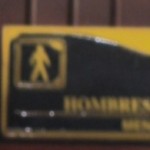 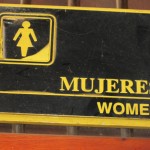 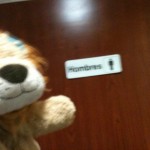 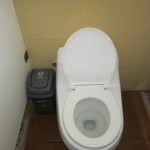 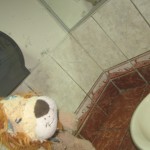 Remember to collect your paper before going to the toilet!

What’s the strangest toilet or bathroom that you have ever used?

Helen Molloy has been a Primary Learning and Teaching Consultant, leading on the introduction of Primary Languages in the City of Stoke-on-Trent for the past 5 and a half years. She is passionate about language learning and inspiring children into developing a curiosity and awareness of other people's languages and cultures.
View all posts by Helen Molloy →
This entry was posted in Lewis' Blog and tagged bathroom, children's travel blog, educational travel blog for children, for kids, Lewis the Lion, South America, toilets, travel blog, travel blog to inspire kids, travel stories to inspire children, travel writing for children. Bookmark the permalink.