India’s street life gets under Lewis the Lion’s skin!

From the moment that Lewis the Lion had arrived in India, he knew that the streets were simply crazy…but he loved it! The place was just so alive and he found that it just got under his skin! There was so much to evoke the senses: the sights, the noise, the smells. After he’d visited the silk weavers of Varanasi, he had another first as he took a cycle rickshaw to near the ghats of the River Ganga – a holy river for many millions of Hindus. The ride was bumpy but offered a fantastic vantage point for observing the street life around him.

As he soaked up the atmosphere, he observed musicians dressed in traditional costumes, silk shops, makeshift markets trading from the pavements and in with the confusion of the traffic, bulls and cows also sauntered along, at ease with the manic world around them!

Just before he arrived by the banks of the River Ganga, yet again Lewis the Lion couldn’t believe his luck as he was there to see a part of traditional Indian wedding with the groom dressed in all his finery. What a lucky lion! 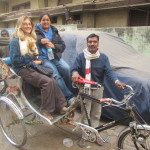 Lewis the Lion, Helen and Seetal take their first rickshaw ride in India 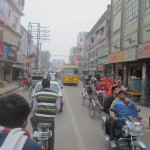 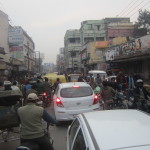 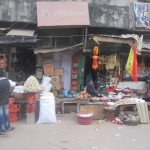 Traditional Varanasi shops by the roadside 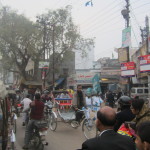 The city is a hive of life and activity 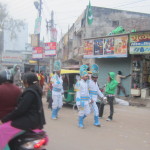 Musicians make their way down the street 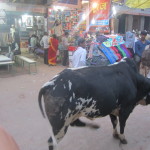 Cows are seen commonly on the Indian streets 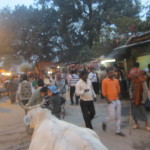 Animals and man walk side by side 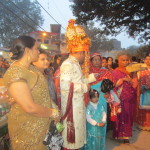 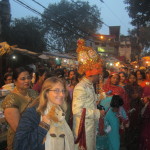 Lewis the Lion and the Indian wedding

When he went home later that evening, the streets were not in the least bit any calmer. In his tuk-tuk, he veered headlong into the oncoming traffic but then did traffic lanes even exist in India he wondered? As usual, the tuk-tuk seemed to miss the oncoming car by a hair’s breath. For sure, Lewis the Lion’s heart was in his mouth on many occasions as he travelled through the Indian towns, villages and cities.

How do you make sure that you are safe in busy traffic as a passenger?