When Lewis the Lion’s hair-raising rickshaw ride had come to an end, the G-Adventures group then headed down towards the ghats (the riverside steps) of the River Ganga. Varanasi is one of the holiest cities in India for Hindus as the River Ganga is seen as a holy river. Many people go to Varanasi to die in the last phase of their life as it’s seen as being very auspicious as it can lead to good Karma in the next life. (Hindus believe in reincarnation and depending on how well you have lived your life, will depend on what your next life cycle will be).

At the top of one of the ghats was a lady selling ready prepared tea-light candle trays that had carnations around them. Dushyant bought some for the group, the idea being that you release them when you are out in a boat on the River Ganga and as you do, you make a wish. Lewis the Lion thought it was perhaps in the same way that people make a wish when you blow out the candles on a cake when it’s your birthday!

The group then boarded a long rowing boat and were carried out across the sacred river. It was twilight as they rowed away from the water’s edge and they could see many hundreds of boats like theirs. It was a beautiful scene as the lights on the ghats seemed to peek into life. Peculiarly, in spite of there being so many people and boats out, the place was strangely serene. From the craziness of the city, the calmness out on the river was a surprising contrast. There seemed to be a deep sense of reverence in the air. From the water, Lewis the Lion could see some burning funeral pyres on the crematorium ghats. Strangely, there was no smell – it was as if it just disappeared into thin air. Varanasi certainly seemed to have an aura of the spiritual and mystic about it!

When the boat was a sufficient distance from the shore, Dushyant then lit the special tea-lights. When all the group had their lit candles in hand, they made a wish and let them go over the side of the boat. Helen and Lewis the Lion had two. The first went into the water no problem but they were bumped as they were about to let go of the second and it promptly went into the water upside down! Lewis the Lion wondered if he had perhaps made the wrong wish?! 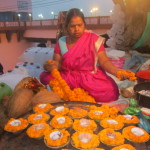 A candle-flower seller on the ghats of Varanasi 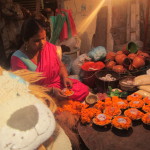 Lewis buys his candles and flowers 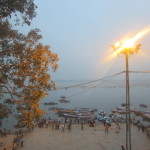 Looking onto the River Ganga for the first time 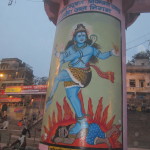 Lord Shiva – the Creator and Destroyer 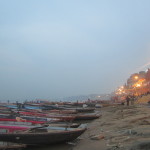 Twilight approaches on the banks of the Ganga 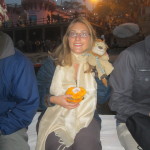 Lewis and Helen prepare for the sunset candle flower ceremony 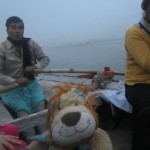 Rowing out onto the River Ganga 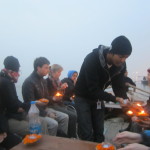 Dushyant lights the candles for his group 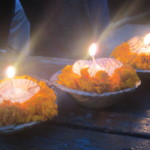 Candles and flowers – an offering to the Holy River 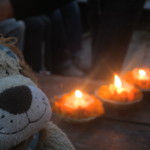 Lewis sees the candles about to be placed overboard 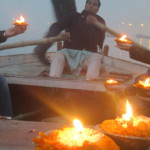 Rowing out for the ceremony 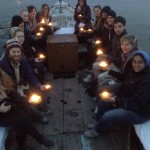 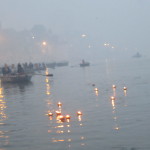 The candles and flowers float peacefully down the Ganga 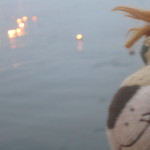 Lewis smiles as he makes his wish! 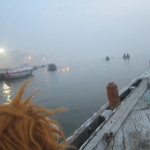 The lights drift off down the Ganga 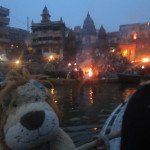 Lewis watches some traditional Indian funeral pyres on the ghats of the River Ganga. 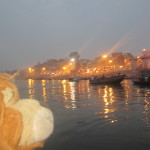 Lewis is mesmorised by the scene – Varanasi, the River Ganga 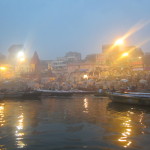 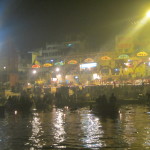 Hypnotic music and lights on the banks of the River Ganga 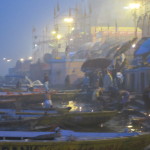 Back in time for the prayer service 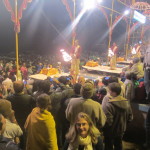 After they watched the candles and flowers slowly drift off up the river, the group were then rowed back to the shore in time to see the Hindu evening prayer. One of the ghats this time was being used for the religious ceremony and it was filled with people, with monks carrying lights, incense rising and bells chiming. It really was quite hypnotic! One child came around and offered sweets and placed a rather huge bindi on Helen’s head. Lewis the Lion laughed as he thought this bindi had got a little out of hand and it made Helen look as if she’d had a gunshot wound to the head! 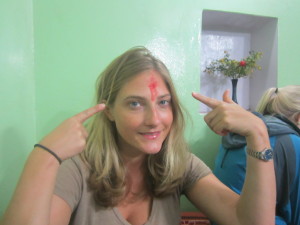 If you could visit Varanasi and take part in the candle-flower ceremony, what special wish would you make and why?

Helen Molloy has been a Primary Learning and Teaching Consultant, leading on the introduction of Primary Languages in the City of Stoke-on-Trent for the past 5 and a half years. She is passionate about language learning and inspiring children into developing a curiosity and awareness of other people's languages and cultures.
View all posts by Helen Molloy →
This entry was posted in Lewis' Blog and tagged children's travel blog, educational travel blog for children, for kids, ghats, Hindu, Holy River, India, Lewis the Lion, prayer, pyre, reincarnation, River Ganga, spiritual, sunset candle flower ceremony, travel blog, travel blog to inspire kids, travel stories to inspire children, travel writing for children, Varanasi. Bookmark the permalink.