Lewis’ first impressions on his first day in India

Lewis the Lion took an instant shine to India the moment he arrived: it was just so alive and bustling, like a beating heart with blood pulsating through its veins. He’d noticed it right from that first drive in the taxi from New Delhi airport. Here, noise seemed to be positively encouraged as horns on the roads weren’t used sparingly, when and as needed, but rather all the time when overtaking, emitting a constant drone. In fact emblazoned on the back of many of brightly coloured trucks and lorries that he saw, were the words, ‘Horn please!’ or ‘Blow horn!’ 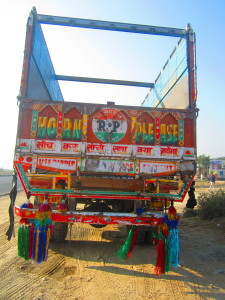 That first morning, feeling a little bewildered, perhaps even a little nervous at meeting a new group of people in the hotel lobby, he quickly realised that he had nothing to worry about: he was in safe hands. For he was greeted by their tall and elegant group leader, Dushyant, who presented him with a garland of yellow and orange carnations. What a warm and friendly welcome! 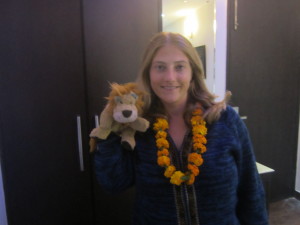 A warm welcome to India

Dushyant bowed slightly and said the word ‘Namasté,’ the Hindi word for ‘Hello.’ However, Lewis the Lion discovered that it meant a bit more than just hello. More specifically it meant ‘the spirit within me, greets the spirit that is within you.’ Lewis just loved the idea that we are all connected to each other and that the divine lives within each and every one of us. 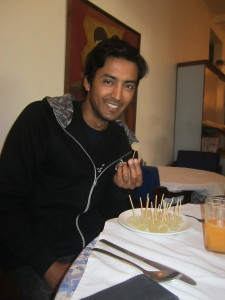 Lewis the Lion quickly made friends with his new group of fellow travellers. He and Helen were sharing a room with another English girl, Seetal (but who was of Indian origins – with a surname like Gandi, there was no mistaking it!). Then like so many other times on his journey, he found himself with people from all over the world: America, Norway, Switzerland, England and New Zealand. Including Dushyant and Lewis the Lion, there were 16 of them altogether. What a wonderful adventure this would be as they would be spending the next 15 days together on a trip called Essential India. This would take in places like the Old Delhi Spice markets, the Taj Mahal, Jaipur Fort and the River Ganges. Whatever was likely to happen in the next few weeks here in India, Dushyant’s words rang out in Lewis’ the Lion’s mind: “Be prepared for the unexpected!”

Before the group left to go anywhere, Dushyant, a Hindu, would get them to repeat the phrase: ‘Om Namaha Shivaya’ – a prayer to the god Shiva to ward off any harm for the day’s adventure. (Lewis the Lion will tell you more about the main religions of India in one of his next blogs).

Naturally, the noisiness and the hustle and bustle outside made Lewis the Lion feel a little bit on edge as they left the safe confines of the hotel. He felt that he would have to keep his wits about him today. However, he felt that with Dushyant leading the way, a native Indian with a love and a superb knowledge of India, as long as he followed what he said then he would be fine. For now for instance, there would be no eating any street food! Dushyant had warned them that whilst being an Indian you might have a higher immunity to some of the bugs in the food, as a foreigner it was best to avoid certain places if you wanted to avoid being ill for the duration of your trip and not to get the infamous ‘Delhi-Belly!’ Dushyant promised the group therefore that he would only take them to safe and clean places to eat along their way. 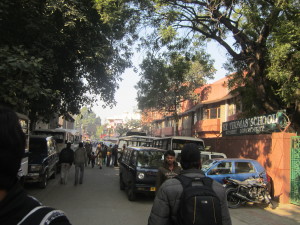 Walking on the roads is better than the pavements!

Stepping out on to the street, the traffic seemed to be a free for all. Even though there were traffic lanes, people seemed to pay no heed to them and Lewis the Lion found that he needed to keep a constant 360 degrees perspective whenever he crossed the roads. There just seemed to be a throng of everything: from heavily laden bicycles, to tuk-tuks, from cars to motorbikes, from rickshaws to cows. 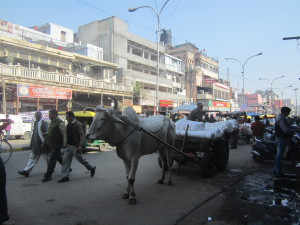 Cows can commonly be seen on the roads 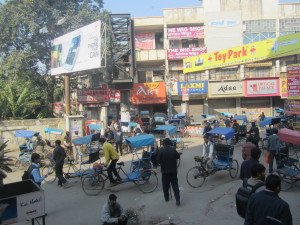 Rickshaws fight for space on the busy roads

The noise of beeping flooded the streets all day long. Often the pavements were so badly maintained that people would also prefer to walk on the road to add to the mêlée. What was utterly amazing was that there weren’t more accidents: cars frequently seemed to miss each other by a whisker. Lewis the Lion held his breath a few times whilst sat in the back of a Delhi yellow and green tuk-tuk, that’s for sure! 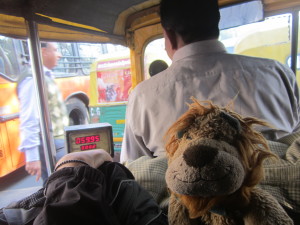 New Delhi is a huge, sprawling city with approximately 22 million inhabitants (almost 3 times the amount of people living in London!). Lewis the Lion learnt that there are 1.237 billion people living in India so naturally it is densely populated and you’re bound to be caught up in the constant buzz of activity. (It is the second most populous country in the world after China). He felt that this energy out on the streets was almost tangible. Sadly though, Lewis the Lion also learnt that 70% of the population in India live beneath the poverty line. In other words approximately 875 million people live in poverty! His little mind found it difficult to comprehend such a huge number or to understand how this was even possible in this day and age when he had already seen such wealth in the world? 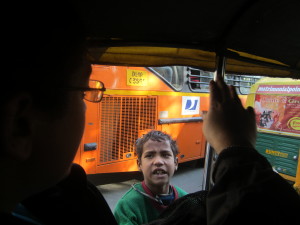 A child begs as the tuk-tuk stops

Is it any wonder therefore that Lewis the Lion encountered people begging on the streets and in particular children? He wondered why they weren’t at school during the day. He discovered that whilst education is offered to all Indians, it is not compulsory and so many children do not attend. Schools provide uniforms, equipment and even a free lunch to attract children to them. For a lion who loved to learn, Lewis the Lion thought that this was heart-breaking. He knew that a good education is your passport to life, after all.

Regardless, Dushyant told his tour group not to give to beggars, an idea which did not sit comfortably with Lewis the Lion whose natural instinct was to help others less fortunate around him. Dushyant told the tourists that India was a country on the point of transition: its economy was now booming and that the Indian government no longer wanted to receive foreign subsidies to maintain it. India was self-sufficient in 2013 and was capable of providing free food, health care and education for all. Dushyant was insistent that there was no longer the need for begging on the streets of India and that by giving money to the beggars, you were just perpetuating the cycle of dependency.

One thing that Lewis the Lion did notice though, apart from the weather not being as warm as he had anticipated (It was only a mere 12 degrees when he arrived in New Delhi – quite a change from the mid-30s plus he’d encountered in Thailand!) was the fact that people dressed much more conservatively. Shoulders and knees had to be covered at all times. (Helen made a point of picking up some additional silk scarves ready to cover her head and shoulders. She was grateful for them against the Indian winter too!). He also noticed that the men in particular seemed to huddle together more. Men holding hands on the streets here seemed to be very normal in India. 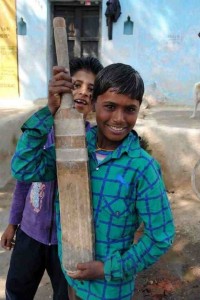 The other thing that excited Lewis the Lion as he had landed in India was that he’d arrived when the English cricket team were on a tour of India. The Indians just seemed to go crazy for cricket; that’s because it’s their national sport with millions upon millions of fans. Lewis the Lion wondered if he’d get a chance to experience a game himself during his trip? He hoped so!

Of some of the things that Lewis the Lion experienced on his first day in India, what interests you the most and why?

Helen Molloy has been a Primary Learning and Teaching Consultant, leading on the introduction of Primary Languages in the City of Stoke-on-Trent for the past 5 and a half years. She is passionate about language learning and inspiring children into developing a curiosity and awareness of other people's languages and cultures.
View all posts by Helen Molloy →
This entry was posted in Lewis' Blog and tagged children's travel blog, cricket, educational travel blog for children, for kids, India, Lewis the Lion, namaste, New Delhi, religion, traffic, travel blog, travel blog to inspire kids, travel stories to inspire children, travel writing for children. Bookmark the permalink.