For all Tana Toraja was one of the most visited tourist destinations in South Sulawesi, it really didn’t appear to have any sort of infrastructure for tourists to travel around it. Lewis the Lion felt a little bit disappointed after making all of the effort to get there. However, he was still in luck as later that evening, a chance meeting with a waitress in a restaurant, quickly blossomed into a friendship and she happily suggested that she take Lewis the Lion and his friends around her city the next day. What luck indeed! Lewis the Lion felt that Imelda was like a guardian angel coming to his rescue. Not only did she help the friends sort out bus tickets back to Makassar for the following evening which they got at a much cheaper rate but she and her family kindly gave up their time to show them around their unique, mountain town. 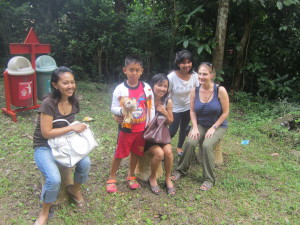 It turned out that Imelda wasn’t just a waitress working in her sister’s cafe but she too was part of a royal family who owned paddy fields and many Tongkonans up in the mountains. 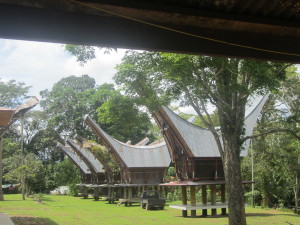 Looking out at the grain houses at Imelda’s

She welcomed Lewis, Helen and Marion into her family with open arms and a good sense of humour. 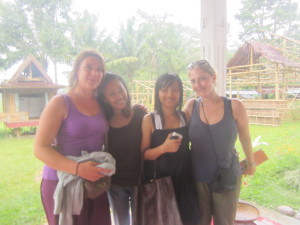 What a lucky chance meeting!

Imelda, her sister, brother-in-law and nephew all took the guests to a very special Torajan burial ground called Suaya, 11 kilometres to the east of Makale in the district of Sangalla’.

Usually tourists would have to pay to visit such a site but seeing as Imelda is a descendant of the nobleman Puang Tamboro Langi’, Lewis the Lion and his friends were simply greeted by the guard on duty and allowed to waltz past the gatehouse for free, up a path towards the extraordinary cliff-face. 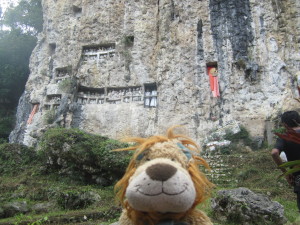 In fact if Lewis the Lion had seen the finale of the funeral ceremony of the deceased lady in Lonnó, he would have been brought to such a place as traditionally, the Torajans are buried in caves high up in the cliff-face. From the time of their death to the time of the funeral festival, a cave is hollowed out of the cliff in which the wooden-carved coffin is placed. To mark the spot of the burial, an effigy (a doll of the person called a ‘tautau’ in Indonesian) stands outside the entrance to the cave. If he were honest, Lewis the Lion thought these effigies looked a bit creepy glaring at him from the cliff face, even if they were those of the kings of Sangalla’! 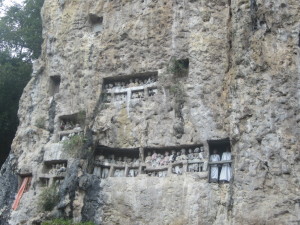 To try to get a closer look, Lewis the Lion started to climb some rather precarious stone-steps up the side of the hillside. The steps were narrow and slippy and so after climbing so far, he decided not to go all the way to the top as he already had quite a splendid view looking onto the parish church of Suaya. 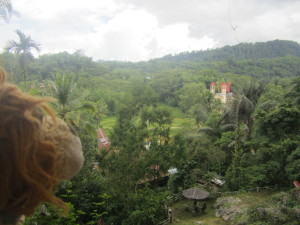 Lewis the Lion sees the Parish Church of Suaya from above

At the base of the cliff face were discarded coffin carriers in the Torajan style and inside a glassed shrine, Lewis the Lion could even spot a skull and a stray dog which had taken shelter there! 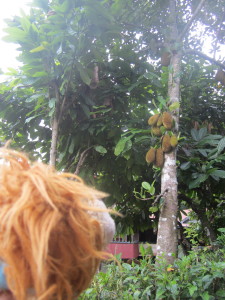 Lewis the Lion spots some jack-fruits

He was surprised to see some jack-fruits as he was leaving the site as the last time he had seen them growing in the wild was in Rio de Janeiro in Brazil. He then remembered that it perhaps wasn’t so surprising after all, as here in Indonesia, there was a very similar warm, tropical climate. 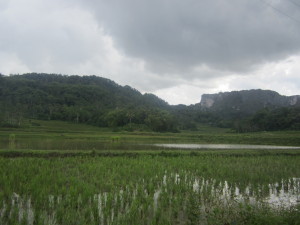 The rain swoops over the paddy fields

Back in the car in the nick of time, he gazed out of the window to see tropical rains sweeping in over the rice paddy fields. He learnt that Indonesia is indeed one of the world’s biggest producers of rice. 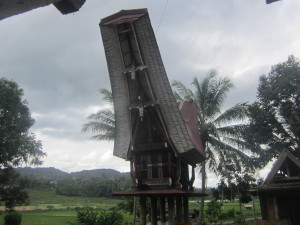 Lewis the Lion felt extremely lucky and grateful to have met Imelda and her family as he was then welcomed for an impromptu lunch at her aunt and uncle’s house. 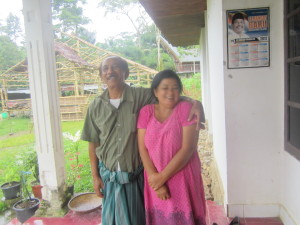 He marvelled at the way these people were so accomodating and friendly to strangers and yet again, he only hoped that one day he would be able to return the favour to these kind people.

Before he knew it, it was time for him, Helen and Marion to set off on their next adventure: this time, heading back through the capital of Sulawesi, Makassar on their way to the tourist town of Pantai Bira. 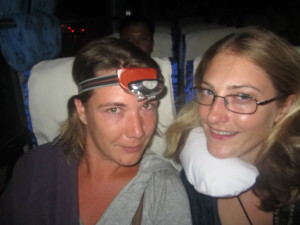 A long bus journey ride back to Makassar

Their overnight bus ride was definitely a bit of a surprise as their seats were already taken by a man who had a monkey in a box at his feet which meant that they had to sit somewhere else! Helen also had to ask the passengers not to smoke on the bus who were sitting close to them. Lewis the Lion was surprised how many people seemed to smoke here in Indonesia: it seemed that all the adults did so and he wondered why when he knew that smoking was so bad for you? Lewis the Lion thought that if they weren’t careful, all this smoking was surely going to put them all in an early grave!

Lewis the Lion wants you to imagine that you were sat with him on that long bus journey back to Makassar. Imagine that you were able to have a conversation with some of the smokers on the bus.
How would you try to persuade them that smoking isn’t good for you?

Helen Molloy has been a Primary Learning and Teaching Consultant, leading on the introduction of Primary Languages in the City of Stoke-on-Trent for the past 5 and a half years. She is passionate about language learning and inspiring children into developing a curiosity and awareness of other people's languages and cultures.
View all posts by Helen Molloy →
This entry was posted in Lewis' Blog and tagged burial, children's travel blog, educational travel blog for children, for kids, funeral, Indonesia, Lewis the Lion, South Sulawesi, Tana Toraja, travel blog, travel blog to inspire kids, travel stories to inspire children, travel writing for children. Bookmark the permalink.