What a lovely pot of tea in the Cameron Higlands! 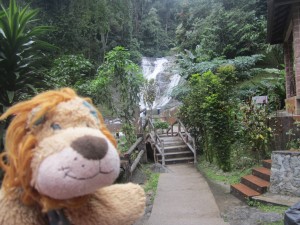 Lewis the Lion comes across locals bathing in a waterfall

As had often happened on his journey, Lewis the Lion seemed to be just in the right place at the right time. The same was true now that he was in Kuala Lumpur as his path had again crossed with his friend Ian who he had first met on the Stray Bus in New Zealand. Luckily for him, Ian was just arriving in Malaysia but had hired a car for a week. That meant that for a couple of days, Lewis the Lion and Helen would join him as he drove to a place of exceptional beauty about 200km away: The Cameron Highlands. 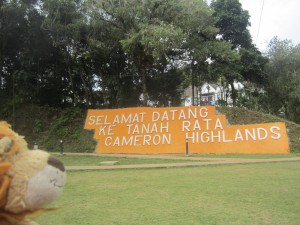 Welcome to the Cameron Highlands!

‘The Cameron Highlands?’ Lewis the Lion thought to himself. ‘Now that doesn’t sound very Malaysian!’ He was right as indeed this area had developed as Malaysia’s famous retreat and farmland while the British were stationed in Malaysia, being named after William Cameron, a British government surveyor who had stumbled across this plateau in 1885 during a mapping exercise. Lewis the Lion thought that it was interesting that students from Singapore would often travel here as it was the closest place to them where they could learn about the agricultural lifestyle. Strawberry and butterfly farms were popular in this area but Lewis the Lion had travelled here because he had heard that it was also famous for its tea plantations. He had never been to a tea plantation before so he was curious to find out how it all worked. After all, tea was the preferred drink of many an Englishman and Englishwoman. When Lewis the Lion thought about it, he had never been to Helen’s house without being quickly offered a cup of tea from a freshly brewed pot of tea on the kitchen table!

While he was in the Cameron Highlands, he got to visit two of Malaysia’s famous tea producers:
*The Cameron Valley Tea Plantation and
*The Sungei Palas BOH Tea Plantation 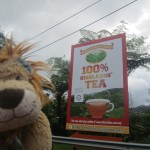 The Cameron Highlands are Malaysia’s most extensive hill stations 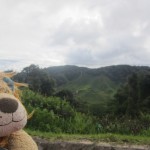 Lewis the Lion gets his first view of the tea plantations 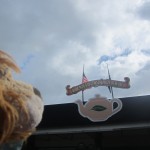 Lewis the Lion looks forward to having a good cup of tea! 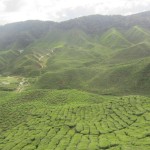 A stunning view over the Cameron Valley tea plantations 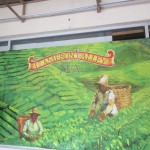 A picture of the traditional tea pickers in the Cameron Highlands 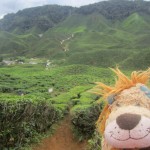 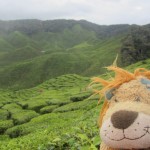 Lewis thinks the tea plantations look like a maze 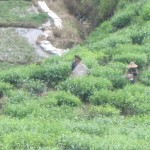 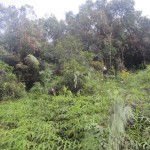 Wild orchids thrive in this climate 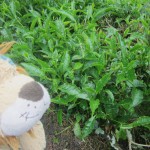 Lewis the Lion sees what tea really looks like! 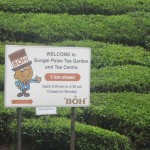 Boh Tea is one of Malaysia’s top tea brands 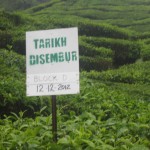 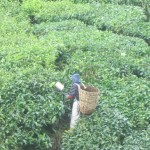 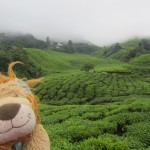 The mist descends over the Boh Tea Plantation 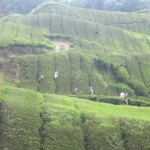 The tea pickers work in the rolling hills

He truly was amazed at how the hilly landscape was covered in lots of short tea-bushes, giving a green, carpet effect. Along with the pathways in between the bushes so that the tea pickers could clip the leaves with ease, Lewis thought they looked rather like a maze from above. Here Lewis the Lion is as he surveys the landscape of the tea plantations.

Lewis the Lion sees some tea plantations in Malaysia

He was intrigued to see how the tea was gathered from the bushes as you can see in this video clip. Click here to see a tea-picker working.

The pickers, who generally wear broad-rimmed hats to protect them from the sun, have big sharp-edged cutters which are rounded. They cut the tips off the tea leaves and then throw them over their shoulders into the basket strapped onto their back.
Once they have clipped the top level of leaves in a section so that it is smoothed flat, they record the date. This is so a rotation system can operate in the tea plantation so that the tea bushes never grow too high.

After walking through the wet and drizzly tea plantations, Lewis the Lion enjoyed nothing better than slurping on a delicious cup of tea, along with savouring a strawberry tart. This Malaysian tea really was tasty and refreshing!

He then turned his attention to some of the history of tea production. He found that the marketing of it was particularly interesting as you can see in one of the photos on the design of the tea box. 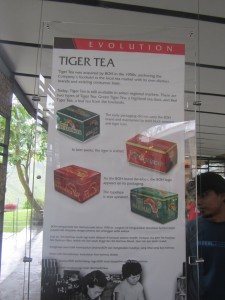 Lewis the Lion learns about the importance of packaging

He has a challenge for you too that you will see at the end of this blog.

Furthermore, after walking through the tea plantations, Lewis the Lion also got to do one of the most challenging hikes of his journey so far. He had been directed down through the misty, atmospheric and ancient Mossy Forest. 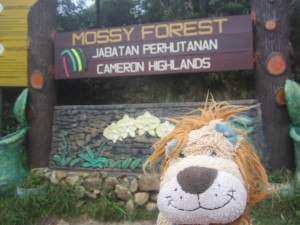 Lewis has a hike to the Mossy Forest

Lewis the Lion was in awe as he realised that some of these trees were very, very old: 200,000 years old to be precise. He wondered what they had seen in the course of their lifetime? And how many generations they would still stand to see in the future when Lewis the Lion and Helen were long gone? He hoped that they would stand proud for at least another 200,000 years to come! 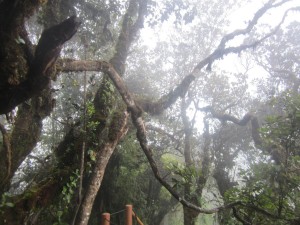 Lewis has a strenuous work out through the undergrowth

As he twisted and turned, stretched and crouched, slid and slipped and hung on for dear life from numerous tree branches, he had a full body work-out that made him ache for days afterwards as he squelched his way through more than 5 km of mud and tree trunk roots down to the roadside below. Whoever had sent him down this particular path, clearly had a wicked sense of humour! At least Lewis the Lion was kept entertained throughout as Ian recounted tales of his work in the police force. Life was never dull as a police officer, that’s for sure!

They only made it back to the town of Tanah Rata in the nick of time so that Lewis the Lion and Helen could catch the coach back to Kuala Lumpur. They would be flying off to their next destination in the morning: the place were they would spend Christmas: Sulawesi, Indonesia.

Imagine that you were responsible for designing a new box for tea for the BOH Tea Plantation. What would your design look like? How would you entice customers to pick up YOUR box of tea instead of another one on the supermarket shelf. How could you make YOUR box stand out from the rest? What colours would you use? What language would you use to persuade people to buy your tea?

Helen Molloy has been a Primary Learning and Teaching Consultant, leading on the introduction of Primary Languages in the City of Stoke-on-Trent for the past 5 and a half years. She is passionate about language learning and inspiring children into developing a curiosity and awareness of other people's languages and cultures.
View all posts by Helen Molloy →
This entry was posted in Lewis' Blog and tagged children's travel blog, educational travel blog for children, for kids, Lewis the Lion, Malaysia, tea plantations, The Cameron Highlands, travel blog, travel blog to inspire kids, travel stories to inspire children, travel writing for children. Bookmark the permalink.