The monsoons arrive in Tioman 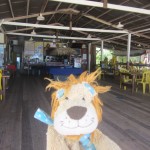 Lewis the Lion from his work station! 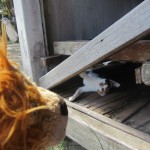 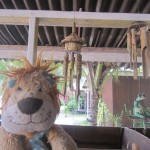 Lewis is lulled by the chimes as the wind picks up 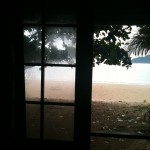 The humidity makes the windows and mirrors steam up 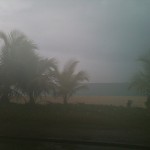 The camera mists up due to the humidity 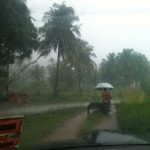 People carry big umbrellas as they cycle along 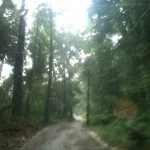 The tropical rainforest glows under the rain drops 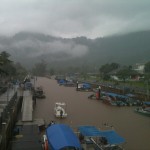 The jungle steams whilst the rain pours down 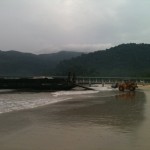 A trawler pulls up on the beach 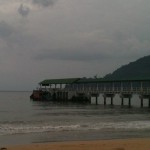 The pontoon sits under some heavy clouds 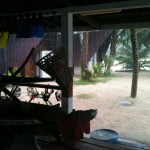 Rain splashes down from the roof 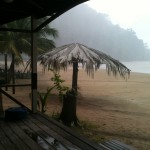 The heavy downpour lasts only for a few minutes 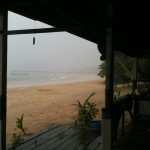 The thick cloud blankets the beach for a few minutes 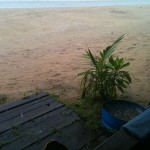 The rain falls thick and fast, splashing in the foot wash bowl


For all Lewis the Lion was on a tropical, almost deserted island, he was still full of busy as he put his mind to remembering and recording his incredible adventure so far. He would love to write as beside him kittens chased each other across the wooden floor and the soothing notes of the wind chimes would carry on the breeze. However, one day he had his head down, beavering away on his blog, when the wind chimes started to ring a fiercer, more regular beat. The monsoons had arrived in Tioman. The usual blue sky was replaced by dark, heavy rain clouds and then the heavens seemed to open. Rain fell so quickly that it pounded off the roof and into the water buckets by the entrance of the reception area. Water started dripping through the roof leaving water patches on the wooden floor below before buckets could be scrambled. You could forget about any washing that was hanging out to dry: the rain had come so quickly that there wasn’t time to rescue it before it got wet again. More than anything though, Lewis the Lion loved the sound of the rain as it thundered down. It didn’t seem to last for too long either: not like he had thought it might. It was more like a tropical storm rather than a relentless downpour. Later on that afternoon, Lewis the Lion smiled to himself as he could see Helen swimming in the bay at twilight. Even though it looked as if the jungle was still steaming behind them, the sea was still warm in temperature and it seemed to be a strange contrast.
At night time with the monsoons, there were times when the electricity would cut out on the island and Lewis the Lion and Helen would have to rely on their head torch (making sure they used the red light so as not to frighten any animals on the beach). During the black-outs, Lewis’ sense of sound was heightened. He could hear the tide by his beach hut as it swept in like a crack of thunder along the shore. He could also hear crickets chirping and croaking frogs: the whole jungle behind them seemed pregnant with noise and activity.
With the more regularly occurring thunderstorms during this monsoon season, this meant that it was low-season for tourists here in Tioman. Lewis the Lion was happy that this was the case as he felt like the beach was his own and he could fully concentrate on his stories. Being able to see the positive side to any situation was truly one of Lewis the Lion’s gifts: he was definitely an optimistic little lion!

Would you describe yourself as an optimist or a pessimist? Give an example.
Would your friends and family agree with you?

Helen Molloy has been a Primary Learning and Teaching Consultant, leading on the introduction of Primary Languages in the City of Stoke-on-Trent for the past 5 and a half years. She is passionate about language learning and inspiring children into developing a curiosity and awareness of other people's languages and cultures.
View all posts by Helen Molloy →
This entry was posted in Lewis' Blog and tagged children's travel blog, educational travel blog for children, for kids, Lewis the Lion, monsoon, rainstorm, Tioman, travel blog, travel blog to inspire kids, travel stories to inspire children, travel writing for children. Bookmark the permalink.