Today was the first day of Advent and it was like no 1st December that Lewis had ever known before. It was hot and sunny, and here he was on a beach watching evening crabs tentatively creeping out of their sandy holes whilst Helen had gone for regular evening dip in the sea. He felt like he was positively miles away from the festive frenzied madness back home in the UK. Normally at this time of the year back in England it would be cold with dark mornings and evenings, but with coloured lights and tinsle appearing all around to cut through those winter blues. If he was home now, he might be opening up the first little door of his Advent calendar and he wondered what might be behind it?

Of course this 1st December, Lewis the Lion was in Malaysia, a predominantly Muslim country so he didn’t expect to see much in the way of Christmas at all. However, a couple of weeks later on, he could’t have been further from the truth. As the bus lurched through the roadside puddles of water on his way to Malaysia’s capital city, Kuala Lumpur, Lewis the Lion didn’t have any great expectations on this dismal day. How wrong he was! Kuala Lumpur (or KL as it is affectionately called) came as the biggest surprise of his trip so far as not only was it a buzzing, dynamic city but it was also adorned with some of the biggest and boldest Christmas decorations that Lewis the Lion had ever seen in his life. For the first time in this Advent season, Lewis the Lion suddenly felt really Christmassy with Christmas decorations sparkling all around him and the strains of ‘Gloria in excelsis Deo’ drifting through the shopping mall as a choir sang live from a central podium.

Click on this You Tube video to see why Lewis the Lion suddenly felt in the Christmas mood.

He felt a wave of excitement as he knew that Christmas was close at hand. Even if he wouldn’t be home with his family and friends, he wondered what else he might be doing differently instead this year? 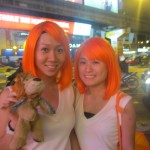 People are full of Christmas spirit on the streets of K.L. 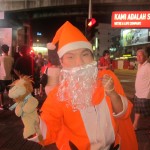 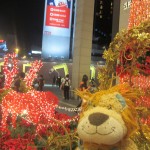 The streets and shops are awash with spectacular Christmas decorations 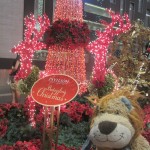 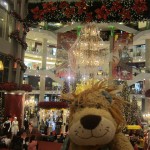 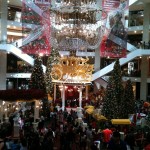 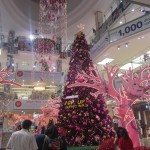 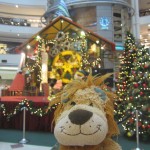 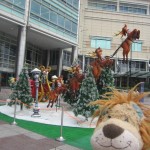 Lewis the Lion sees Santa’s sleigh by the Petronas Towers

What sort of things help to get you in the Christmas mood on the run up to Christmas?

Or is there another special event that you look forward to during the year?

How do you help prepare for the celebration?