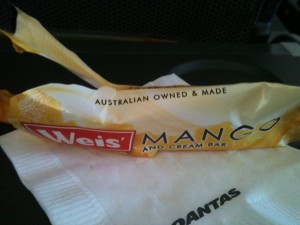 Lewis the Lion felt excited as he approached Australia as it was clear that warm weather was to follow if the ice lolly he was given on the flight was anything to go by. 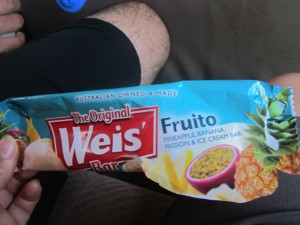 He noticed that the food in any country seemed to reflect the environment and as Australia was a hot and sunny country, it seemed only natural that they had their own, unique brand of fruit ice lollies. 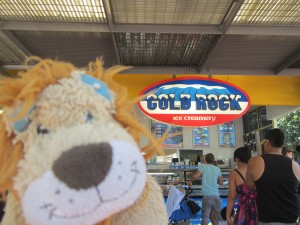 Lewis the Lion licks his lips at this Australian ice-cream

They also had a very special type of ice-cream parlour which was a nationwide store. 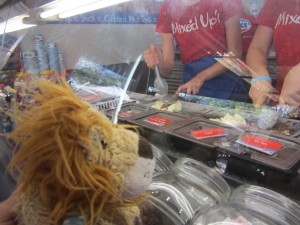 Here you would choose your preferred flavour of ice cream and then extras like chocolate caramel or smarties and then have them smashed up into the ice cream: delicious! 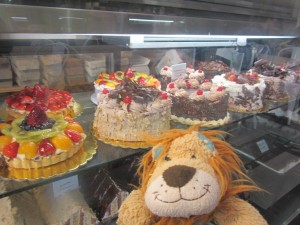 St Kilda is famous for its cake shops

Ice cream wasn’t the only sweet treat that Lewis the Lion indulged in whilst in Australia but so too were the famous cakes in the bakeries of St Kilda, outside of Melbourne. 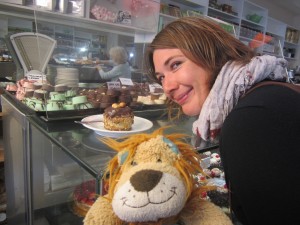 Lewis the Lion chooses his favourite cake with Marion

Lewis the Lion could hardly make up his mind when he was confronted with such an array of wondrously tempting patisseries. 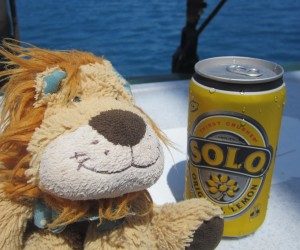 Lewis the Lion with an Australian lemonade

Like the ice lollies and ice-cream, Lewis the Lion discovered in Australia that there was an even greater choice of soft drinks, such as this refreshing lemonade. For adults there were also lots of fine wines but Lewis the Lion didn’t taste any of those although he did pretend to drink some Australian champagne when he was at the Melbourne Cup! 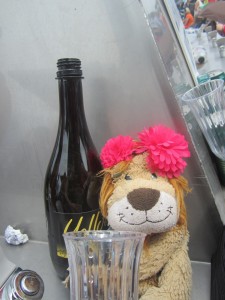 Whilst in Australia Lewis the Lion recognised that the Australians had been influenced by many of its immigrant population in terms of its cuisine. You could find all types of international foods like sushi, churros and pizza. He discovered that Italian style coffee bars are particularly popular serving all sorts of fabulous coffees, (one of his favourites being a Flat White – a type of milky coffee without too many bubbles). 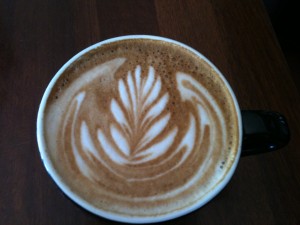 Lewis the Lion’s first Australian coffee at the Site Café

Breakfasts too seemed to be big business in Australia, especially hearty brunch style breakfasts, as seen on this typical menu. 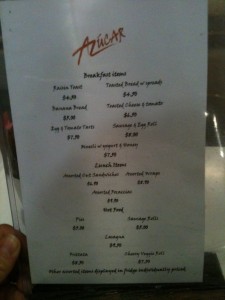 Lewis the Lion was really lucky that his first introduction to Australia involved the best coffees and the best brunches at Helen’s cousin’s café bar. This is a photo of a delicious breakfast he tried that was a mixture of salmon, poached eggs and hollandaise sauce called ‘Eggs Montreal’ – very tasty indeed! 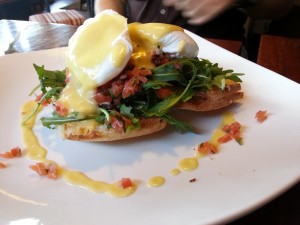 Eggs Montreal – a deliciously filling breakfast at the Site Café

One time whilst Helen was at the airport, Lewis the Lion had a real laugh at her as she tried to open a sachet of tomato ketchup to put on her breakfast bacon sandwich. 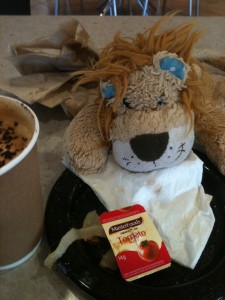 Lewis the Lion laughs at Helen’s battle with the ketchup sachet!

Unlike most sachets which peel back this one squirted out right from the centre…all over her top! Lewis the Lion killed himself laughing at such a funny sight! 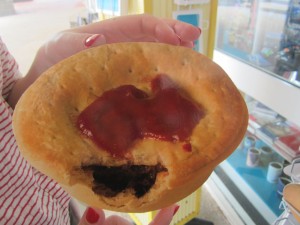 Pies are a popular snack in Australia

However, being surrounded by miles and miles of coastline, it only seemed fitting that fish was a popular choice on an Australian menu, and like in New Zealand, Lewis the Lion discovered that different types of fish existed, such as Ocean Barramundi and Coral Trout. 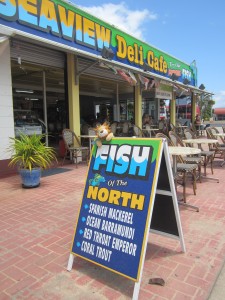 Typical fish from the North-East Coast of Australia 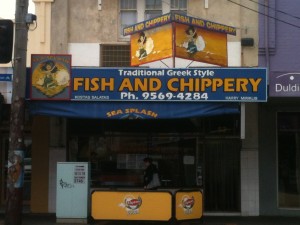 An Australian-Greek fish and chip shop!

However, perhaps the most acclaimed Australian food of all that Lewis the Lion encountered was a yeast-based extract, Vegemite. (A bit like Marmite). Australians seemed to be very proud of this product but like Marmite,it seemed to divide opinions: people either seemed to love it or hate it! 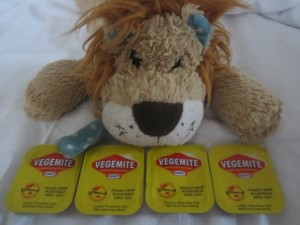 Vegemite is perhaps the most famous Australian food

But the biggest surprise that Lewis the Lion got when he was in an Australian restaurant one time was when he read this menu: 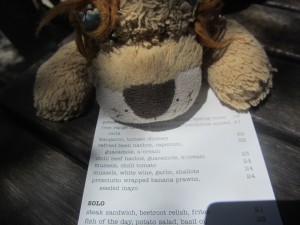 Lewis the Lion spots something interesting on this Aussie menu. Can you?

Can you spot the Australian surprise too?

If you were visiting Australia, which Australian foods would you like to try?

Helen Molloy has been a Primary Learning and Teaching Consultant, leading on the introduction of Primary Languages in the City of Stoke-on-Trent for the past 5 and a half years. She is passionate about language learning and inspiring children into developing a curiosity and awareness of other people's languages and cultures.
View all posts by Helen Molloy →
This entry was posted in Lewis' Blog and tagged Australia, children's travel blog, educational travel blog for children, food and drink, for kids, Lewis the Lion, travel blog, travel blog to inspire kids, travel stories to inspire children, travel writing for children. Bookmark the permalink.