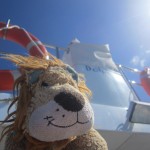 Lewis the Lion on the Dolphin Encounters boat 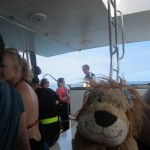 Lewis the Lion is very excited about the day ahead! 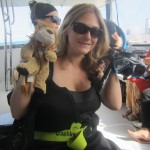 Helen gets ready with her wetsuit, snorkel and coloured belt 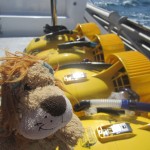 Lewis checks out the aqua scooters lined up 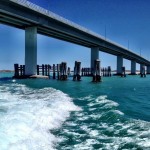 Leaving Rockingham behind in search of a dolphin encounter 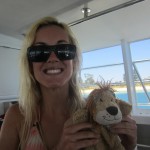 Lewis is happy to meet Sindy, the Dolphin Girl 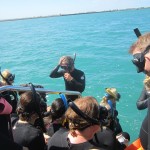 The snorkellers get ready for the command ‘Go!’ 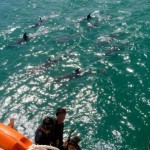 A pod of dolphins seem to play around the swimmers 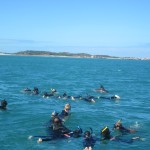 The dolphins swim around the human chains 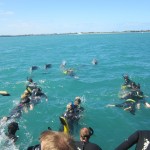 The wild dolphins come and play with the swimmers, whilst Sindy swims around them with the water scooter 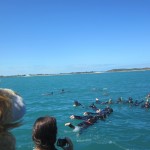 Lewis the Lion can’t believe his luck at seeing wild dolphin in the water! 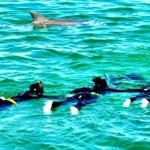 The wild bottle-nosed dolphins perform for the swimmers 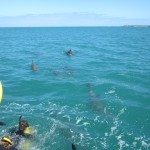 The pod of dolphins are curiuos about the swimmers 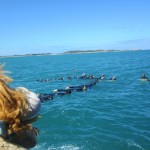 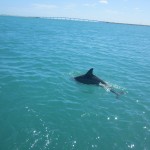 A dolphin rises playfully out of the water 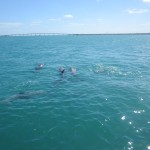 How many dolphins can you see in this pod? 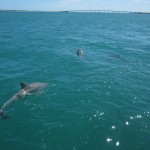 The dolphins seem to chase each other around 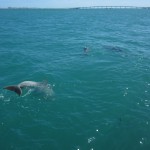 A dolphin leaps out of the water and dives back down 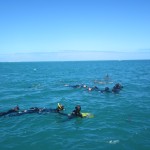 The wild dolphins delight the snorkellers 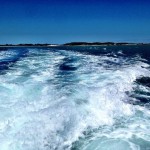 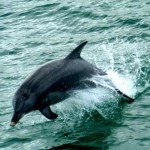 Kate snaps another photo of a dolphin jumping from the water 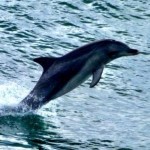 A dolphin leaps from the water behind the boat

Lewis the Lion yet again, could not believe his little luck. He was going to leave Australia on a high, that’s for sure as he had been invited to swim with wild dolphins. His friend Alicia could not attend and so had kindly asked Helen and Lewis the Lion to go in her place together with her friends Kate and Charlene. Naturally, Lewis the Lion had jumped at the chance especially after he had relinquished the same opportunity when he was in Kaikoura in New Zealand in favour of an Albatross Encounter. The words of his wise mother echoed around his head, “If it’s meant for you, it won’t pass you by.” What a fortuitous turn of events indeed!

So like all of the best opportunities Lewis the Lion seemed to have had on this trip, he was up very early at 5:30 am as he had to travel on the Perth train system from Beckenham to Rockingham, in the South of Perth. He there met Alicia’s friends, Kate and Charlene and they headed to the pier to meet the ‘Rockingham Wild Encounters’ boat. Here he was welcomed aboard by five crew members: the captain, Terry, Sindy, who they also called ‘Dolphin Girl’ (Lewis the Lion would find out why in a short moment or two) and the deckhands, Louis, Christian and Taylor.

First things first, Helen had to fill in a disclaimer form saying that she would be happy to wear an electronic shark shield device should she be at the back of the line. This was because besides the wild bottle-nose dolphins they were hoping to swim with, the west coast of Australia was known for its shark populations. Obviously, the group of snorkellers didn’t want to encounter sharks as well so the first and last swimmer in a chain had to wear one of these automatic pulsing devices to prevent them from approaching.

Once aboard wetsuits, masks, snorkels and belt colours were quickly disseminated. (Belts were issued to sort the swimmers into groups according to the swimming ability). Clothes and possessions were niftily tidied away in sliding crates beneath the seats. In the meanwhile Sindy gave the group of about 40 plus a briefing about what they hoped to expect that morning. As they were dealing with wild dolphins, there were no guarantees of anything but the captain would head towards a place where there had been sightings before. She told them that their experience would depend very much on the behaviour the dolphins were displaying on that given day, e.g. if they were feeding, breeding, socialising, etc. So, once the dolphin pod had been located, the experts would then need to assess their behaviour in the first instance.

It seemed like no time had passed at all before a dolphin pod had been spotted and three groups of snorkellers of the six were quickly identified to exit off the back of the boat. However, the first swimmer to exit the boat was Sindy and Lewis the Lion suddenly understood why she’d been given the nickname ‘Dolphin Girl’ as with her aqua scooter she dived deep, circled, played with and encouraged the dolphins to stay close. The wild bottle- nosed dolphins certainly seemed to be playing ball as they seemed to be in a playful mood. As these first three chains of snorkellers left the boat, Lewis the Lion stood back and paid attention to the wondrous scene in front of him. About nine bottle-nosed dolphins with their distinctive dorsal fins and tails were rhythmically rising and falling in and out of the water. It simply took his breath away.

The briefing had obviously been effective as the swimmers seemed to operate with military precision and coolness. Quietly they waited on the steps at the back of the boat waiting for the signal from the expert at the front to place their masks on and climb down the ladders. They quickly got into the water, looped a hand through each others’ belts and placed their faces straight into the water. Without kicking their legs, they floated in the water like starfish, simply enjoying the ride as they were pulled along from the front. They had been told that if they relaxed and stayed nice and still on the surface, then the dolphins were more likely to hang around as they can pick up on human emotions. Lewis the Lion learnt that dolphins are very curious and intelligent animals and seemed to be intrigued by the snorkellers off the back of the boat as you can see in this video clip on You Tube.

Lewis the Lion and the wild bottle-nosed dolphins

Before long it was the turn of the green-belted group: Helen and her friends. She was very excited as she wrapped the velcroed shark shield on her ankle as the last one in the human chain. Silently she entered the cool water and grabbed onto the belt of the lady in front of her and placed her face into the water, staying as still as she could on the surface. She could hear a strange buzzing, then a clicking noise travelling through the water before she saw a couple of bottle-nosed dolphins swim right underneath her! What a magical moment to be within touching distance of these magnificent creatures. However, Helen kept her hands well by her side as she knew that if she touched them she could pose a health risk to these wonderful creatures. That’s because dolphins have a special bacteria on their skin which acts as a sunscreen in the water. Lewis the Lion also learnt that these dolphins are indeed incredible mammals. The clicking, squeaking noise was in fact the dolphins way of navigating as they rely on echolocation. They ‘click’ 300 times a second and the reflected sound helps them see where they are.

Helen couldn’t believe her luck as her group got more than three turns in the water observing the wild dolphins close at hand. They almost seemed to be putting on a performance for the snorkellers this morning, at times swimming playfully right underneath them and beside them. A simply incredible, life-affirming experience. The nine dolphins were well-known to the crew and they had already identified them and given them names in the past. There was Chip with a flat edged dorsal fin and then Chase who chased around her and Pimple. Chip’s second daughter, Bianca, was there too with her sister, Zit so named because of the pimple on face. Shady had a marking on his head and Mini was the fat dolphin . Next was Mouse, Mini’s son and last of all, Blizzard who was happy to splash about on the surface for the delighted swimmers. Lewis the Lion learnt that dolphins in the wild can live up to 45-50 years old, whereas in captivity, their lifespan is often halved. He was therefore grateful that he and Helen and her friends had had the chance to see these amazing, intelligent mammals in their natural environment.

As the boat sped up to return home, Lewis the Lion couldn’t believe how quickly the time had raced by. He’d simply been in what seemed like a trance for the last couple of hours enjoying the company of these fabulous, mesmerising dolphins at the back of the boat. However, the show wasn’t quite over yet as in the white crests of the waves generated from the boat, the dolphins swam alongside, putting up a chase and leaping out of the water, enchanting the people on the boat. Lewis the Lion felt like he was witnessing a grand finale to his whole Australian trip: indeed this had to be one of his highlights. He truly felt like he was the luckiest lion that had ever ventured Down Under!

Lewis the Lion’s encounter with wild dolphins made him want to go away and find out more about these incredible creatures. What interesting facts can you find out about dolphins too?

Helen Molloy has been a Primary Learning and Teaching Consultant, leading on the introduction of Primary Languages in the City of Stoke-on-Trent for the past 5 and a half years. She is passionate about language learning and inspiring children into developing a curiosity and awareness of other people's languages and cultures.
View all posts by Helen Molloy →
This entry was posted in Lewis' Blog and tagged Australia, children's travel blog, educational travel blog for children, for kids, Lewis the Lion, Perth, Rockingham, travel blog, travel blog to inspire kids, travel stories to inspire children, travel writing for children, wild dolphins. Bookmark the permalink.