One Saturday afternoon, Lewis the Lion and Helen were really lucky to be accompanying the fabulous children, Caoimhe and Liam, with their amazing mum and dad, Karen and Andrew to a unique wildlife experience. They were heading for Phillip Island, about a couple of hours south of Melbourne, to see the world’s smallest penguin’s, the Little Penguins (also known as the Fairy Penguins or the Little Blue Penguins) returning home at sunset to one of the largest penguin colonies in Australia. This ‘Penguin Parade’ was nothing short of ‘magical’ in Lewis the Lion’s eyes.

The family and friends first had a walk around the cliff top boardwalks of the scenic Nobbies headland. Hidden in the verges of this rugged coastline were nesting seabirds and copperhead snakes. Lewis the Lion was just glad that the copperhead snakes were sticking to being ‘shy’ today! From here, looking out to the sea were impressive blow-holes and Lewis the Lion was told that he might even be able to see fur seals, dolphins or migrating whales. On this particular occasion he didn’t but he didn’t worry too much as that was not the main reason for his visit to Phillip Island here today. Rather, he had come to see if he could spot some of the world’s smallest penguins (at 33 cm) as they made their way back home for the evening?

Not far from the Nobbies was the Penguin Visitor Centre where Lewis the Lion started to learn some more about these special penguins that live permanently in Australia. Firstly, he was a bit disappointed to know that he couldn’t take any photos or videos of the penguins themselves as it might scare them so he decided to do the next best thing and have his photo taken beside some of the real life-size posters of them instead. Lewis the Lion realised that they were about the same size as him: how funny! They really were tiny then.

He had come to see the Penguin Parade at a wonderful time of year as it was when the penguins were breeding and little chicks were starting to appear in their burrows. Just the night before, there had been 1,386 recorded returning penguins and Lewis the Lion only hoped that he would be so lucky that evening? Lewis learnt that the Little Penguins lay two eggs and that they take 35 days to hatch. One of the parents will remain with the new chicks whilst the other goes out fishing for the family, only returning in the evening at dusk, out of the sight of predators.

So, Lewis the Lion, Helen and the family sat and waited on concrete benches by the shore along with hundreds of other onlookers. In the chilly twilight they kept their eyes peeled out to sea to see who would be the first one to spot one of the returning penguins. As the sun started to set at around 8:20 pm suddenly a tiny penguin, one lonesome brave scout, could be seen being washed up in the surf. There was real hesitation in its movements as it flowed in and out with the tide for about five or ten minutes with more Little Penguins appearing in the surf behind it. Once they were one hundred percent sure that the coast was clear, they eventually waddled out from the waves en masse and onto the sandy beach, to the delight of the waiting crowd. In the fading light, a group of Little Penguins then made a dash to get to their burrows as quickly as possible. They really were a true delight to watch and it was unbelievable at just how quickly they could move judging from the height of them. Lewis the Lion rather compared them to little marathon runners as they were fully focused in their race to get home. Some little chicks were already started to wait expectantly at the entrance to their burrows. They must have been hungry!

What a magical experience this was indeed and Lewis the Lion was happy to have shared it with such a fabulous Australian family. 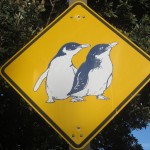 Watch out for Little Penguins! 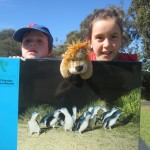 Caoimhe, Liam and Lewis the Lion peek over the penguin sign 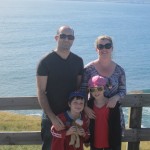 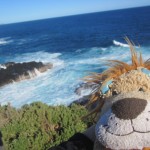 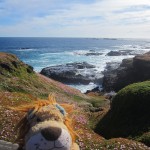 The Nobbies is a very pretty place indeed 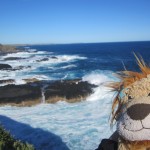 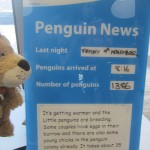 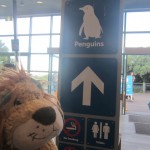 Lewis the Lion heads for the Little Penguin viewing spot 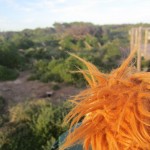 Lewis the Lion spots some Little Penguin burrows with the chicks! 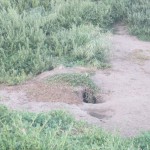 Little Penguin chicks peek out from their burrows 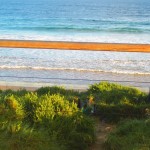 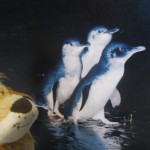 Lewis the Lion sees how big the Little Penguins are 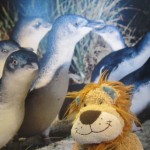 Lewis the Lion thinks the Little Penguins are really sweet 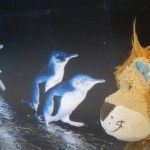 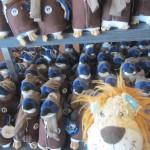 There’s lots of Little Penguin merchandise in the tourist shop 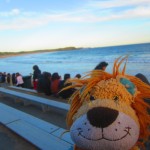 The crowds gather by the sea to see the magical, penguin phenomena 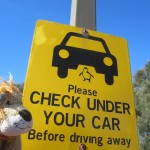 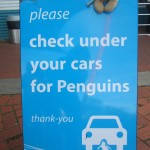 Lewis the Lion heeds some important advice whilst on Phillip Island

If you are interested to learn more about the Little Penguins and the Penguin Parade, click on this link. You can even download an app with more information and fun facts by clicking here.

Helen Molloy has been a Primary Learning and Teaching Consultant, leading on the introduction of Primary Languages in the City of Stoke-on-Trent for the past 5 and a half years. She is passionate about language learning and inspiring children into developing a curiosity and awareness of other people's languages and cultures.
View all posts by Helen Molloy →
This entry was posted in Lewis' Blog and tagged Australia, children's travel blog, educational travel blog for children, for kids, Lewis the Lion, Little Penguins, Melbourne, Phillip Island, The Nobbies, The Penguin Parade, travel blog, travel blog to inspire kids, travel stories to inspire children, travel writing for children, Victoria. Bookmark the permalink.