Like in South America and New Zealand, Lewis the Lion discovered that travelling around Australia, particularly down the East Coast was probably best done on a coach. He was able to get himself a special deal with the Greyhound Bus Company which included 3,000 kilometres of road travel and 14 nights’ stay at a youth hostels in the YHA group. 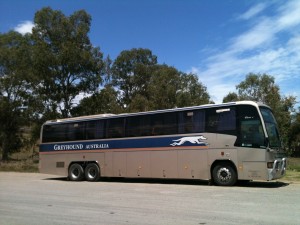 That suited Lewis the Lion just fine financially as it was a more economical way of getting around, but what it did mean was that there were some very long bus journeys ahead. Australia after all is a very big country and from Cairns to Sydney for starters, it was over 2,600 kilometres.

Lewis the Lion seemed to spend hours just looking out of the window at the seldom changing scenery. From Cairns, he noticed more tropical plants like banana trees but as the bus headed south, he saw lots of farmers’ fields and masses of scrubland. 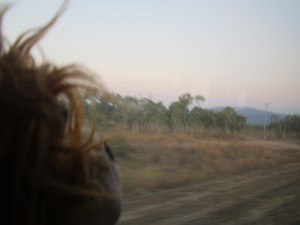 Passing by miles and miles of countryside

Generally, he decided to break his journey up into manageable amounts so that no journey was longer than 14 hours. However, he discovered that rather than wasting his days travelling, he preferred to catch the night buses and so he could sleep as he journeyed along. He would however be woken up at all hours of the night so that the drivers could take a break. He rather liked the name of this café that he came across on one particular night! Very Aussie indeed! 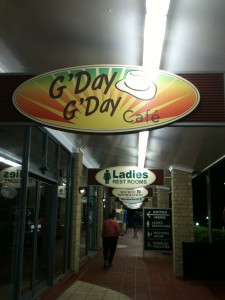 On one particular grey day, on his way to Byron Bay, he passed along the Gold Coast through a town which he thought sounded like a pretty cool place to be: Surfers Paradise!

Tall apartment blocks run all along the coast

However, the view outside the window seemed to tell a different story. There were lots of high-rise swanky apartment blogs sprouting up all over the place. Under a bright sun, surrounded by palm trees it might looked modern and sleek but under a cloudy sky, Lewis the Lion thought it just looked tacky and brash. 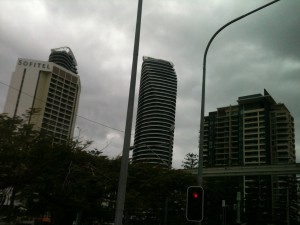 Modern flats shoot up all along the coastline

He thought that he was maybe being unfair and that maybe on another journey he would go back there and get a totally different impression? That was the beauty of travel: your experiences could be so effected so much by the people you were with, the weather, etc. and it was common that different people would have totally different impressions about exactly the same place. What was funny was that on this journey, he met a fellow traveller he had met some time ago at Airlie Beach, Dave. It really was a small world!

What was also strange on this particular journey was that as Lewis the Lion passed from the Queensland and into New South Wales, Helen had to move her watch an hour forward. 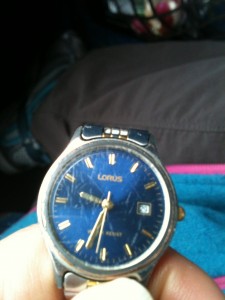 Queensland is an hour behind New South Wales

This was because in NSW, they are on daylight saving time. 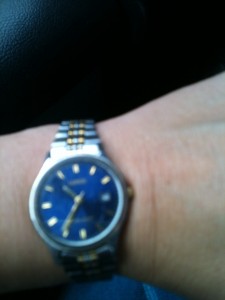 This took Lewis the Lion a little by surprise. He’d always thought that the time zone changes worked on longitude but here it was clearly a latitude factor too as they headed further south.

For now, Lewis the Lion was headed to another place that he knew was famous for surfing: Byron Bay!

Have you ever looked at a world map to see the time zone changes? Is there anything that surprises you? If so, what?

Helen Molloy has been a Primary Learning and Teaching Consultant, leading on the introduction of Primary Languages in the City of Stoke-on-Trent for the past 5 and a half years. She is passionate about language learning and inspiring children into developing a curiosity and awareness of other people's languages and cultures.
View all posts by Helen Molloy →
This entry was posted in Lewis' Blog and tagged Australia, children's travel blog, coach journey, educational travel blog for children, for kids, Greyhound, Lewis the Lion, travel blog, travel blog to inspire kids, travel stories to inspire children, travel writing for children. Bookmark the permalink.