Lewis the Lion visits the homes of the rich and famous in Beverly Hills, L.A. 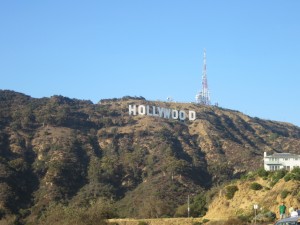 Lewis the Lion was exhausted. Due to a technical failure with American Airlines’ computer system, he’d not managed to get through the security checks in time in order to board his flight back to Los Angeles. Many other people were also left stranded in Las Vegas and his next flight back to L.A. was also delayed due to the thunderstorms that hit during the day. As a consequence, he’d been stuck at Las Vegas airport all day and so by the time he made it to L.A. to stay at have his final Couchsurfing experience, he was very tired indeed. 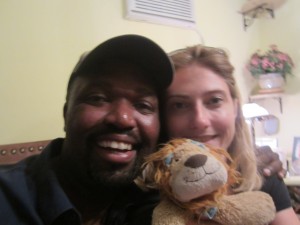 Eugene, his host, was very accommodating and even came out late to pick Helen and Lewis the Lion up and had already prepared dinner for them: a delicious spaghetti bolognaise. Likewise, Eugene’s new housemate, John, also made Lewis the Lion and Helen feel right at home. Eugene was an experienced CouchSurfer and gave Lewis the Lion some very good advice on what it meant to stay safe and to be a good host or guest. He said it was always important to check references very thoroughly indeed and as a guest he liked the thought that Lewis the Lion had brought a little gift along with him!

The next day, Lewis the Lion was able to have a little lie in which he really needed. He would be flying to New Zealand later that evening and so needed to get some final postcards posted off before he left the United States. John very kindly gave him some stamps. He was then able to enjoy one final American lunch at Denny’s restaurant before he soaked up some sun by Eugene’s pool and spa. What a lucky lion! 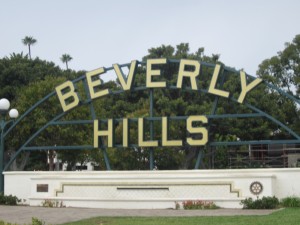 Many celebrities in L.A. live in Beverly Hills

He was luckier still when Eugene got in from work as he gave Lewis the Lion a personal tour guide of some of the most elegant Los Angeles neighbourhoods, notably Beverly Hills and Bel Air. 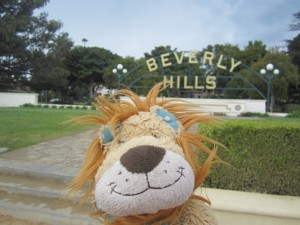 Lewis the Lion poses by the Beverly Hills sign

Beverly Hills and Bel Air are famous for their exclusive mansions designed to house the rich and the famous. From the road, Lewis the Lion could only imagine how huge many of these houses were as many of their walls were high to prevent the public from peering in. 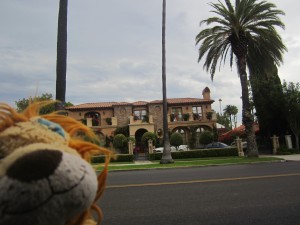 One of the exclusive mansions in Beverly Hills

Privacy must be a key issue for such celebrities and security around the properties seemed very high indeed. Eugene pointed out properties belonging to former Hollywood stars like Marilyn Monroe and Fred Astaire and then some modern day celebrities like Pete Sampras, Julie Andrews, Jennifer Anniston, Nicholas Cage, Rod Stewart, Richard Gere, various members of the Clooney family, the Beckhams and more besides. It really did seem like a list of A-stars! 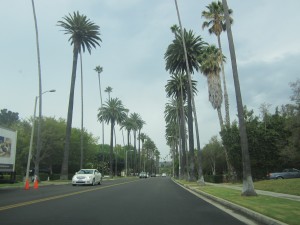 After another cheeky spin down Rodeo Drive, the most elegant shopping street in Los Angeles,

Lewis the Lion takes another cheeky ride down Rodeo Drive! 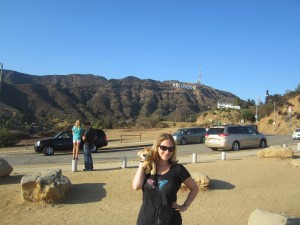 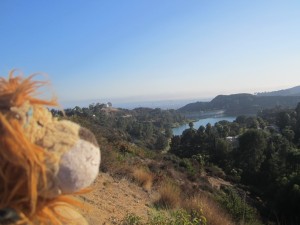 From West Hollywood Lewis can see a beautiful lake

He told them that Madonna had formerly had her home right in this vicinity and Lewis the Lion was not surprised as it was such a great location. 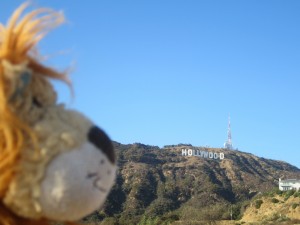 The evening seemed to end all too soon and Lewis the Lion were grateful for Eugene’s great company and the time he had given them to show them around his city. 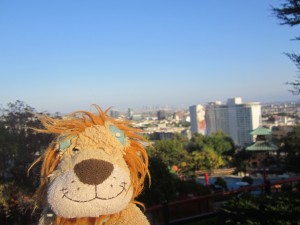 It was then time to head to the airport where Lewis the Lion tucked into a Californian speciality that he had been meaning to try the whole time he had been in the USA but just had never got around to it: fish tacos. To his surprise he thought that they tasted like a posh fish-finger sandwich! (Check out Lewis the Lion’s next blogs where he tells you all aboutAmerican food and registration plates!). 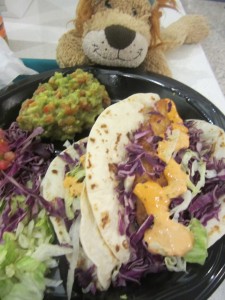 Lewis the Lion could only imagine the homes that lay on the other side of those high walls, fences and gardens.

If you were a rich and famous celebrity, what would your house look like?

Design it or describe it. Pretend that money is no object!

Helen Molloy has been a Primary Learning and Teaching Consultant, leading on the introduction of Primary Languages in the City of Stoke-on-Trent for the past 5 and a half years. She is passionate about language learning and inspiring children into developing a curiosity and awareness of other people's languages and cultures.
View all posts by Helen Molloy →
This entry was posted in Lewis' Blog and tagged America, Beverly Hill, celebrities, children's travel blog, educational travel blog for children, Hollywood, Lewis the Lion, Los Angeles, Rodeo Drive, USA. Bookmark the permalink.