After visiting the awe-inspiring Natural Wonder of the World, the Grand Canyon, Lewis the Lion was catapulted back to the artificial world of Las Vegas. 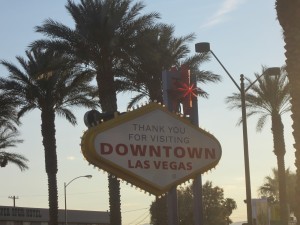 Nonetheless, there were several different activities that he hoped he’d get a chance to do revolving around some of its themed 5-star hotels on The Strip. 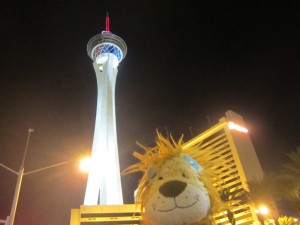 Lewis the Lion thoroughly enjoyed his visit to the top of Stratosphere!

One such activity was to visit the tallest hotel in Las Vegas (the 9th tallest tower in the USA) for its vantage point over The Strip itself. This hotel designed like a tower is called Stratosphere. 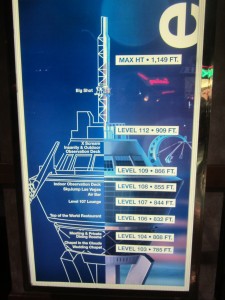 So, Lewis the Lion made a point of visiting this hotel (which was within walking distance of his own hostel) during twilight at 7 pm as he knew then that he would get to see great views over Las Vegas both during the day and night and compare the two. 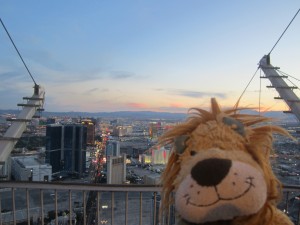 Lewis the Lion has a view of the Strip at sunset

First he had to pay for the entrance ticket – a steep $18. You could also pay for rides which were at the top of the tower but Helen told Lewis the Lion that it would be just as much fun seeing petrified people being shot off 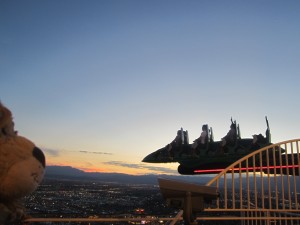 and up the side of the building as doing it themselves. 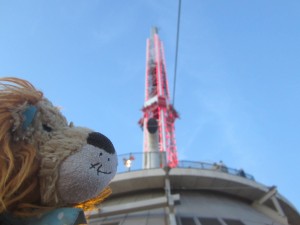 She was right as Lewis the Lion did end up laughing his head off at the screams and scared looking people at the top of the tower!

After going through some security scanners, the ride to the top of the tower seemed like a bit of a thrill-seeking activity in its own right as Lewis the Lion had to catch the lift (or ‘elevator’ as it’s called in America) to the 109th floor! He could feel his ears popping as the lift ascended all those levels in a flash. 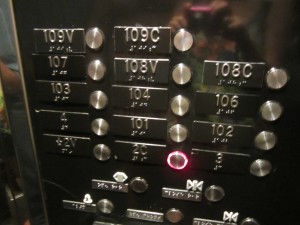 The lift takes Lewis the Lion to the 109th floor!

He the stepped onto the observation deck to survey Las Vegas as the night sky started to close in. The big, brash hotels stood in contrast against the lower-lying buildings of the city and in the distance Lewis the Lion could see the mountains surrounding this desert city. 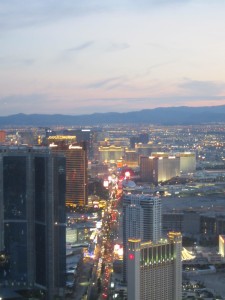 He enjoyed trying to make out the hotels he recognised from his previous walks down The Strip. He was a little disappointed that he couldn’t see all of them as he thought he might be able to do but for now he could make out The Bellagio, Mirage, Caesar’s Palace, Circus Circus and Encore. 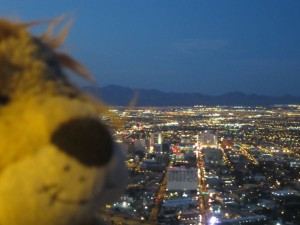 Lewis the Lion sees a twinkling Las Vegas from above

Watching the fading light of the night sky meant that the lights below seemed to grow in brightness and seemed to dazzle in a whole range of colours. ‘Just magical,’ thought Lewis the Lion, breathing in the warm, desert air, ‘even if it is all man-made!’ 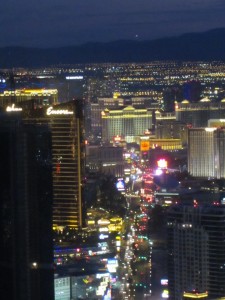 The Las Vegas Strip by night

After staying up at the top for half an hour or so, Lewis the Lion and Helen decided to make tracks back to their hostel at the bottom of The Strip, a much more basic affair compared to those posh hotels they had been looking at for the last half hour! 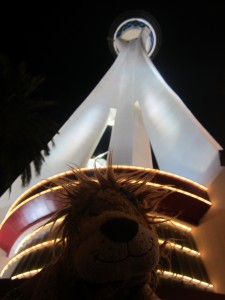 Lewis the Lion at Stratosphere’s base

However, on their way back down, Lewis the Lion noticed designs for other famous towers from around the world. He recognised some of them: the Eiffel Tower in Paris, France and the Petronas Towers in Kuala Lumpa, Malaysia. However, he couldn’t be one hundred percent sure of the others?

Can you help Lewis the Lion to do a bit of research about what these tall towers are in these designs? 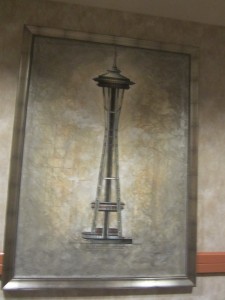 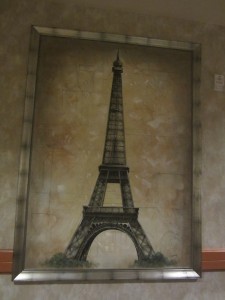 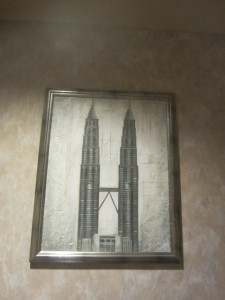 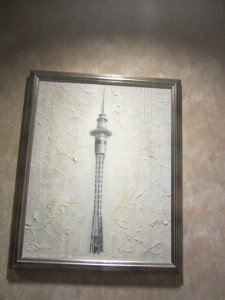 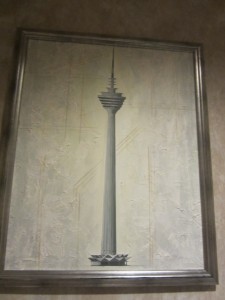 Maybe this website on the World’s Tallest Buildings can help you on your way?

Let Lewis the Lion know what you manage to find out!

Helen Molloy has been a Primary Learning and Teaching Consultant, leading on the introduction of Primary Languages in the City of Stoke-on-Trent for the past 5 and a half years. She is passionate about language learning and inspiring children into developing a curiosity and awareness of other people's languages and cultures.
View all posts by Helen Molloy →
This entry was posted in Lewis' Blog and tagged children's travel blog, educational travel blog for children, hotel, Las Vegas, Lewis the Lion, the Stratosphere, tower, USA. Bookmark the permalink.