Lewis changes time zones by crossing over a dam! 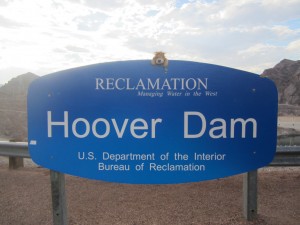 Lewis the Lion poses by the sign for the Hoover Dam

From the Grand Canyon, the coach then headed in the direction of a very important dam between the States of Arizona and Nevada: the Hoover Dam. 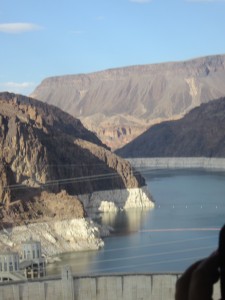 The dam supplies the water to the city of Las Vegas

When it was built between 1932 and 1936, it was one of the most impressive engineering achievements known to man: controlling the Colorado River was no easy feat. 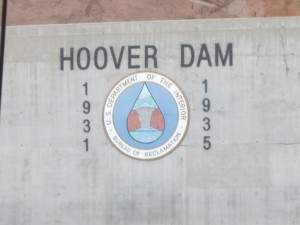 It took four years to build the Hoover Dam

In fact, many men sadly lost their lives during its construction and this statue at the top of the dam pays tribute to them. 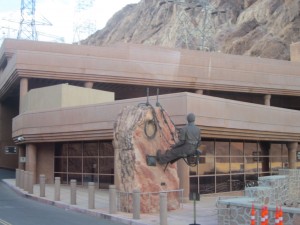 A tribute to the men who built the Hoover Dam

So for over 70 years, the Hoover Dam (controversially named after a U.S. President who backed the project) has been helping to control floods, irrigate the land and also produces hydroelectric power and the water demands for the neighbouring states of Arizona, Nevada and California. 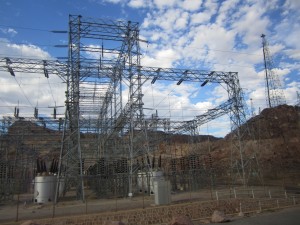 Being close to the Grand Canyon and Las Vegas, the Hoover Dam attracts a large number of tourists and because of this, security is also tight around the complex, especially with it housing a power plant. 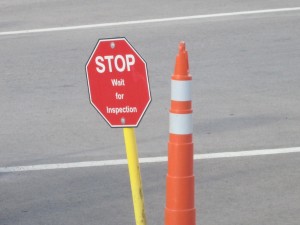 All vehicles are checked before entering the area surrounding the dam

A policeman even got on Lewis the Lion’s bus to check that everything was in order! 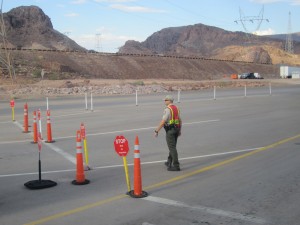 Security checks are tight at this location

The dam itself is a huge arched, concrete wall, rising up 221.4 metres from the ground. 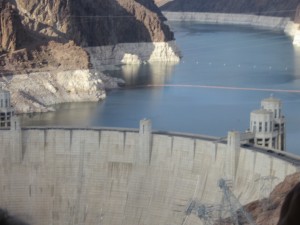 The dam wall rises high above the canyon floor

For all that it is manmade, Lewis the Lion thought that it looked serenely beautiful with the enormous volume of water resting peacefully behind the dam itself, surrounded by the dry, mountainous landscape. 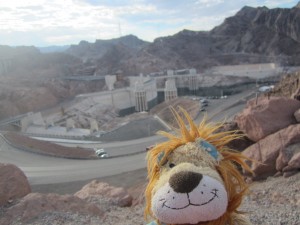 Lewis the Lion sees the Hoover Dam wall from above

Lewis the Lion first saw the dam from a special bridge called the Hoover Dam bypass which had taken fifty years to build! 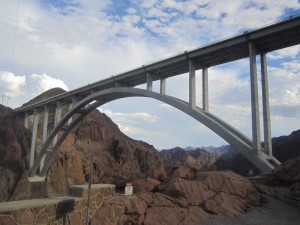 However, he liked it best when he drove across the bridge next to the dam 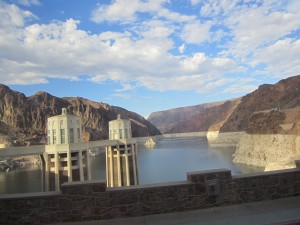 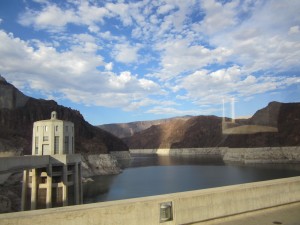 ‘How strange that you can travel just a few metres across a dam and be in a different time zone!’ Lewis thought to himself. 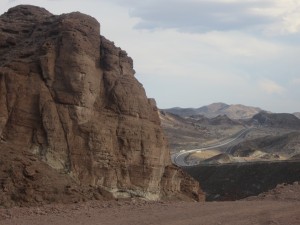 From above the dam, Lewis the Lion was able to absorb the desert landscape again and he could understand mam’s desire to tame the river in such a remote part of the world. The building of the Hoover Dam was indeed a great engineering achievement!

As you know, Lewis the Lion loves learning languages and so loves words and playing with words too. He noticed the the prefix ‘hydro‘ as in ‘hydro-electric‘ comes from the Greek word meaning ‘water.’

However, he also knows that the Latin word for water is ‘aqua.’

Many words in the English language derive from either Greek or Latin roots.

Lewis the Lion has a word challenge for you!

How many words in English can you find that start with the prefix ‘hydro’ or ‘aqua’?

Good luck! (Lewis the Lion’s top tip: use a good dictionary to help you!).

Helen Molloy has been a Primary Learning and Teaching Consultant, leading on the introduction of Primary Languages in the City of Stoke-on-Trent for the past 5 and a half years. She is passionate about language learning and inspiring children into developing a curiosity and awareness of other people's languages and cultures.
View all posts by Helen Molloy →
This entry was posted in Lewis' Blog and tagged Arizona, children's travel blog, educational travel blog for children, Hoover Dam, Lewis the Lion, Nevada. Bookmark the permalink.