Maths and the Mexican currency

Lewis the Lion discovered that the currency used in Mexico is the Mexican peso (often written as MXP for short).

Here is a picture of the notes and coins used in Mexico. 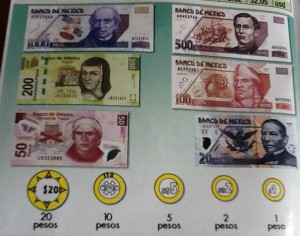 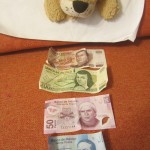 Lewis sees the front of some of the Mexican notes 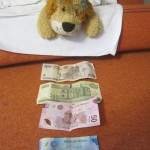 Lewis the Lion studies the back of the Mexican pesos notes 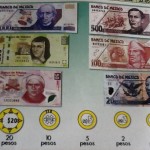 The conversion is this:

Lewis the Lion was quite happy therefore when he landed in Mexico as he realised that to work out the conversion he had to know his 5 times tables. That was always one of his favourite multiplication tables as he could simply multiply or divide a number by 10 and then half it.

Lewis the Lion discovered in particular that street food was quite cheap, e.g. A taco might cost 10 MXP or a quesadilla might cost 15 MXP.

Can you work out how much a typical lunch might cost for Lewis the Lion in pounds and pence?

Lewis the Lion also discovered that in Mexico often people were also willing to accept payment for certain things in American dollars. Sometimes it was worth considering what was better: to pay in Mexican pesos or American dollars?

However, one thing he realised that didn’t work out well for him was the fact that he didn’t exchange his Peruvian Nuevo Soles before he left Peru. He learnt the hard way because if he’d exchanged his money in Peru he would have received four-fifths of their value in exchange but by waiting to get to Mexico, he only got three-fifths in exchange! He therefore made a mental note to always exchange weaker currencies in their own countries or to make sure he didn’t get too much money out at the cash machine in the first place!

What strategies do you have to remember your five times tables?

Helen Molloy has been a Primary Learning and Teaching Consultant, leading on the introduction of Primary Languages in the City of Stoke-on-Trent for the past 5 and a half years. She is passionate about language learning and inspiring children into developing a curiosity and awareness of other people's languages and cultures.
View all posts by Helen Molloy →
This entry was posted in Lewis' Blog and tagged children's travel blog, currency, educational travel blog for children, exchange, for kids, Lewis the Lion, Mexican peso, money, travel blog, travel blog to inspire kids, travel stories to inspire children, travel writing for children. Bookmark the permalink.