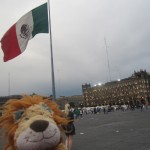 The colossal Mexican flag flaps in the middle of the Zócalo 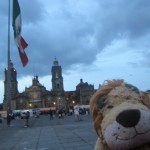 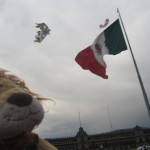 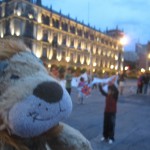 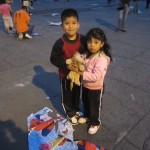 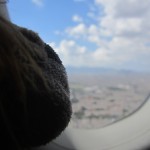 Lewis sees the huge Zocalo from the sky 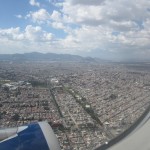 The Zocalo, at the centre of Mexico City, can be seen from the sky 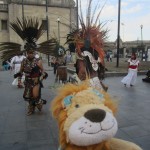 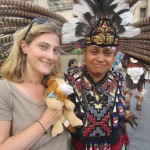 Lewis and Helen are impressed by the Aztec costume 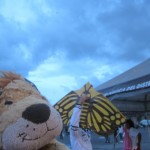 So, it was funny to think that just a few days before, Lewis the Lion had been on the remotest island on the planet, Easter Island but here he was now in the world’s most populated city and Mexico’s capital, Mexico City. The estimated population is 20 million: that’s roughly three times the population of London! Lewis the Lion hadn’t really appreciated what a big country Mexico is but he learnt that this horn-shaped country is eight times the size of the UK and is a quarter of the size of the USA.

He was really excited to be here for one principle reason: he had always enjoyed learning about the Aztecs in school and he knew that today’s modern day Mexico City (or La Ciudad de Mexico as it is called in Spanish) was built on top of the former Aztec centre: Tenochtitlan. He was therefore eager to learn more and see things for himself. He therefore booked himself into a hostel right in the heart of the city, Hostel Amigo Suites where he was only two streets away from Mexico’s main square, the Zócalo. This special square – the Zócalo – is one of the biggest squares in the world, after Tiananmen Square in Beijing, China and Red Square in Moscow, Russia.

So, along with Helen and Susan, he took a little stroll one Sunday evening into the centre of Mexico City and stumbled across a sight that filled his heart with joy: hundreds of children flying kites! It was not what he had anticipated at all but what a wonderful sight it was.

Click here to see children flying their kites in the Zócalo.

Lewis the Lion again realised that children the world over are not so different. Here the children had kites with familiar cartoon characters: Spiderman, Ben 10, Peppa Pig, Disney Princesses and Sponge Bob Square Pants, as well as pretty butterfly and flower kites. It just seemed the perfect place to fly a kite as not only was there was so much space but the wind was up which was great for catching the kites, helping them to soar high.

He wondered what the Aztecs would have thought about such a sight if they had been alive to see it? It was strange to think that once upon a time this enormous square would have had an enormous central pyramid temple which was used for human sacrifices. What a contrast! Now there was an enormous Mexican flag billowing in the breeze and the square was flanked by important looking buildings such as the huge cathedral. (Lewis will talk more about that in another blog).

The Zócalo also seemed to be a hive of cultural activity as another time Lewis the Lion saw a huge platform set up where children and parents were watching a puppet show. There were also performers dressed as traditional Aztecs who danced for the crowds. You can see a snippet here.

It also was a place for political activity as Lewis the Lion saw various campaigns around its edges.

However, apart from the Aztec performers, he didn’t see too much evidence of the former Aztec culture? He discovered that was because when the Spanish conquistadors arrived in the Sixteenth Century, they pulled many of the Aztec buildings down (especially the Aztec places of worship) and used the bricks to rebuild churches on top of them instead. However, he still wanted to investigate further as he didn’t believe that that was the end to the story. Would he find out more information about the lost Aztec culture? Read his next blogs to find out!

If you were to design your perfect kite, what design would it have on it? How would you make sure that it was the right shape to catch the wind and stay up in the air for as long as possible? How long would you want the string to be?

Helen Molloy has been a Primary Learning and Teaching Consultant, leading on the introduction of Primary Languages in the City of Stoke-on-Trent for the past 5 and a half years. She is passionate about language learning and inspiring children into developing a curiosity and awareness of other people's languages and cultures.
View all posts by Helen Molloy →
This entry was posted in Lewis' Blog and tagged children's travel blog, educational travel blog for children, for kids, kites, Lewis the Lion, Metropolitan Cathedral, Mexico, Mexico City, travel blog, travel blog to inspire kids, travel stories to inspire children, travel writing for children, Zócalo. Bookmark the permalink.