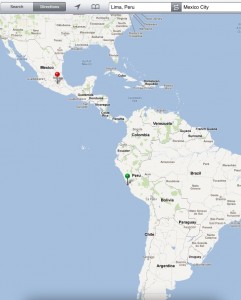 Lewis the Lion flies from Lima to Mexico City

The day had finally come. It was the first of August and Lewis the Lion knew it was time for the next stage of his worldwide adventure. He was bound for Mexico City in North America. (This in itself surprised Lewis the Lion as he’d always thought that Mexico was in Central America but he was wrong!). However, at least there was one thing that would remain the same for a bit: the Spanish language and Lewis the Lion was happy about that as it meant he had a little extra time to practise! Learning Spanish over the last five months hadn’t proved to be quite as successful as he might have hoped as he often found that the common language in hostels was English. Nonetheless, whenever possible, he would always try to use Spanish whilst in a Spanish speaking country, as quite simply he knew that the more practise you get, the better you get! Learning a language was a bit like learning a musical instrument in that respect.

Lewis the Lion felt a bit bad that he hadn’t managed to visit some countries and friends living in some of the northern countries of South America or any of the countries in Central America but as he’d already rationalised before, hopefully there would be another opportunity in the future.

So, Lewis the Lion and Helen flew out of one capital city into another: from Lima, Peru to Mexico City, Mexico. Whilst he was waiting to board the plane, he reflected on his adventures in South America and felt truly blessed to have had the opportunity to travel there. He had had wonderful experiences, had seen perhaps some of the most dramatic scenery that he had ever seen in his life and most importantly had met some amazing and inspiring people. What a lucky lion indeed!

He hoped that the next stage of his journey to Mexico and the USA would be equally successful and he will look forward to telling you about the rest of his adventures there. 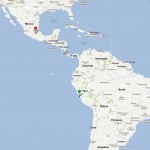 Lewis the Lion flies from Lima to Mexico City 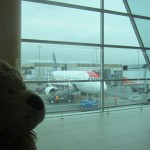 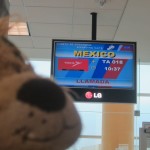 Lewis waits to board his flight to Mexico 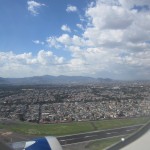 Lewis the Lion sees a sign welcoming him to Mexico 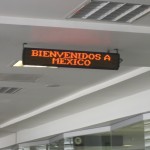 Bienvenidos a Mexico – Welcome to Mexico

What has happened to you recently that has made you truly grateful?

Tell your friend about it!

Helen Molloy has been a Primary Learning and Teaching Consultant, leading on the introduction of Primary Languages in the City of Stoke-on-Trent for the past 5 and a half years. She is passionate about language learning and inspiring children into developing a curiosity and awareness of other people's languages and cultures.
View all posts by Helen Molloy →
This entry was posted in Lewis' Blog and tagged children's travel blog, educational travel blog for children, for kids, Lewis the Lion, Mexico, North America, Peru, South America, Spanish, travel blog, travel blog to inspire kids, travel stories to inspire children, travel writing for children. Bookmark the permalink.