Lewis the Lion gets his first wash

As you already know from some of Lewis the Lion’s previous stories, lions are cats and aren’t great fans of water. As it was though, Lewis had now been travelling around with Helen for six months now and was looking decidedly scruffy. Compare these two photos of before and after Lewis the Lion’s adventure: 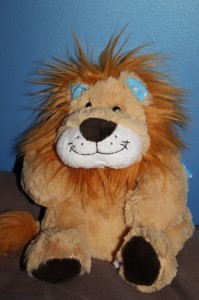 Lewis the Lio before he started his world adventure 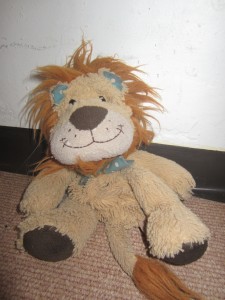 It was no wonder really when he considered all of the things he had been up to! So, Helen decided that there was nothing else for it, he would have to get a wash! Lewis the Lion growled in disapproval. ‘Did he really have to get a wash?’ he moaned. ‘Yes.’ answered Helen in her teacher voice. Lewis the Lion knew he didn’t have a choice in the matter so he sighed as he realised that he would just have to succumb to it. 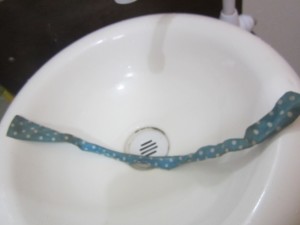 Lewis the Lion’s neckerchief is filthy

Helen at least had the grace to start with washing his blue, white spotted neckerchief as Lewis the Lion watched on. She lathered it up with soap and rinsed it clean (well cleanish!) under the water. 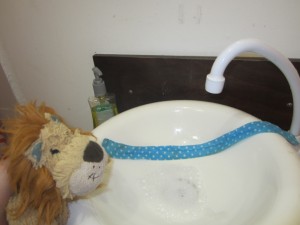 It was Lewis the Lion’s turn next and she started with the worst part: his face. Lewis the Lion hated having his face scrubbed and pummelled as Helen tried to get six month’s of dirt out. He caught his breath as she rinsed him off under a jet of cold water.

Lewis the Lion gets wet

Thank goodness the worst part was over first and as Lewis caught a glance of himself in the mirror, he felt rather pleased to see the white on his chin shining through again. 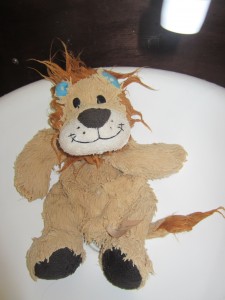 Lewis the Lion has been washed with soap

Next came his paws, his belly, his back and his tail. Lewis was just glad this didn’t happen very often! 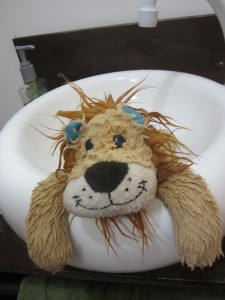 Lewis the Lion is wet but clean!

Helen tried to be as quick as possible so he could relax and dry off in the Mexican sunshine on the rooftop terrace. 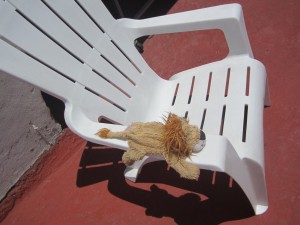 Lewis dries his back on the rooftop terrace 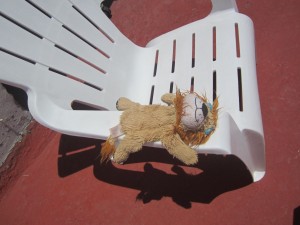 Lewis turns over to dry his front

He was very happy when it was all done and dusted…but that wasn’t quite true. Luckily, for Lewis in his same hostel was a girl called Susan who loved looking after animals. She said that now Lewis the Lion was clean and you could see the sparkle in his golden fur again, he really needed to have his fur brushed out. 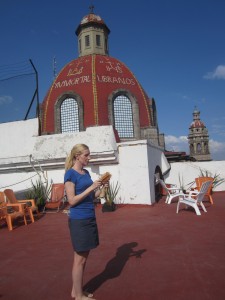 So, she delicately and lovingly brushed out his fur till he almost like brand new again. 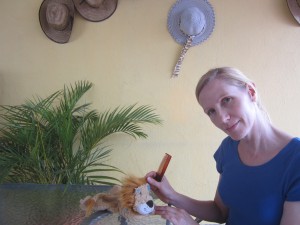 Susan gently brushes out all of Lewis’ fur

Lewis the Lion felt rather proud of his new look: it made him feel like his old self again. Even though he hated water, he realised that Helen was right and keeping yourself clean was very important. In fact, he felt so good that he even was happy to have his photo taken with a Mexican policeman!

A clean Lewis poses with Helen and a Mexican policeman

Why is it important that we keep ourselves clean on a regular basis (and that we wash our hands well every time we go to the toilet)?

Helen Molloy has been a Primary Learning and Teaching Consultant, leading on the introduction of Primary Languages in the City of Stoke-on-Trent for the past 5 and a half years. She is passionate about language learning and inspiring children into developing a curiosity and awareness of other people's languages and cultures.
View all posts by Helen Molloy →
This entry was posted in Lewis' Blog and tagged children's travel blog, educational travel blog for children, for kids, Lewis the Lion, personal hygiene, travel blog, travel blog to inspire kids, travel stories to inspire children, travel writing for children. Bookmark the permalink.