Lewis has a long, long bus journey to Ecuador

So after recovering in Cusco for a few days after his epic adventure to Machu Picchu, Lewis the Lion felt ready to move on to see if he could tick off another one of his travel dreams from his list. He wanted to see if he could visit the wildlife paradise of the Galapagos Islands but in order to do that he would first have to travel to Guayaquil in Ecuador. He knew that this would be a very long journey!

Unlike in Europe, Asia or North America, there are no cheap airlines between countries in South America and so the normal mode of transport is by coach or bus. So, Lewis the Lion knew that his first part of his journey would have to take him through the country’s capital city, Lima.

The overnight bus to Lima from Cusco was another posh affair, with blankets, meals and a reclining ‘cama’ bed-like seat with a foot-rest. For the first time ever, Lewis was in a coach that even had wifi, albeit intermittent! 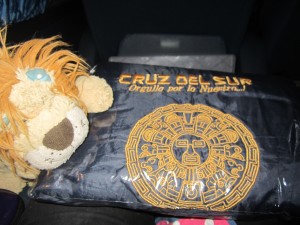 Cruz del Sur – one of the poshest coaches on Lewis’ adventure

Well, the ticket did cost him 168 Nuevo soles so he hoped it would be half decent. (Approximately £40). There were a couple of films shown before the lights went out on the bus and the curtains were drawn.

The bus journey took a whopping 20 and a half hours, leaving at 6 pm and not arriving in Lima till 2:30 pm the next day! To pass the time, Lewis the Lion made sure he rested a lot and wrote some ideas down for his stories. They were given a simple breakfast of a ham roll, and an apple with a chocolate flavoured milk shake but he felt ready for his lunch by the time he got to Lima!

The first thing that Lewis the Lion and Helen did when they arrived at the coach station was to see when they could next travel to Ecuador. A flight was out of the question as they were extortionate but there was a coach to Guayaquil leaving the next day for 196 soles.

Can you remember how to convert that into pounds?

So, without further thought a ticket was purchased for the next day, with Lewis the Lion not really appreciating what sort of a journey lay ahead of him…

When Lewis the Lion arrived at the coach station at 2pm, his luggage was checked in (rather like at the airport and it couldn’t weigh more than 20kg) and he was given a receipt for it. This time he was in a semi-cama seat: a seat that only reclines partially. As it was during the day though, Lewis the Lion didn’t mind as it meant that he could watch out of the window at the passing landscapes. Leaving the centre of Lima, he could see many grand churches and elegant buildings but as they got further out of town, he could see what looked like shanty towns and it reminded him of his visit to Roçinha in Brazil. 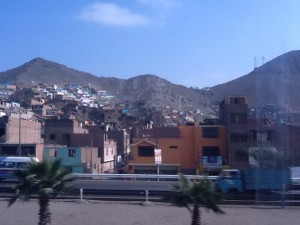 Lewis sees the shanty towns as he leaves Lima

There was a lovely little girl who kept Lewis the Lion entertained for a few hours who wanted to sit next to him, so they chatted in Spanish, she looked at Lewis’ photos and played cards. She even took a few photos of Lewis the Lion which Lewis thought was very clever considering she was only 3 years old!

Like on the long bus journey from Cusco, Lewis the Lion tried to rest as much as possible: it was funny how a bus journey could tire you out even when you weren’t doing much!

Has that ever happened to you on a long journey?

The coach journey seemed to go on for ever, passing villages, sandy planes 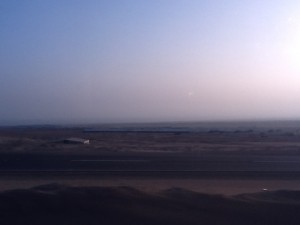 and through rocky quarries until eventually, it hugged the line of the coast and Lewis the Lion grinned to himself as he realised he was looking out onto the Pacific Ocean. Never did he ever believe that he would have been able to travel so far from home! What a lucky little lion! 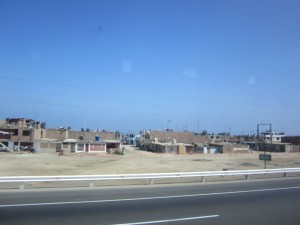 Lewis gets excited as he can see the Pacific Ocean from the coach window!

The bus journeyed through the night until eventually the next day, about 24 hours after it had set off, they reached the Peruvian exit point and the Ecuadorian border. It seemed like all the staff on the Ecuador side must have been having their lunch as there was no-one to check the passengers through the border! Luckily for Lewis the Lion, he’d made a friend, Deivy, from Colombia who bought him an ice cream on this hot, sunny day. It was just as well because he was starving as they hadn’t been served lunch yet on the coach and it wasn’t until after 4 pm when he eventually got something to eat.

The weather had definitely seemed to have changed as they had headed north. Up by the Ecuadorian border, there was the sense of the tropical. It was hot and humid and as the bus continued on Lewis the Lion could see roadside banana plantations and palm trees with chickens running around. He was reminded of the time he had gone into the Bolivian rainforest.

By half past eight, the coach pulled into the station at Guayaquil: a full thirty hours after it had first departed from Lima. What a long, long, journey! Lewis the Lion thought that it was perhaps the longest journey on a coach that he had ever made in his little life. He worked out that from Cusco, Peru to Guayaquil, Ecuador, it was more than 1,500 miles. What a journey indeed!

What’s the longest journey that you’ve ever made?

Where was it to?

Did you think it was it worth it?

Why or why not?

Helen Molloy has been a Primary Learning and Teaching Consultant, leading on the introduction of Primary Languages in the City of Stoke-on-Trent for the past 5 and a half years. She is passionate about language learning and inspiring children into developing a curiosity and awareness of other people's languages and cultures.
View all posts by Helen Molloy →
This entry was posted in Lewis' Blog and tagged children's travel blog, Ecuador, educational travel blog for children, for kids, journey, Lewis the Lion, Peru, travel blog, travel blog to inspire kids, travel stories to inspire children, travel writing for children. Bookmark the permalink.