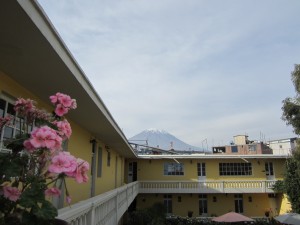 A clearly visible volcano from the hostel

The next morning in Arequipa, Lewis the Lion awoke in the fabulous Casa de Avila hostel from which he had a superb view of the local cone-shaped volcano, El Misti. He felt right at home there, especially as at the entrance were some friendly lion seats! 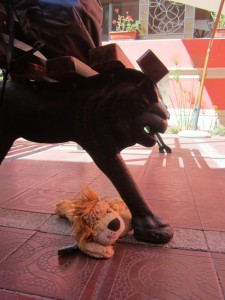 After breakfast, he was then introduced to one of his hostel’s long term residents: a forty year old to be precise and someone who was much older than even Helen! 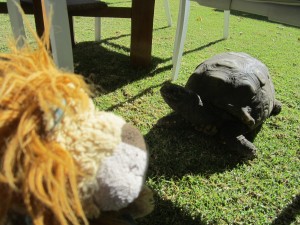 It was a tortoise who seemed to be intrigued by Helen’s trainers. 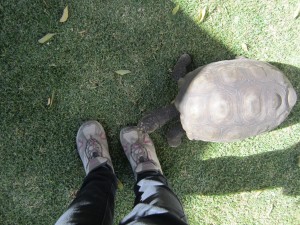 The tortoise is fascinated by trainers!

Lewis thought that it was a really beautiful creature and was surprised how quickly it could move (especially chasing Helen’s trainers) as he’d always thought tortoises were meant to be slow. 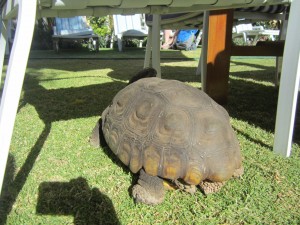 Lewis admires the patterns on the tortoise’s shell

After meeting the tortoise, he then went on a little wander into the city centre of Arequipa. What a pleasant surprise met his eyes! 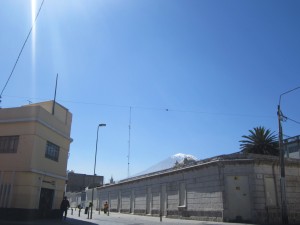 You can see the volcano from the city streets

He hadn’t expected it to be so beautiful with its colonial style buildings and general feel of grandness about the place. Like in a lot of cities in South America, it’s main square is called Plaza de Armas and Lewis the Lion noticed many people enjoying the surroundings as well. 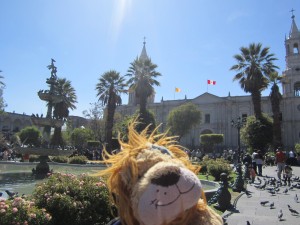 There was a central fountain with people selling bird seed and Lewis could see many children feeding and chasing pigeons. 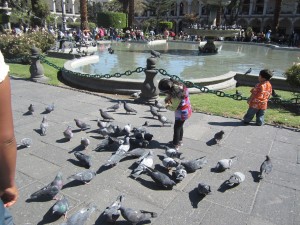 Children feed the pigeons by the fountains

He chuckled to himself as he thought how wonderful it was to see children all over the world enjoying the same thing! 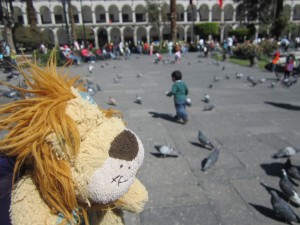 Lewis notices that children the world over love chasing pigeons

Have you ever chased pigeons? How did it make you feel?

The square on three sides is surrounded by buildings with sheltered arcades and on the fourth side by an enormous cathedral. 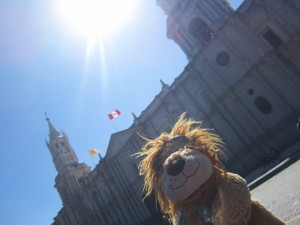 It was no wonder really as Arequipa was well-known as a religious centre and indeed had a huge convent which Lewis the Lion will talk about in his next blog.

As it happened, Lewis the Lion was in the city on one of the big Catholic feast days: the feast of Saint Peter and Saint Paul.

What do you know about the Christian Saints, St Peter and St Paul?

Click here to find out more about St Peter and St Paul.

He was therefore able to see a packed cathedral with all sorts of dignitaries, a full choir and many priests concelebrating the mass, including the bishop himself. 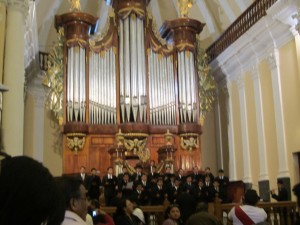 The cathedral organ and choir

The whole mass was even being filmed it was so important! Like in so many churches he had already seen in Bolivia and now in Peru, many of the statues have a mix of indigenous qualities, especially in the way that they are decorated. 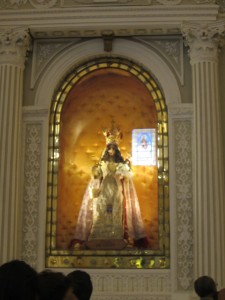 Back out in la Plaza de Armas, Lewis the Lion noticed the wonderful cone-shaped, dormant volcano, El Misti which loomed 5821 meters majestically above the city. 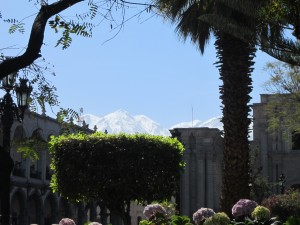 The volcanoes can be seen from La Plaza de Armas

He would understand a little bit more about its importance to the Inca culture in the coming days, especially when he learned about the story of Juanita. Look out for one of his next blogs on the frozen human sacrifice.

He would also discover how wonderful the nearby countryside was when he visited the Colca Canyon. Again he’ll look forward to telling you all about it in one of his next blogs.

Helen Molloy has been a Primary Learning and Teaching Consultant, leading on the introduction of Primary Languages in the City of Stoke-on-Trent for the past 5 and a half years. She is passionate about language learning and inspiring children into developing a curiosity and awareness of other people's languages and cultures.
View all posts by Helen Molloy →
This entry was posted in Lewis' Blog and tagged Arequipa, children's travel blog, educational travel blog for children, for kids, Juanita, Lewis the Lion, Peru, Santa Catalina Convent, the Andes, travel blog, travel blog to inspire kids, travel stories to inspire children, travel writing for children. Bookmark the permalink.