Lewis the Lion woke up early one morning to travel to yet another South American country: Peru. Of course, Lake Titicaca was divided between the two countries of Bolivia and Peru and Lewis was now keen to discover what the Peruvian side of the lake had to offer.

So from the town of Copacabana, Lewis boarded the coach for Peru. 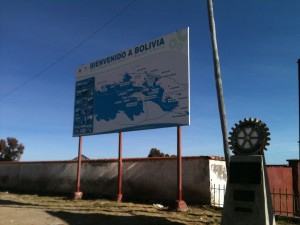 A welcome into Bolivia

Within a short time, the coach had stopped at the Bolivian exit point. 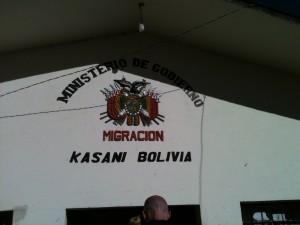 Helen had to stand in a queue ready with her passport and the slip of paper she was given when she entered the country. It is very important that you look after this immigration paper in South America or otherwise you may have difficulty moving between countries and have to pay a heavy fine. 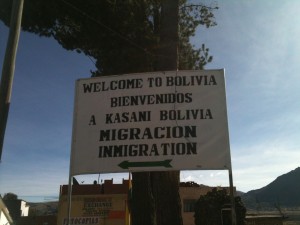 The Bolivian and Peruvian immigration offices are very close

After she had received her Bolivian exit stamp she had to do something she hadn’t done yet in South America. She had to physically walk across the border (with Lewis the Lion in her pocket naturally!) and go to the Peruvian immigration office. 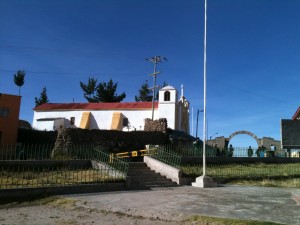 Lewis walks through the archway into Peru

There she had her passport stamped and received another important slip of paper. 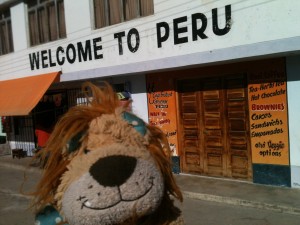 A welcome to Peru! 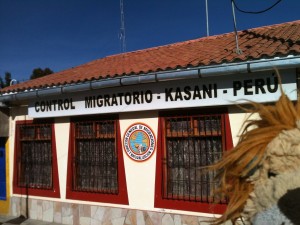 Passports need to be stamped to enter Peru

At the border, it was evident that Peru is also a Catholic country as a statue dedicated to Mary, the mother of Jesus was also in a case right by the immigration office. 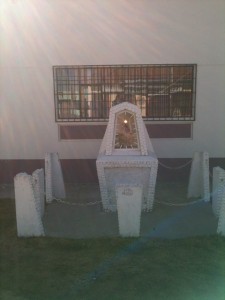 A statue of Our Lady outside the Peruvian Immigration Office

It seemed strange that by even walking 10 metres across the border that Helen needed to change the time on her watch. That’s because it’s one hour behind Bolivia in Peru (or 6 hours behind GMT). Luckily however, the time on her phone changed automatically due to its inbuilt GPS and then it immediately buzzed with messages from her mobile phone network welcoming her to Peru! Have you ever notice that happen with mobile phones if you have travelled abroad?

The coach then caught up with its passengers in Peru but whilst it waited for all the passengers to pass through passport controls, Lewis the Lion and Helen exchanged some small change. For 45 Bolivianos, they got 16 Nuevo Soles, the currency in Peru.

Can you work out how much a nuevo sol is worth in pound sterling? (Watch out for Lewis the Lion’s forthcoming blog on the Peruvian currency). 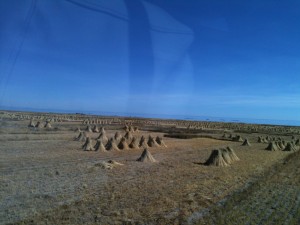 As the coach then continued its journey, Lewis the Lion was surprised how much the landscape changed so suddenly now that he was in Peru. Even though the bus was still riding along the Lake Titicaca shoreline, he could see lots of triangular shaped straw bundles, lined up like rows of hats! It reminded him of the story of the Three Little Pigs where one of the little pigs built his house out of straw! (He would later go on to discover the importance of this straw like plant – the totora reed- when he visited the Uros Islands. See one of his next blogs on some strange Floating Islands!). 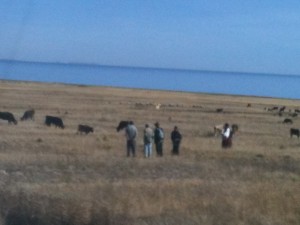 Farmers working the fields on the Peruvian side of Lake Titicaca

Through the coach window, he could see farm animals peppering the fields of the flat land running alongside the lake. He even saw one woman doing her washing in a running stream. 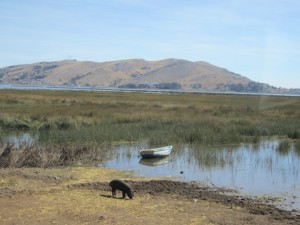 A pig grazes by the water’s edge

He chuckled to himself as he saw about 10 people crammed into a car, the boot included! The rules on health and safety here were clearly not enforced. Likewise, many houses and buildings seemed half finished or under construction, with wires and girders jutting out. 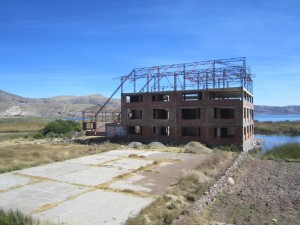 Lots of construction work is going on

As Lewis the Lion arrived at the lakeside city of Puno, he noticed that like in Bolivia, there were still Aymara women dressed in traditional clothes with bowler hats and layered skirts. There were also many shops selling traditional textiles and tapestries. 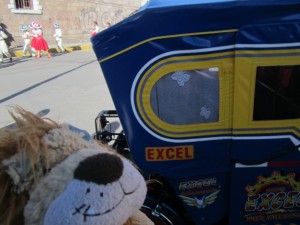 On the streets were many motor-taxis, although most of them weren’t moving very far on this particular day. As luck would have it, Lewis had arrived in town on a day when all the schools had a fancy-dress parade around all the streets. What a lucky lion!

Here are some photos of what he saw and here is a short video clip too. 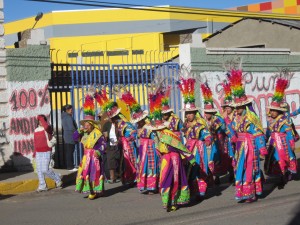 Dancing on the streets of Puno 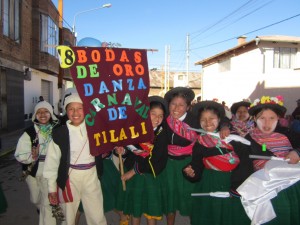 School children parade through the streets 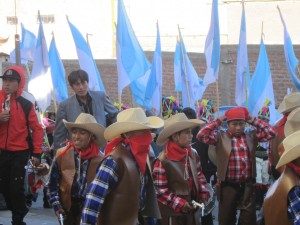 As he soaked up the party atmosphere on the streets, his journey took him to a decorated archway and then he had a sense of the familiar: a local bus drove by and it reminded him of the buses back in Bolivia with people calling out for passengers along the way. 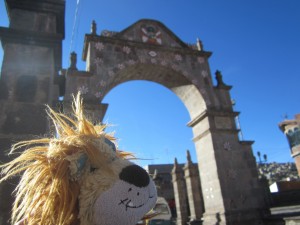 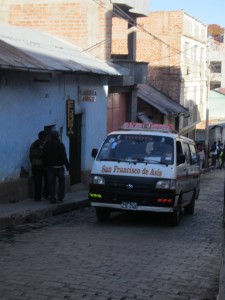 That afternoon, he went on a special trip to the market but he will tell you more about that in his story about his homestay on Amanatani Island. 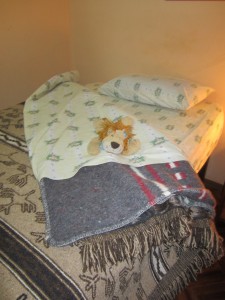 Lewis has lots of warm blankets for the cold night

That evening, Lewis the Lion shivered. Like most of his time in Bolivia, the days were warm but the evenings were very cold and thankfully, he had lots of thick, heavy blankets to keep him warm at night. He would make the most of it as he didn’t know quite what to expect on his next adventure to some of the Peruvian islands?

Have you ever performed in public before, e.g. with your class or school?
How did you feel?

Helen Molloy has been a Primary Learning and Teaching Consultant, leading on the introduction of Primary Languages in the City of Stoke-on-Trent for the past 5 and a half years. She is passionate about language learning and inspiring children into developing a curiosity and awareness of other people's languages and cultures.
View all posts by Helen Molloy →
This entry was posted in Lewis' Blog and tagged Bolivia, border, children's travel blog, Copacabana, educational travel blog for children, for kids, Lake Titicaca, Lewis the Lion, Peru, Puno, travel blog, travel blog to inspire kids, travel stories to inspire children, travel writing for children. Bookmark the permalink.