Lewis learns the importance of his 4 times tables! 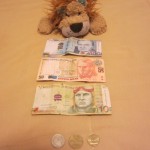 Lewis sees the main notes and coins in the Peruvian currency 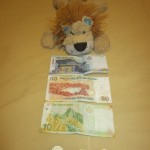 Lewis the Lion was starting to realise how important so many of the things were that he had learnt in school. In particular, he was starting to understand how important it was to know all of his table facts off by heart as he travelled around. When he arrived in Peru, he understood why he had to know his four times tables off by heart as in the Peruvian currency, there are roughly 4 Nuevo Soles (Sol in the singular) to the pound.

See if you can work out how much Lewis the Lion spent in pounds when he talks about the different amounts he has paid as he tells his stories.

A strategy that Lewis uses to work out his four times table is to times by two and then double it again.

Do you have a strategy that helps you remember your four times table?

Helen Molloy has been a Primary Learning and Teaching Consultant, leading on the introduction of Primary Languages in the City of Stoke-on-Trent for the past 5 and a half years. She is passionate about language learning and inspiring children into developing a curiosity and awareness of other people's languages and cultures.
View all posts by Helen Molloy →
This entry was posted in Lewis' Blog and tagged 4 times tables, centavos, children's travel blog, currency, educational travel blog for children, for kids, Lewis the Lion, money, Nuevo Sol, Peru, soles, travel blog, travel blog to inspire kids, travel stories to inspire children, travel writing for children. Bookmark the permalink.