Lewis learns about life in a convent 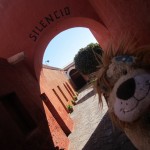 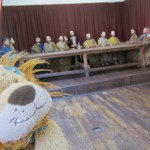 Lewis sees a depiction of The Last Supper 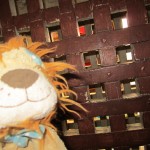 A double grid to the outside world 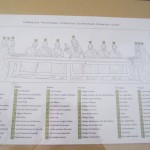 The names of the apostles in different languages 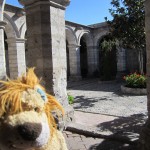 Lewis in the cloisters 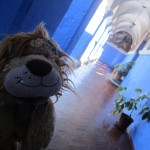 The cloisters are painted beautifully 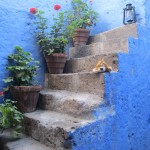 Lewis wants to see where the stairs lead to 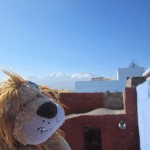 Lewis has a wonderful view of the Andes from the Convent 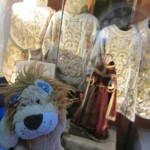 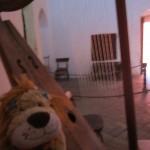 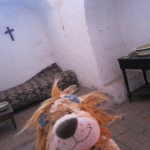 Lewis sees how basic the nuns’ cells are 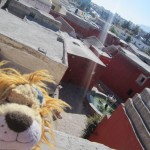 Lewis looks down on a central fountain 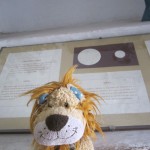 Lewis learns about the special hosts used during the Eucharist 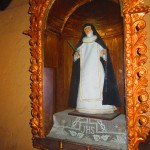 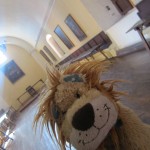 Lewis had already learned that Peru was a Catholic country but he soon discovered that Arequipa is an important religious centre with its cathedral, many churches and especially its huge convent. El Monasterio di Santa Catalina de Siena (or ‘Saint Catherine of Siena’s Convent’ in English) in the heart of Arequipa is the biggest convent that Lewis the Lion had ever visited. In fact it is so big that it is like a city within a city. A covent is a place where women decide to devote their lives to a religious way of life and serve God through prayer. In this particular convent, the women serve as cloistered nuns which means that they never return home to their homes and families and it has been this way since it was founded in 1579. Today, there are still 30 nuns that live there between the ages of 18 and 90 years old but they live in a part of the convent not accessible to the tourists and they worship in the main chapel outside of visiting hours.

The thing that struck Lewis the Lion the most about the convent, apart from its vastness, was the deep sense of spiritual calm that seemed to emanate from the high walls themselves. The impressive colonial structure of the convent includes lots of small rooms or private cells where the nuns can lead an isolated life of prayer, interspersed with brightly coloured cloisters which surround small squares. Also high in the arches of the cloisters are Christian paintings which inspire the nuns in their chosen way of life. He also learned that this particular order of nuns, the Dominican Mothers of Saint Catherine’s Convent, try to recognise the presence of God in the small events of everyday life and they also pray daily for all humankind.

One such nun, Sister Ana, who lived in St Catherine’s Convent until her death in 1686 was beatified in 1985 by Pope John Paul II. This was because the Catholic Church recognised her as a holy woman who performed various miracles. Her cell with its personal effects still exist in the convent showing visitors how she led her life.

The photo gallery above is of Lewis the Lion’s visit to the convent. He thought that it was a very beautiful and peaceful place to be and he admired the nuns for choosing this humble and noble lifestyle in the service of God.

Is there a special place that you visit which gives you a sense of calm and serenity? Where is it?

Helen Molloy has been a Primary Learning and Teaching Consultant, leading on the introduction of Primary Languages in the City of Stoke-on-Trent for the past 5 and a half years. She is passionate about language learning and inspiring children into developing a curiosity and awareness of other people's languages and cultures.
View all posts by Helen Molloy →
This entry was posted in Lewis' Blog and tagged Arequipa, Catholic, children's travel blog, educational travel blog for children, for kids, Lewis the Lion, nuns, religious life, Santa Catalina Convent, travel blog, travel blog to inspire kids, travel stories to inspire children, travel writing for children. Bookmark the permalink.