Did you know that cats aren’t very good with water? Well that’s precisely what happened to Lewis the Lion when he caught the boat early in the morning from Amantani bound for Taquile.

He’d had the freshest, saltiest egg sandwich ever for his breakfast, with eggs found in the garden. He giggled with Juan’s sister saying that this was the typical food he would eat back home in England at the weekend. He then had said thank you and goodbye to his amazing host family for being so welcoming and sharing their lives with him. He’d even learnt some Quechua from Juan’s brother and in return had left his LED light with him. (Check out his page on Aymara and Quechua to learn more).

They were told to be at the boat for 8:30 am sharp because otherwise the tide would be high and it would be difficult to leave the island. But oh dear, Lewis and his friends were running late in true South American style! That meant that the boat was very rocky indeed as it set sail from the picturesque island of Amantani. Lewis the Lion really wished they had been there on time as he was feeling very sea-sick. Forty minutes later when the group arrived on the pretty island of Taquile, he decided to rest up and asked Helen to tell him about what she saw and to take some pictures for him. He was a bit upset to be missing out as he knew that Taquile is an island of weavers and farmers.

Helen said the most charming thing about this island, apart from the stunning scenery, were all of the men with their long, bobbled hats. She said that it looked like lots of ‘Wee Willie Winkies running through the town!’

Do you know that nursery rhyme?

Interestingly, she learnt that the different weave and colours of the hats denotes whether the men are single, married or in a position of authority. She also learnt that single women cover their heads with a veil and when they get engaged, they weave their hair into a band for their fiance!

Here are some of the photos she took of the day: 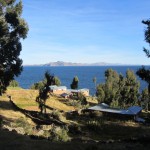 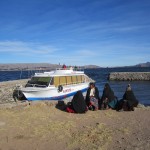 The community of Amantani say goodbye to their guests 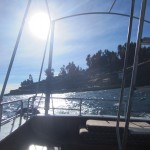 Lewis starts to feel sea-sick on the choppy waters 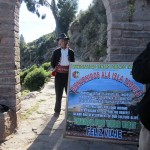 Welcome to the Island of Taquile 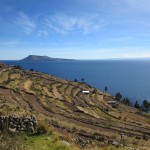 A view from Taquile 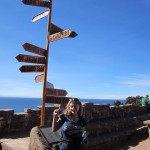 Kilometres to cities around the world 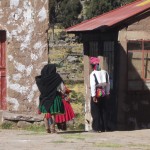 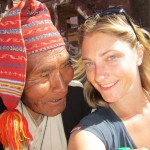 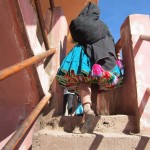 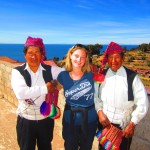 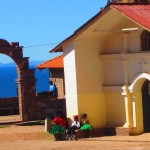 Locals hang out near the church 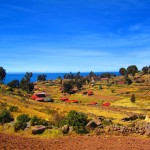 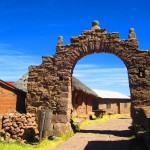 A typical archway on the island of Taquile 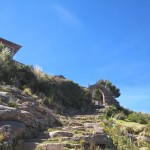 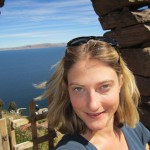 Helen stands in an archway 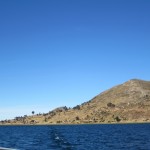 Sailing away from the pretty island of Taquile 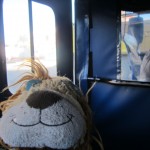 Lewis rides for the first time in a motor-taxi

The group walked right across to the other side of the island and down 530 steps before catching the boat back to Puno which took 3 hours. Lewis the Lion was thankfully, feeling much better by this point and was grateful to get back to terra firma.

Even if he’d missed out on seeing the island if Taquile, one little treat still awaited him later that evening. He travelled to the coach station using a motor-taxi for the first time in his life for a very reasonable 3 soles. There wasn’t much room in the back of it what with Helen’s big rucksack, and the seats were hard but nonetheless, Lewis the Lion thought it was a fun way to travel with the air rushing through it.

After paying the bus station tax, the pair then sat on a coach for 7 and a half hours to the elegant city of Arequipa. Lewis will look forward to telling you of his adventures there in his next blog.

Have you ever missed out on something fun because you were sick?

How did it make you feel?

How did you try to see the bright side?

Helen Molloy has been a Primary Learning and Teaching Consultant, leading on the introduction of Primary Languages in the City of Stoke-on-Trent for the past 5 and a half years. She is passionate about language learning and inspiring children into developing a curiosity and awareness of other people's languages and cultures.
View all posts by Helen Molloy →
This entry was posted in Lewis' Blog and tagged boat, children's travel blog, educational travel blog for children, farmers, for kids, Lake Titicaca, Lewis the Lion, Peru, Puno, Taquile, travel blog, travel blog to inspire kids, travel stories to inspire children, travel writing for children, weavers. Bookmark the permalink.