Lewis explores Cusco, the city of the Incas

Lewis the Lion had travelled on a really luxurious overnight coach, Cruz del Sur, when he journeyed from Arequipa where they gave you pillows, a warm blanket and plenty of films to watch! He arrived in Cusco early in the morning and the city seemed to positively glow under the soft light of dawn with its red-tiled roofs and white-washed streets. The Incas had called this city the ‘navel of the world’ and Lewis the Lion could understand why; it certainly had a buzz about the place with the sound of many languages filling the air. Cusco is an important hub for Peru’s major tourist attraction nearby: the Inca ruins in the citadel of Machu Picchu. (Lewis the Lion will tell you all about his adventure of how he got there in his next blog!).

Even though Cusco was the capital for the Inca empire, the Spanish built their churches on top of the Inca temples and palaces when they came and conquered in the 15th Century. Nonetheless, there are still substantial Inca ruins in and around the centre. In particular, Lewis the Lion felt the Inca presence in the heart of the city as in the Plaza de Armas, a fountain had recently been replaced with a temporary instalment of a golden statue of a victorious Inca king. The 24th June is Cusco’s main Inca festival, the festival of Inti Raymi where they enact the worship of the sun god in grand, theatrical style. Unfortunately, Lewis the Lion missed the festival by a few days but thinking positively, it meant that he missed paying the high tourist prices and he could still appreciate the decorations that remained in the city in the following days. He certainly made the most of these as he decided to get a quick overview of the city by doing a city bus tour. Moreover, it was a delightfully sunny day so he made sure he was on the top deck to get a good look! The trip lasted for an hour and a half and cost 20 Nuevo Soles.

If you look at Lewis the Lion’s previous blog, can you work out how much that is roughly in pounds and pence?

The commentary on the tour bus was in both Spanish and English but Lewis the Lion actually preferred the Spanish as the English version wasn’t always clear and he had more difficulty in understanding it. He realised how useful it is to understand another language as he reasoned that just knowing English is not enough if you want to travel and enjoy yourself to the full.

The bus tour started off in the elegant, balconied Plaza de Armas in the centre of Cusco. This time Lewis the Lion was grateful to be sitting on the bus because if you walked into the square or under its sheltered awnings, you were sure to be bombarded by a multitude of people trying to sell tours, day trips, massages or manicures. Lewis the Lion felt happy to be lifted up out of it all for an hour or two!

Here is a photo gallery of the places he drove past on the bus, including: la Plaza de Armas; Plaza Regocijo; Iglesia de la Merced (the main Cathedral in Cusco); los Balcones Coloniales; Portal Colonial Mantas; Arco Santa Clara; Colegio de Ciencas; Iglesia San Francisco; and el Gran Qoricancha. As the bus climbed the Sacsayhuaman hill (famous for its Cristo Blanco – a smaller version of the Christ the Redeemer he had seen in Rio de Janeiro and also the ruins of the Inca sun god temple), he had a wonderful panoramic view of Cusco with the words ‘Viva Peru’ etched into the hillside, which was visible from within and outside of the city. 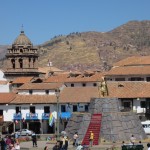 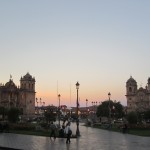 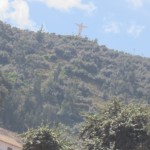 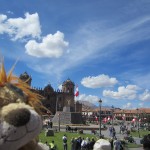 Lewis the Lion starts his tour in the Plaza de Armas 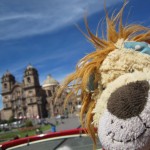 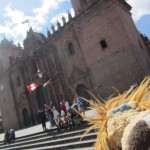 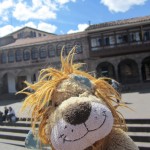 Lewis thinks the archways look elegant around the plaza 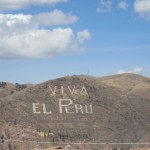 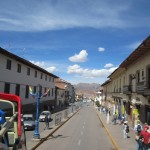 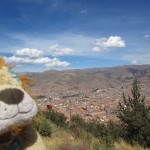 Lewis has a vantage point over the city of Cusco 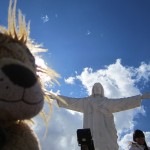 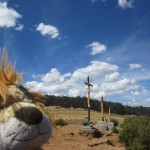 Three crosses on the Sacsayhuaman hillside 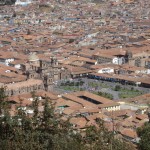 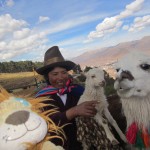 Lewis meets a llama, a sheep and a traditionally dressed Peruvian 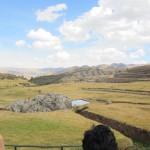 The Sacsayhuaman Fortress dedicated to the Inca Sun gods 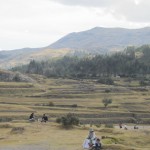 The ruins near the Sacsayhuaman Temple 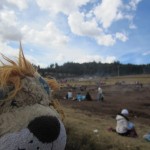 Family fun on the Sacsayhuaman hillside 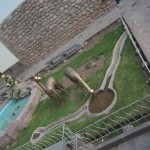 Golden llamas on the Calle Plateros 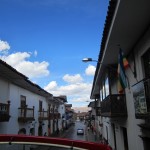 The good thing about a bus tour is it gives you an overview about what things you would like to see in more detail later on. One of the things that Lewis the Lion wanted to do was to visit the main cathedral in Cusco because his friend Dawn back in England had set him a challenge regarding a certain painting inside. The cathedral was in fact three churches in one and had more than 300 paintings in it and numerous small chapels. Nonetheless, it didn’t take long for Lewis to find the painting in question. It was a painting of the Last Supper of Jesus Christ, only it had a very Peruvian twist: added to the table was a guinea-pig! Lewis the Lion was surprised when he saw that but thought that the painting might have helped local people identify with the story a bit more.

He also find that there was a specially dedicated chapel to the Lord of Earthquakes (Chapel of El Señor de los Tremblores) and he thought of all the people in Peru who were affected by the local landscape.

Of all of Lewis the Lion’s adventures that you have read about so far, if you had the opportunity, which place would you like to spend an extended period of time in and why?

Helen Molloy has been a Primary Learning and Teaching Consultant, leading on the introduction of Primary Languages in the City of Stoke-on-Trent for the past 5 and a half years. She is passionate about language learning and inspiring children into developing a curiosity and awareness of other people's languages and cultures.
View all posts by Helen Molloy →
This entry was posted in Lewis' Blog and tagged children's travel blog, Cusco, educational travel blog for children, for kids, Incas, Lewis the Lion, Peru, religious site, Sacred Valley, travel blog, travel blog to inspire kids, travel stories to inspire children, travel writing for children. Bookmark the permalink.