Lewis arrives at the highest lake in the world, Lake Titicaca

Lewis the Lion was quite chuffed with the coach company he’d bought his bus ticket from. Not only was it a very reasonable price at 38 Bolivianos, but the coach even came to pick him up at his hostel! That had never happened before! With a quick stop at the coach station so the passengers could pay the tax (2 Bolivianos), the bus then left the city of La Paz, bound for the lakeside town of Copacabana. 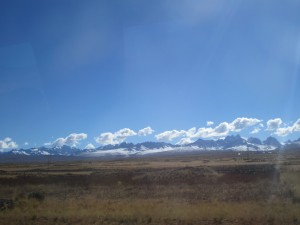 As the coach passed through small towns, Lewis the Lion admired the intervening countryside. Like a lot of South America which he had already visited, the line of the Andes was visible with its snow-capped mountains. However, he was in for another treat as within a couple of hours, he had glimpsed the majestic Lake Titicaca. The green, stepped terraces seemed to contrast with the deep blue of the lake. 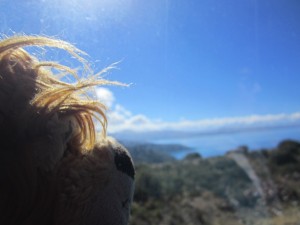 Lake Titicaca is no ordinary lake as it is in fact the biggest lake at altitude in the world. Bolivia seemed to be full of the ‘world’s highests!’ It is actually shared between the two countries of Bolivia and Peru and it has many islands (70 or so) of which la Isla del Sol (the Sun Island) and la Isla de la Luna (Moon Island) were very special for the Incas. (Lewis will learn more about the Incas over the coming weeks!). 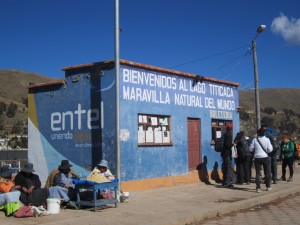 Welcome to Lake Titicaca, a natural wonder of the world

When Lewis the Lion arrived by the stretch of lake called Tiquina, the bus driver told the passengers to get off the bus and buy a boat ticket for 1.50 Bolivianos to the other side of the lake whilst leaving their luggage on the coach. Lewis the Lion did not feel that comfortable about that at first but he soon understood why. 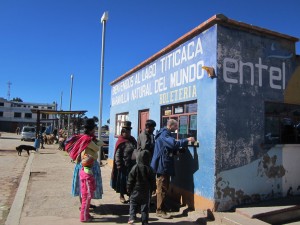 People queue for their tickets to cross Lake Titicaca

As Helen stood around talking to some of the other passengers in Italian and French, Lewis thought about how useful it is to be able to speak different languages when you travel. In fact it was just as well that Helen spoke French as she met a friend called Aurelie from France who ended up travelling with Lewis and Helen over the next few days.

Lewis the Lion with Helen and Aurelie

As the passengers waited for the boat to ferry them across the lake, Lewis loved to see the village life by the lakeside, including these llamas who seemed to impress the tourists. 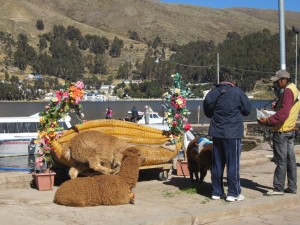 A traditional boat with llamas stand by Lake Titicaca 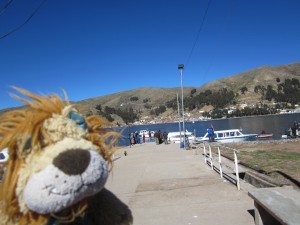 Lewis gets ready to board his first boat on Lake Titicaca

The motorboat was soon ready to take the waiting passengers across to the other side of the lake. At first it spluttered into life and gave off a lot of exhaust fumes which made Lewis the Lion cough but it soon was cruising along gracefully towards the opposite shore. 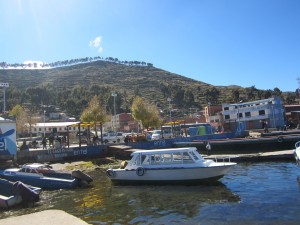 It was then that Lewis the Lion understood about the coach. He could see it also being ferried across the lake to the other side. He had never seen anything like it in his little life! How interesting! 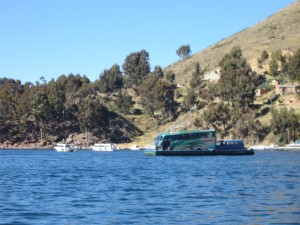 Lewis is amazed to see his coach crossing the lake too!

He then took some time to enjoy the sunshine, the ride and the picturesque beauty of Lake Titicaca as you can see from these pictures. 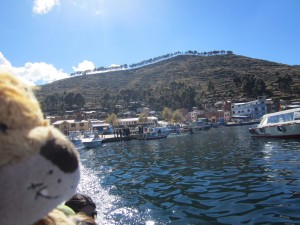 Lewis the Lion looks back across the lake from the motorboat 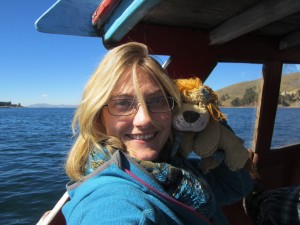 Within five minutes, the motorboat had reached the opposite side of the lake and Lewis the Lion thought it was quite charming to see the fishermen taking a quick break together in their boats.

Lewis sees the fishermen having a break in their boats

On the other side of the lake, Lewis the Lion was also greeted by a colourful statue of an Inca leader with his arms thrown skyward. Lewis was intrigued to know why the Incas had been so important in this part of the world? 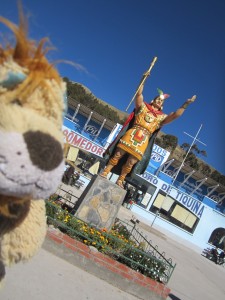 A statue of the Inca king greets Lewis the Lion

Lewis also enjoyed seeing the traders selling their goods from colourful shawls splayed out by the roadside. 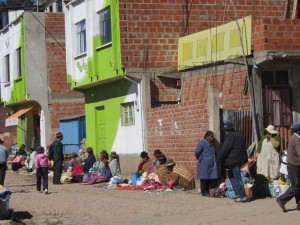 Traders splay their wares out on blankets

However, it wasn’t long before the passengers were back on the bus and admiring the views of Lake Titicaca. Lewis the Lion wasn’t the only one with his camera out, that’s for sure! 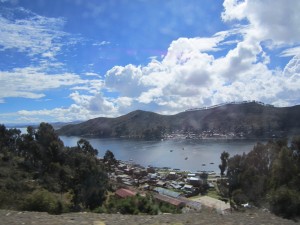 Lewis marvels at the view from the coach window

Within another hour or so, the coach had reached the charming lakeside town of Copacabana. (Lewis the Lion will explain more abut its importance in his next blog). 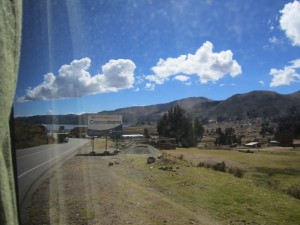 A tour guide alighted the coach to tell the passengers about a special deal that a local hotel, el hotel Mirador, was offering for its guests. You could have your own private room and bathroom, including wifi for just 50 Bolivianos a night! At such a special rate which was even cheaper than most of the hostels that Lewis was used to staying in, Helen decided to treat themselves for a change and they weren’t disappointed! 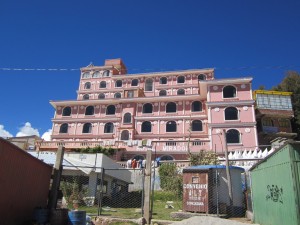 Lewis the Lion looks up at the Hotel Mirador

The hotel room even had a view looking over the bay. Lewis the Lion felt very relaxed there and lucky to be experiencing a bit of luxury on his travels! 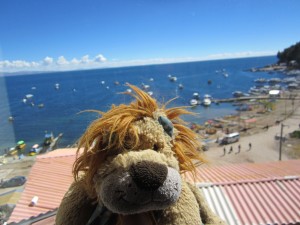 The view from Lewis’ hotel room – what a treat!

After settling in to the hotel room, the friends decided to go and try out some of the local speciality: fresh trout from the lake. 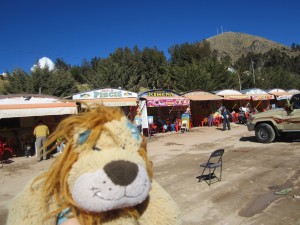 Along the shoreline were many restaurants offering a meal of the day, usually including a vegetable soup, followed by a full trout, chips, rice and salad, and all finished off with a banana and chocolate pudding. The standard price was 20 Bolivianos and yet again, Lewis the Lion couldn’t believe how cheap this was. He was starting to love this place already! 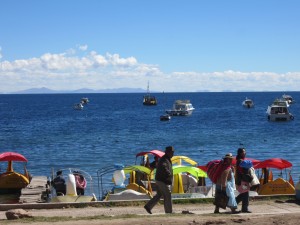 As he enjoyed his lunch with Helen and Aurelie, he felt thoroughly relaxed with a view of the lake, whilst watching the world go by. It reminded him a bit of his travels in Italy with pedal boats and other small boats scattered in the shallow waters of the lake. 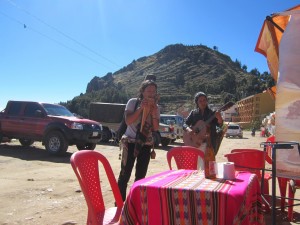 Just then, he was in for another surprise as some musicians made their way along the line of restaurants playing some traditional Bolivian folk music. This musician is playing a wooden flute especially for Lewis: what a lucky lion! 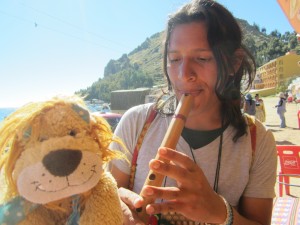 Lewis the Lion is entertained with some traditional Bolivian music

As the friends savoured this sunny afternoon by the lake, they decided to go and explore the town of Copacabana and discover what was so special about it. 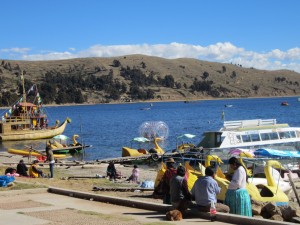 Lewis thought that staying in a hotel was a real treat and made a change from his normal routine of sharing dormitories and bathrooms with other strangers in hostels.

What would you consider is a treat for you?

Helen Molloy has been a Primary Learning and Teaching Consultant, leading on the introduction of Primary Languages in the City of Stoke-on-Trent for the past 5 and a half years. She is passionate about language learning and inspiring children into developing a curiosity and awareness of other people's languages and cultures.
View all posts by Helen Molloy →
This entry was posted in Lewis' Blog and tagged Bolivia, children's travel blog, Copacabana, educational travel blog for children, Estrecho de Tiquina, for kids, La Paz, Lago Titicaca, Lake Titicaca, Lewis the Lion, travel blog, travel blog to inspire kids, travel stories to inspire children, travel writing for children. Bookmark the permalink.