Lewis the Lion finds out about a dog charity 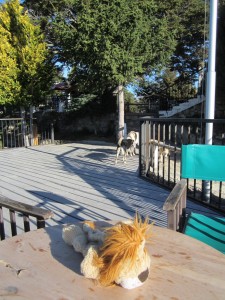 Throughout Lewis the Lion’s travels in South America he had been concerned about the many stray dogs he had seen roaming the streets. 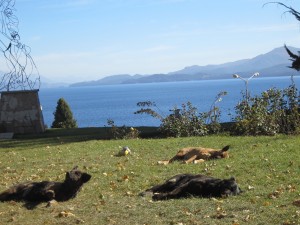 Stray dogs lazing in the sun in Bariloche

That’s why one day, as he was in his hostel, he was glad to observe a lovely lady called Silvia preparing something very special. 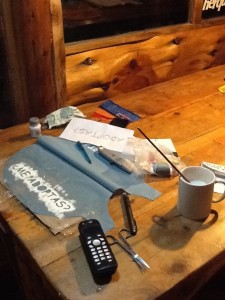 She was making some special dog jackets with the slogan “Will you adopt me?” written across them. 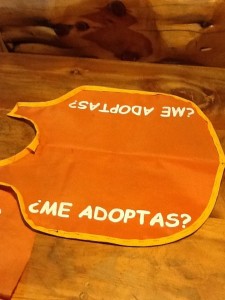 Will you adopt me?

Lewis the Lion wanted to know more about why Silvia was making these vests? She explained to him that in Argentina there was no national charity that looked after the welfare of animals. There was no such thing as cat and dog shelters where stray animals would be looked after. It was therefore down to the local community to come together to do their best for all of the stray animals. In Bariloche and nearby, there was a group of about 45 people who did their best to help these helpless animals. Their charity was called Hocicos Felices – roughly translated as “Happy Muzzles”. 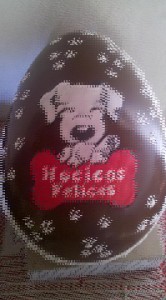 For example, Silvia told Lewis the Lion that following a volcanic eruption in the area whereby a lot of ash had fallen on the town of Villa Angostura, this group of volunteers had collected together dog food and dog litter to help these creatures in this difficult time. 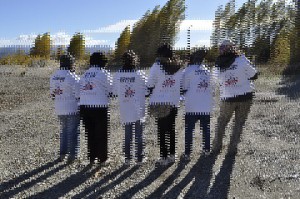 The volunteers busy together

Silvia also told Lewis the Lion that the group was campaigning for a national organisation to be set up to look after the welfare of animals, like the R.S.P.A (The Royal Society for the Protection of Animals) in the UK.

Lewis the Lion felt very impressed that people would give up their free time and energy to help stray animals and he wished them every success in their endeavours. 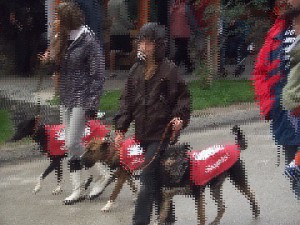 Volunteers trying to find homes for the stray dogs

What do you know about the work of the R.S.P.A. in the U.K? Find out more about what they do?

If you could give your time to help with a charity, what charity would it be and why?

Helen Molloy has been a Primary Learning and Teaching Consultant, leading on the introduction of Primary Languages in the City of Stoke-on-Trent for the past 5 and a half years. She is passionate about language learning and inspiring children into developing a curiosity and awareness of other people's languages and cultures.
View all posts by Helen Molloy →
This entry was posted in Lewis' Blog and tagged Bariloche, Charity, children's travel blog, Dog, educational travel blog for children, for kids, Hocicos Felices, Lewis the Lion, RSPCA, travel blog, travel blog to inspire kids, travel stories to inspire children, travel writing for children. Bookmark the permalink.