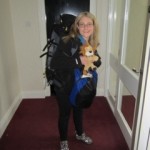 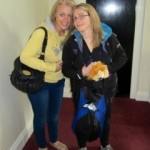 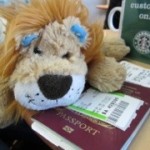 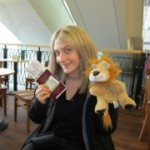 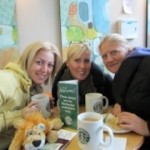 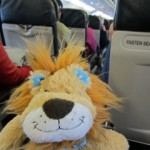 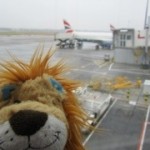 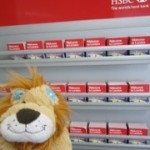 Lewis just loved the excitement of flying. As he walked through the tunnel onto the aeroplane, he was greeted by a smiley, air hostess. The aircraft was very posh with drop-down screens for the safety announcement. Lewis was told to buckle his seatbelt for the take-off and landing but it was probably best to keep it fastened for most of the flight as you never knew if an aeroplane would experience turbulence or not?! The animated safety announcement told him that he needed to identify where his nearest exits were in case of an emergency and that a life-jacket was stowed under his seat should the plane land on water. Lewis hoped that would never happen, that’s for sure! The announcement also told him that should the aeroplane experience a loss of pressure in the cabin, then oxygen masks would drop from the panel above his head and he was to put it over his head and breathe normally. The clever crew and engineers on the flight seemed to have prepared for every eventually and Lewis felt like he was in safe hands.
The captain then gave the passengers an estimated time of arrival to London Heathrow and asked the crew to assume their seats too. No sooner had the aeroplane taken off, than Lewis had closed his eyes and had drifted off to sleep. Who’d have thought that preparing for a journey could be so exhausting?! However, after twenty minutes or so, he woke up just in time for a drink of water as the air hostesses were passing through the cabin. After all, Lewis knows that it’s important to keep your body hydrated when travelling.
Before he knew it, the crew were preparing for landing, reminding passengers to stow their tables away and to fasten their seat belts. (After all the journey by plane from Newcastle to London is only 50 minutes). The landing was so smooth that Lewis didn’t even realise that they had landed until suddenly he felt his seat belt tug on him slightly as the plane sped down the runway, gradually slowing and slowing until it stopped alongside lots of other aeroplanes. Heathrow Airport is one of the busiest airports in the world and he had landed in Terminal 5, which is where many long-haul flights fly from.
He then followed the arrows as directed towards his connecting flight. A border control lady checked his boarding card again before he had to study the departure board carefully. What a mass of letters and numbers with destinations and lights flashing all the time! There seemed to be flights taking off every five minutes to destinations all around the world.
Lewis checked his boarding card carefully to see what time his flight left for Newark (which is an airport outside of New York). It was leaving at 14:40 and the departure board already told him that he had to make his way to the Gate. However it was in section B34 which meant a good twenty-minute walk to get there, including a special train ride to get there. My goodness, it felt like Lewis had arrived in a city, never mind an airport as it was so enormous! On his way to the departure gate, he saw many food and drink outlets, boutiques, currency exchange offices and duty-free shops. There were many gifts for tourists to buy, including lots of gifts with the Union Jack on them and also memorabilia for the forthcoming Olympic and Paralympic Games in London 2012. Lewis felt a bit sad to be leaving England with such an important, historic event about to take place. He wondered what children in schools in England would be doing to prepare for this event?

What are you doing in your school or at home to celebrate the Olympic and Paralympic Games?

Helen Molloy has been a Primary Learning and Teaching Consultant, leading on the introduction of Primary Languages in the City of Stoke-on-Trent for the past 5 and a half years. She is passionate about language learning and inspiring children into developing a curiosity and awareness of other people's languages and cultures.
View all posts by Helen Molloy →
This entry was posted in Lewis' Blog and tagged children's travel blog, educational travel blog for children, Lewis the Lion, London, London Heathrow, Olympic Games, Paralympic Games. Bookmark the permalink.